Waffling on the Right

Bob Ehrlich does the Maryland GOP no favors by waiting to decide about a reelection campaign. 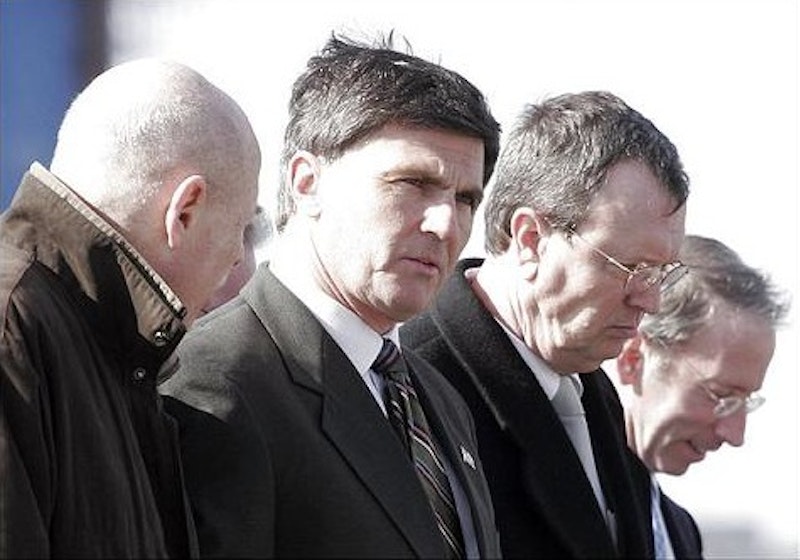 Maryland's Hamlet by the harbor, former Gov. Robert L. Ehrlich Jr., is giving the state's Republican party a serious case of heartburn. He won't say yes, and he won't say no. By now it's a familiar soliloquy. And to put the end at the beginning, if Ehrlich doesn't run for governor, the GOP has no other candidate with equal appeal.

Even the Republicans' diva of the right flank, Ellen Sauerbrey, herself twice a candidate for governor (1994, 1998), chirped recently that Ehrlich ought to make up his mind quickly. If not, the party's out of time and out of luck—if it has any left. "Frankly, I think that Bob needs to make a decision," Sauerbrey told The Washington Post.

There's no question that GOP grandees are pressuring Ehrlich to march up the hill or get out of the way. The only alternatives to Ehrlich so far are Larry Hogan, who served as appointments (patronage) secretary in Ehrlich's State House, and Towson attorney Mike Pappas. The reverse of the medal is that highly credentialed advisers who confer regularly with Ehrlich are counseling him that his chances of staging a comeback against Gov. Martin O'Malley (D) are slim to none.

There's less than a year until Maryland's 2010 primary election on September 14, just about enough time for Ehrlich to hit the re-start button and activate his campaign in-waiting. Virtually his entire senior communications staff followed him from the State House to his newly established law office after he was defeated in 2006 by O'Malley, the man he no doubt would face again next November if he were to run. But that's both good news and bad news.

Ehrlich likes a sure thing. In 2002 he benefited from an excellent political climate for Republicans. He was willing to give up a safe Congressional seat to run against Kathleen Kennedy Townsend (D) because he was convinced that he could defeat her. She began her quest to become the first Maryland lieutenant governor to win a resume upgrade ahead in the polls, ran a downright dysfunctional campaign, and Ehrlich wound up winning. He was unable to replicate that success in 2006 even with the advantage of the incumbency. And if he's even considering running in 2010, he'll be unable to rely on massive Democratic defections as he did in 2002, especially among Jewish voters, as he discovered in 2006 when O'Malley, unlike Townsend, was a thoroughly acceptable Democratic candidate.

The latest Gonzales Research and Marketing Strategies poll shows that O'Malley would defeat Ehrlich a second time by nearly double the shellacking he gave him in their first match-up. The Gonzales poll had O'Malley running at 49 percent to Ehrlich's 38 percent, a spread of 11 points. In 2006, O'Malley defeated Ehrlich by six percentage points to decapitate the only incumbent governor in the nation to lose that year.

What's even more interesting in the poll is that for all of his good-guy bonhomie and locker-room jocularity, Ehrlich's favorability rating is lower than O'Malley's. O'Malley's approval rating is 47 percent while Ehrlich's is 42 percent, a reflection, no doubt, of the overwhelmingly Democratic electorate. O'Malley's unfavorable rating is 28 percent and Ehrlich's is 26 percent. Ehrlich entered the 2006 general election with an election-week approval rating of 55 percent and still lost.

The magic number in polls is 50 percent. Anything below that is considered in the red zone. But O'Malley's running at 49 percent against Ehrlich with a 47 percent favorability rating are really a comfort zone for the first-term governor who's pushed through the largest tax increase in Maryland history ($1.3 billion) and made two major budget cuts totaling nearly $1 billion, with another $2 billion budget hole looming.

The poll numbers are only the beginning of Ehrlich's considerable woes. He lacks a support system. The Republican party in Maryland is in total disarray. Its chairman, James Pelura, has resigned and will vacate the office in November after a dispute with GOP elected officials and a vote of no confidence. The party is broke and in debt. Its registration base is shrinking instead of expanding. And worse, it has a totally inadequate farm team of candidates that it can groom and call up to fill in the blanks on its roster of candidates.

Ehrlich has tried to keep the flame glowing through his skillful and habitual use of the media, especially talk radio, which, with few exceptions, caters to a narrow conservative base. Ehrlich and his wife Kendel do a weekly talk radio show on Saturday mornings on WBAL (1090 AM) and he's frequently called upon as a commentator or television talking head.

So it should come as no surprise that O'Malley is capitalizing on the togetherness of the Ehrlichs. O'Malley, in fact, is contributing to the rumor that Ehrlich will run again as a way of stirring up his supporters. O'Malley recently has been working the phones personally with supporters across the state for an early round of fundraising. To which he adds, in a rough paraphrase: Ehrlich is going to run. Kendel's angry that he lost the last time and she's pressuring to run again and vindicate himself. I need your help, and your money, etc.

But if Ehrlich does run he'll be doing so against a unified Democratic party with no serious challenges across the familiar line-up. O'Malley is unopposed at the moment and the only serious primary threat could come from two former county executives, Douglas Duncan, of Montgomery County, or Wayne Curry, of Prince George's County. Either one (or a tandem ticket) could force an expensive Democratic primary for O'Malley. Comptroller Peter Franchot, Democrat from MoCo, has made peace with O'Malley and is running for reelection. And add to the top of the ticket Sen. Barbara Mikulski (D), whose favorability ratings in the Gonzales poll are the highest of any politician in the state at 64 percent. They all add up to a solid Democratic vote.

The rules of politics are the rules of the marketplace. Ehrlich probably would have no trouble raising the money to finance a campaign reprise. He raised and spent $18 million in 2006 in losing to O'Malley. And he now heads the Maryland office of Womble Carlyle, a South Carolina law firm that represents major gambling interests across the country and is headed by former South Carolina Gov. Jim Hunt (D). Its website lists offices in cities across the south as well as in Washington, DC and Baltimore.

But the numbers tell the dark side of the Ehrlich comeback conundrum. Democrats in Maryland now outnumber the combined total of Republicans and Independents by more than half a million. There are now more than 1.945 million registered Democrats, 926,743 Republicans and 531,000 independents, according to the State Election Board. To win, Ehrlich would need big chunks of both the Democratic and Independent votes and that seems unlikely unless there's a major split in the Democratic party, which no one anticipates at this juncture.

Frank A. DeFilippo has been writing about politics for many years as an award-winning Maryland State House and political reporter, White House correspondent for the Hearst News Service and as a columnist and contributor for several newspapers and magazines as well as a TV and radio commentator. DeFilippo has reported from six national political conventions. He is author of the novel, Hooked.