The latest iteration of the abortion debate pits Democrats against each other  with health care reform as the battlefield. 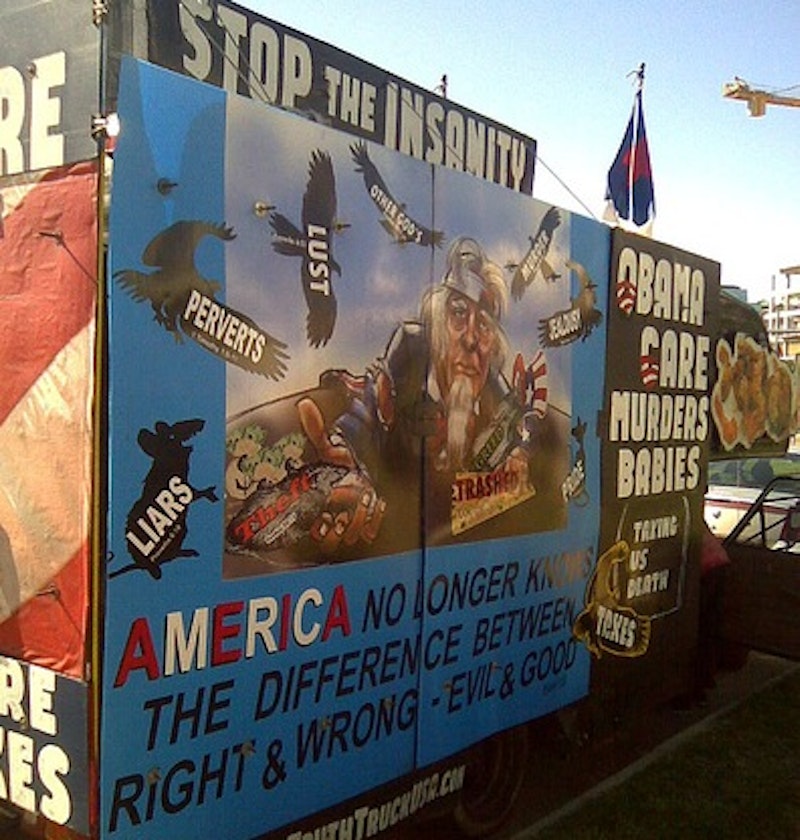 Politics and theology are a toxic mix. So, too, are ideas and ideals. For the most part they should butt out of each other’s business. Politicians won’t abide by theologians’ homilies and theologians won’t satisfy politicians. And ideals often get in the way of good ideas getting done.

Yet on matters of ethics and faith they often cautiously intersect. In a pluralistic society, religion and politics co-exist in an uneasy relationship mainly because of the IRS and churches’ 501(c) 3 tax-free status. And don’t forget the First Amendment. There’s no space for Savonarola, the mad monk who launched the Inquisition, or an auto de fé in America in 2009, although some wingnuts would probably like to revive both the monk and the deadly practice.

When Jesus said, “Render to Caesar the things that are Caesar’s and unto God the things that are God’s,” He was talking about separation of church and state. The central teaching of all major religions—whether it be of Jesus, Moses or Mohammed—is love and help each other and not intolerance, hate and ostracism.

And so it goes with the issue of abortion which, along with same-sex marriage, are the two main building blocks of the new theology of Christian conservatives, two words forming an inherent contradiction that are becoming increasingly difficult to reconcile. The Roman Catholic Archdiocese of Washington, for example, has warned that it will discontinue its social services programs unless the District’s proposed same-sex marriage law is changed to accommodate its teachings on homosexuality or it is exempted from the law.

And in welcoming Anglicans to the Catholic Church who’re disaffected over gay marriage and ordaining women, Pope Benedict XVI was not acting as a pastoral proselytizer as much as he was embracing homophobes and anti-feminists. The latest manifestations of the occasional cosmic collision between church and state are over the eponymous Stupak amendment to the House version of the health care reform bill and the efforts of the Roman Catholic hierarchy to prevent what amounts to nothing more than truth in advertising.

Sponsored by Rep. Bart Stupak (D-MI), the amendment would prohibit elective abortion coverage in the public option portion of the bill and bar federal subsidies for plans that include abortion purchased through the new insurance exchanges. Those who oppose the amendment argue that the language goes beyond existing law. The amendment was adopted after a furious round of lobbying by the U.S. Conference of Catholic Bishops who, in one of those toothsome twists, support health care under the rubric of social justice but who oppose abortion (or the right to choose) in the name of right to life.

The second celestial collision of faith and politics hits closer to home. Legislation pending before the Baltimore City Council and the Montgomery County Council would require truth in advertising at pregnancy counseling centers run by anti-abortion groups.  In Baltimore, the clinics would be required to post signs so women don’t mistake the counseling centers for clinics that perform abortions. And in Montgomery County, they would be required to give disclaimers to women so they don’t mistake the purpose of the counseling center. These are nothing more than, say, the health warnings on cigarette packages or wine bottles. The Catholic Church opposes the proposed law but supports continuing the blatant deception. In fact, the archbishop of Baltimore, Edwin F. O’Brien, has said he will consider suing the city if the law is adopted.

The Stupak amendment has grave legal implications for Maryland and 16 other states that provide abortion money under Medicaid if there is a serious threat to the life of a pregnant mother. That prerogative derives from the Hyde amendment that allows states to provide such funds out of their own treasury although the use of federal funds for abortions is prohibited. Some argue that the Stupak amendment might go beyond that to deny states the right to provide abortion funds. Maryland’s attorney general has been asked for an opinion on the matter.

Those who oppose the Stupak amendment argue that it would deny access to abortions for low and moderate-income individuals that the health care reform bill is designed to help. The present Maryland law was adopted in 1991 and approved by the voters on referendum in 1992 by a vote of 52-38 percent. It states that abortions are legal if, in a doctor’s judgment, a fetus is not viable, i.e., able to sustain life outside the womb.

The terrible tug now facing Democrats in Congress is whether to suck it up and allow health care reform to pass with the Stupak amendment, if it comes to that, or stick to hard-headed principle and possibly allow the legislation to die, the snare Republicans have set. There are many people who oppose abortion but who support a woman’s right to choose. Republicans love to portray Democrats as the party of abortion on demand. They are not. There are ample safeguards and definitions in Roe v. Wade as well as in Maryland law to prevent indiscriminate abortions.

Both President Barack Obama and Vice President Joe Biden are pro-choice, although Obama’s position is more nuanced to include family planning and fatherly responsibility, in a Bill Cosby kind of way, for children born without benefit of clergy. Obama and his family, after all, resemble nothing if not the Huxtables.

The issue of abortion is front-and-center and will remain an above-the-fold topic until the health care reform issue is resolved one way or another and probably emerge occasionally long after that. Remember a little more than a year ago when several Roman Catholic bishops pounced on House Speaker Nancy Pelosi (D-CA), who’s ardently pro-choice, for apparently misrepresenting Catholic doctrine (quoting St. Augustine, based on the writings of Aristotle.) Pelosi also daringly tossed in, for good measure, the matter of “free will.”

And it surfaced, ever so briefly, when one bishop suggested that Biden, a Catholic and father of four, should avoid taking communion because of his pro-choice position. And in 2004, Democrat John Kerry was scolded by bishops and told not to participate in the sacrament of Holy Eucharist. Republican Rudi Giuliani received similar cold-shoulder treatment from the bishops but proceeded to take communion anyway.

Most recently, Rep. Patrick J. Kennedy (D-RI) has been engaged in a public feud with Roman Catholic Bishop Thomas J. Tobin of Providence, RI, over abortion and the health care reform issue. The bishop has publicly questioned Kennedy’s faith and said he should not receive communion. Kennedy had criticized church leaders for opposing health care changes unless they included tighter restrictions on abortion. An angry Tobin has demanded an apology.

Abortion is probably the single-most combustible issue where many Catholics and Protestant evangelicals intersect, by emotion if not doctrine. It has become a regular occurrence around election time when many Catholic clergymen read from their Sunday pulpits admonitions that members of the faith cannot, in good conscience, vote for candidates who are pro-choice or who support abortion (there is a difference) or risk excommunication, kind of like subordinating country to church teaching.

Evangelical Protestants, who represent many denominations and are not centralized, regularly vent on television about the evils of abortion, i.e., family values, and stem cell research, but in a curious twist, unlike the Catholic Church, continue, in many cases, to support capital punishment. To them, and even many Catholics who dispute church doctrine, all life is not equal. Religionists like to talk about a “culture of life.” But there’s nothing more sustaining to the culture of life here on earth than adequate, affordable health care.