Matthew Continetti has little in common with talk show hysterics, but he’s virtually signed on to a 2012 Palin presidential campaign. 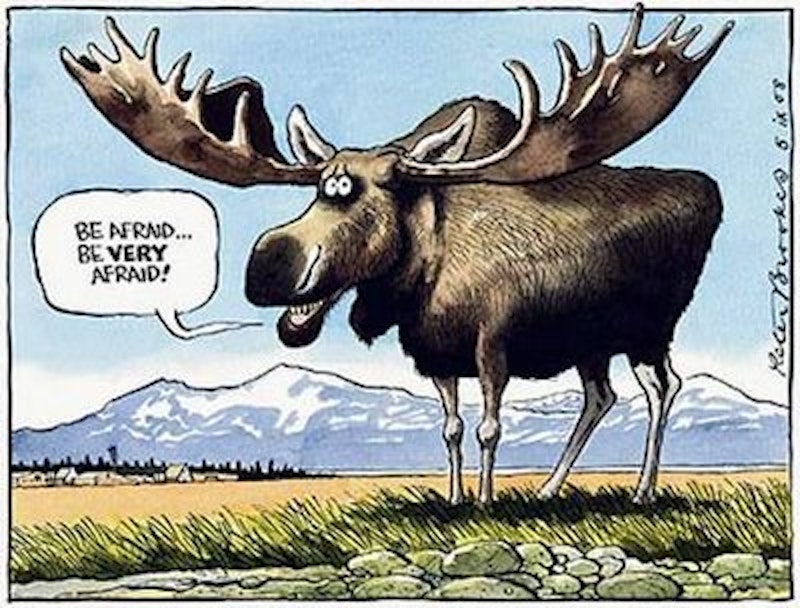 There’s no pleasure in criticizing a journalist whose work is, by and large, admirable, but recently I’ve felt like a rubber-necker at the scene of a nasty car accident as Matthew Continetti, associate editor at The Weekly Standard, has publicly auditioned for a key role in Sarah Palin’s likely 2012 presidential campaign. It’s my hope that the GOP will dodge the Palin bullet, sooner rather than later, as she embarks on her much-ballyhooed book tour promoting the score-settling Going Rouge and the former Alaska governor inevitably makes a series of gaffes that will relegate her to the status of a really, really popular reality TV show star—but I suppose it’s too early to discount any candidate, no matter how discredited.

The 28-year-old Continetti, whose The Persecution of Sarah Palin was just released, has, in a Nov. 16 Standard cover story “The Palin Persuasion” and Nov. 13 Wall Street Journal op-ed, “Can Sarah Palin Make a Comeback” laid out a very thin case for Palin inspiring a populist movement in the United States that, on behalf of “average Americans,” will topple the elites that rule both the Democratic and Republican parties. It’s a bit strange that Continetti, a prolific writer who works in Washington, D.C., and is a graduate of Columbia University—therefore a de facto elitist (or at least part the political/media establishment he derides)—is making the case that Palin is an heir to the populism of Andrew Jackson, Williams Jennings Bryan and Ronald Reagan, but there are worse ways to put bread on the table.

Leaving aside Jackson and the thrice-failed presidential candidate Bryan, where Continetti’s argument falls apart is in his comparison of Reagan and Palin. In the Standard he wrote: “Cosmopolitans detested [Reagan in 1980] because he represented the provincial folkways of small town America.” While it’s true that liberals scoffed at Reagan’s supposed lack of intellect when he ran against the hapless Jimmy Carter in 1980 (a year before Continetti was born) and that the 40th president didn’t attend an Ivy League college, he was no stranger to the powerful, and elite, individuals and institutions that Continetti hopes Palin and “the folks” can beat back with her alleged surfeit of “common sense.”

Palin didn’t even finish her first term as governor of Alaska, resigning earlier this year with no coherent explanation. By contrast, Reagan was, by the time he ran against Carter, a well-known Hollywood figure, television spokesman for General Electric, two-term governor of California and came close to defeating the incumbent Gerald Ford in the ’76 GOP presidential primary. He wasn’t so much a populist as a hardline conservative—the deserved beneficiary of Barry Goldwater’s unsuccessful but extraordinarily influential ’64 campaign against Lyndon Johnson—who also had the fortune to run against a Democrat hobbled by a miserable economy and the Iran hostage crisis. Reagan had been collecting Republican chits for years before his ’80 victory and unlike Palin (and Barack Obama, for that matter) was a well-known political commodity. Last year, Palin was inexplicably plucked from obscurity by a befuddled John McCain (a blot on the Arizona senator’s legacy that might be worse than his crusade for campaign finance “reform”); Reagan governed California for eight years.

At least Continetti admits that Palin has yet to articulate a conservative agenda that will compete with Obama’s indecisive liberalism, although he made me gag by writing that the Alaskan, “has an intuitive faith in builders and traders, in hockey moms and plumbers.” I’m not making this up. He ups the ante even further, with perhaps unintentional condescension, saying that while “bankers drive economic policy, Joe Six Pack is left out in the cold.” He also writes, “Palin has Jacksonian instincts, but she still hasn’t forged her own political persuasion. Time to add flesh to the bone.”

And that’s what Continetti does, suggesting various stances Palin could take on health care, energy, punitive regulation, the folly of “green” band-aids, the bailouts of corporations and “let[ting] new businesses replace the old.” In his Journal article, Continetti is even more blatant in his unofficial role as Palin’s aide/cheerleader by offering the mooseburger chef advice for talking points on her book tour. While acknowledging that Palin’s favorable rating in an October Gallup poll was an abysmal 40 percent and an electorally impossible 48 percent unfavorable tally among independents—the key to any election, as Democrats found out to their horror in New Jersey and Virginia earlier this month—Continetti’s confident she can turn that around.

She might mention … that the Democrats’ health-care plan would hike taxes, raise the cost of doing business, and lead to rationing down the line. She might point out that, on top of health care, the stimulus and bailouts, President Obama’s 2010 budget will further bury the United States in debt. Every time the media [which admittedly had great sport ridiculing Palin in 2008, often unfairly, although she provided plenty of ammunition] try to shift the conversation to personal gossip or past mistakes, Ms. Palin should pull it right back to how the Obama agenda will hurt the middle class. Oprah will be aghast. The Democrats will be outraged. But independents will be listening. And the rehabilitation of Sarah Palin will have begun.

I happen to agree with most of Continetti’s economic views, but he’s signed on to the wrong candidate, a woman who’s so politically damaged, so close to a national punchline, a joke, that it’s inconceivable, as he insists, “independents will be listening [to her].” Granted, Continetti has carved out his journalistic niche as a Palin advocate, and I wish him the best on his book sales, but if he has as much common sense as the “average American” he extols, he’ll sock away the profits since being tied to Sarah Palin isn’t the wisest career path.