"The Media," Now in Scare Quotes

Almost everything is mainstream when it comes to news media. 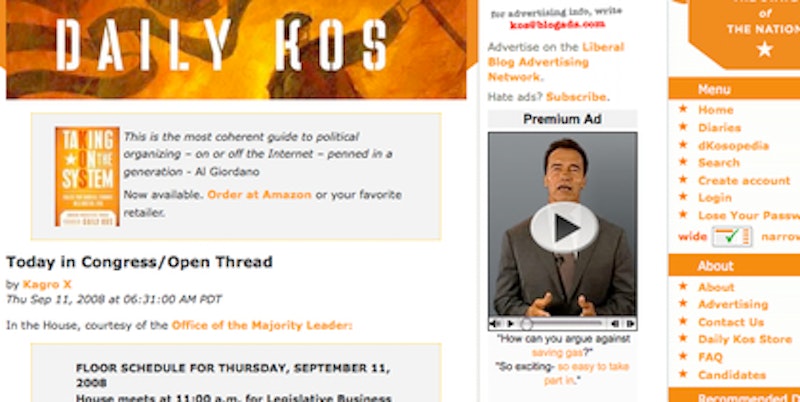 If the controversy surrounding Sen. John McCain’s selection of Sarah Palin signifies anything, it’s the reality that when anyone—pundits, surrogates or the candidates themselves—argues about a “media bias” or says anything with the phrase “the media,” you the viewer are being presented a vague, and sometimes unhinged, line of thought.

We’ve reached a full saturation of “media” in terms of the mainstream and online media. There is no dog, and there is no tail. The two halves now look like a snake swallowing itself.

This is not altogether a bad thing. More voices mean more opinions, and you can’t fully stop self-serving/self-referencing/self-congratulatory tendencies. Blogs finagle their way past the mainstream media all the time and the mainstream heavyweights can and will offer vital context for all the flotsam and jetsam on our computer screens. The problem we’re seeing—and it is a serious one that is at heart of politicking—can be best described by a new status quo: references to the “media” no longer frame the debate; they muddy it further.

If influential blogs—say, Drudge, Daily Kos, National Review Online or Talking Points Memo—go out and say “X, Y and Z,” it’s now assumed then “the media” is saying “X, Y and Z” with the same certainty as when The New York Times, The Washington Post, The Wall Street Journal or Anderson Cooper says it. Score one for independent online media, brushing shoulders with the bigfeet and driving the news machine. Everyone benefits from this. But in the context of a high-octane presidential election cycle, everything related to “media” is blown out of context and as such attacks on the “media” are employed to shift the debate away from substantive topics.

Blogs can now sometimes generate more buzz than the newspapers, and in the maelstrom of the 24-hour news cycle, campaigns must respond to trends that break solely on the Internet as well as in established outlets. Talking Points Memo was all over the possible confusion in the McCain camp over a photo of Walter Reed Middle School (note: not Walter Reed Military Hospital), prompting the McCain campaign to comment.

It doesn’t help when the mainstream media feels the need to overtly play watchdog over what’s important and what is not. The New York Times ran a front-page story on Palin’s newborn child, Trig, a story that was a thinly veiled response to rampant rumor mongering among bloggers—and parts of the more mainstream media—that insinuated that Palin was not the mother of the child. Instead of offering context, the piece only fanned the flames of umbrage over the media’s alleged negative attacks on Palin.

Fair enough, as an Obama supporter I’m down with parsing through rumor-filled news cycles, but the fact that the Times put this story on the front page demonstrates how print and online media butt heads and continue to contradict each other. And though in this case I’d normally say, “competition is good,” the result is an exponentially convoluted system of debate and vetting that undermines the values of traditional and non-traditional media. The discerning viewer/reader is left with nothing more than talking points and self-referencing news cycles that fade out within a day.

This is not a new concept, of course. But these battles are now driving the presidential election cycle into the muck—more so than usual.

When McCain campaign manager Rick Davis implied that Palin would be available for interviews only when she was treated with “respect and deference,” he blatantly conflated all media outlets—independent and established, raunchy and fair-minded—with “the media.” Yes, some people out there said some pretty awful stuff in regard to Palin and her child. But the Obama camp came right out and said that candidates’ families were off-limits; apparently when you have a news media monster to slay, it doesn’t matter if your opponent is calling for fair play. Davis and the campaign sure weren’t happy over this exchange between CNN’s Campbell Brown and McCain aide Tucker Bounds. In short, Bounds was pushed all over the ring, and the campaign pulled Palin from an upcoming interview with Larry King that night. To block quote Slate’s Jack Shafer:

A politician can't launch an effective anti-press campaign until he attracts the sort of coverage that he's able to frame as unfair or inaccurate. Sarah Palin was doubly blessed in the last week, as the press asked questions about Bristol Palin's pregnancy and completed the vetting that the McCain never really started. Last night in her acceptance speech, Palin seized the advantage with this opening dig at the press:

Never mind for a moment that her running mate has long sought—and secured—the good opinion of Washington reporters and commentators. If Palin had a prayer of winning the blessings of such conservatives as Charles Krauthammer and David Frum, let alone political reporters, she'd be slathering them with flattery. Because she doesn't, she's turning the negatives reported in the press (lack of experience, mediocre résumé, beneficiary of tokenism) into her positives. The press is only attacking me, she grins, because they're partners with the elitists who fear that John McCain and I are coming to Washington to tear their playhouse down.

Studies and numbers show that more and more people use the Internet for their news source, but what is equally important is how the cycles of online, print and broadcast media have intertwined to the point where there is little to differentiate between them.

With Palin, the fact that she was apparently not, in any substantial way, vetted by the McCain campaign is reason enough to expect a media examination of colossal proportions. This doesn’t necessarily excuse gross intrusions into her family life, but according to Meg Whitman, McCain’s National Co-Chair and former CEO of eBay, “it’s completely fair for the media to vet Sarah Palin just as they did Barack Obama and John McCain and everyone else who is running for office.” Whitman argues that the media should not pre-judge Palin, but ultimately disagrees with the charges of sexism and/or unfairness.

The McCain campaign is going to attempt to milk this media “backlash”; the candidate will try to force the public to view the media—every last head of the hydra—as being in cahoots to attack Palin. This is as arrogant and misguided a strategy as the Palin pick was hasty and ill planned.