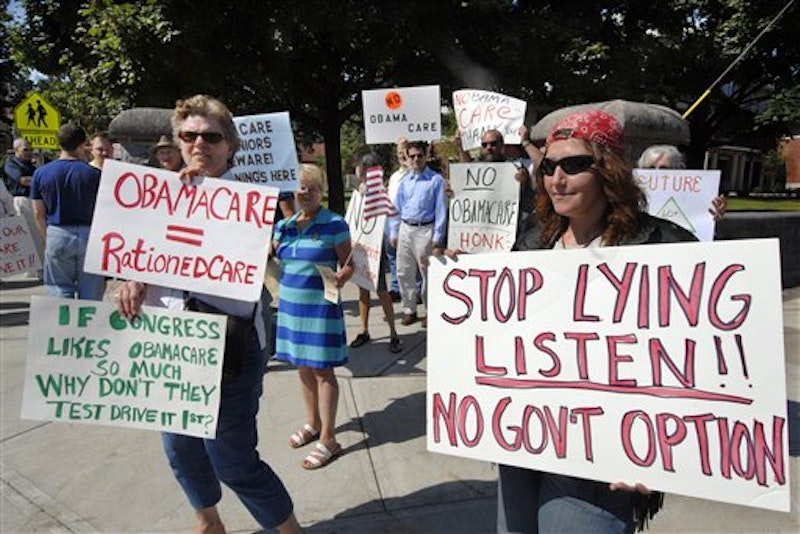 A 22-year-old dies from Wilson’s Disease, which causes lethal amounts of copper to accumulate in body tissues, straining and eventually destroying the liver. Wilson’s is easily treatable by Penicillamine and a handful of medicines, but they aren’t cheap. He was having trouble finding steady work, and his coverage under his parents’ insurance had expired. He couldn’t afford a consistent treatment regimen, and by the time he made it to a doctor the message was clear: you’ve done too much damage to be thinking about anything other than a transplant, but due to your own neglect in taking your pills, there’s nothing we can do.

Or is there? I’m sitting here thumbing through the 1018-page proposal that’s been the center of attention on Capitol Hill these last several weeks, and I wonder if maybe this is what we can do. Perhaps it’s the answer to our healthcare problems. But while America’s Affordable Health Choices Act of 2009 (AAHCA) has a plethora of initiatives to be fought over, the implications for our future policy climate created by the partisanship itself is getting inadequate attention.

There’s a lot of context behind this, but in brief: Obama and his Democrats need a win because of downward-creeping public opinion polls ready to accelerate with a failure on one of his big, defining issues. Within a year of his inauguration Americans will want to see him deliver on a major campaign promise. Policy victories that confirm Justice Sotomayor or redraw the borders of the shared White House-OEOB vegetable garden will be insufficient. It needs to have teeth—something people can run up their flagpole of Change.

Republicans, by contrast, need something—anything—to help them dig in. Reeling from the trifecta of landslide electoral defeats in the last two national elections, the burial of compassionate conservatism, and the uncomfortable hypocrisy of several high-profile personal scandals, the GOP needs some traction. Being policymaker means you get caught holding the bag; it’s a lot easier to criticize proposals than craft ones of your own, and it always will be. AAHCA is a chance for Republicans to circle the wagons and—in Bill Kristol’s words—“kill it.”

So we’ll see legislators internalize every word of the proposal in order to win support for their cause the way informed, election-conscious politicians do, right? Wrong. It’s remarkable that so few claim to have actually read AAHCA. Of course, I can understand if the Californians and Floridians were saving it for a good beach read over recess, but shame, land-locked Nebraskans, shame! And with the condensed discussion draft still shorter than Order of the Phoenix (by a couple of pages) there’s really no excuse.

I’m not naïve enough to believe that all our representatives read everything they vote on. I do not, however, think one’s lack of first-hand knowledge should be the window of opportunity for a reversion to the partisan script.

Let’s start with the Democrats. If the ideas in AAHCA are so great, then find a way of explaining them to us in sensible, simple terms. If I am being sold a car that I’m going to drive for the rest of my life, I’m more interested in engine-life and the cost to buy it and maintain it than I am in its handsome shade of green or 37 cup holders.

And Obamacare is no different. It seems every time I turn on my TV the President is talking about 47 million uninsured or telling the rest of us that “if you like your current health care plan, you can keep it.” He’ll tell me what reform won’t do, he’ll tell me what it will do, and he’ll deftly sweep the “how” under the executive rug. It’s time he stop pretending that anything with a trillion dollar price tag on it won’t involve sacrifices.

Discontent with Democrats aside, it’s the Republicans that I’d like to focus on. They are showing what can only be described as a toddler’s capacity to brandish the word “No!”—and this deserves some attention because it’s looking more and more like a fatal blow to reform rather than simply to Democrat-led reform. Absent a unified stance on the issue, the GOP thus far seems happy so far to stick with “make me.”

And sure, on principle this isn’t so bad. True, recent deals mean Obamacare won’t necessarily bankrupt the pharmaceutical and biotechnological industries because the Dems have sensibly backpedalled on patent protection issues. But they could bankrupt the insurance industry, and the truth is no one really knows what long-term effects government-expanding reform might have. So the ideas on the left aren’t great, but the dearth of ideas on the right is worse. Consider the possibility that the Republicans kill it like it’s 1994:

(1) flat-lining wages, (2) exploding Medicaid and Medicare costs and thus immense pressure for future tax increases, (3) small businesses and self-employed individuals priced out of the insurance market, and (4) a lot of uninsured people imposing costs on hospitals and local governments.
He’s also right to note that the GOP’s victory can only come by exciting people’s distaste for healthcare reform at large. It will come by convincing people that they will lose their doctors and that Obama will reduce their coverage. Ultimately, no one wins here. Bad reform is shot down, yes. But sensible, desperately needed reform is off the table and the doomed existing system becomes further entrenched. And that’s something that none of us can afford.

With this in mind, a couple of guidelines for conservative policymakers:

1. Accept the ends, rewrite the means. You mostly agree that healthcare premiums are increasing at unsustainable rates. Say so. People need to hear that Republicans want to improve the system for people, too.

2. Develop policy alternatives. Part of the work is already done: the issue is highly salient and commands enormous public attention. All you need to do is explain why your ideas and alternatives are better. And they are. You want to put the brakes on a Democratic initiative, but without viable policy alternatives no one benefits and you just look out of touch with very real public anxieties.

3. Avoid labyrinthine, sweeping reform. It’s hard to make broad reform good, and quality is no guarantor of legislative success anyway. When politicians and the public don’t have a grasp of the issue they argue what’s familiar, and that rarely produces the best policy outcomes. More back-and-forths of “you’re stupid” and “you’re selfish” won’t get us very far.

4. Incremental healing, baby. Initially undertake highly visible, quick returning policies on a low level, incrementally moving to more removed policy initiatives when you garner public confidence. For instance, start with a Capretta-esque elimination of dual-eligibles and reallocate funding toward an income-contingent expansion of Medicaid. Then after improving the federal programs we already have can we move to longer term supply-side efforts like targeted research funding for Comparative Effectiveness Research.