The End of Camelot … For Now

Patrick Kennedy’s ignominious departure from public life doesn’t signal an end to his family’s political birthright. Just wait for the next Kennedy generation. 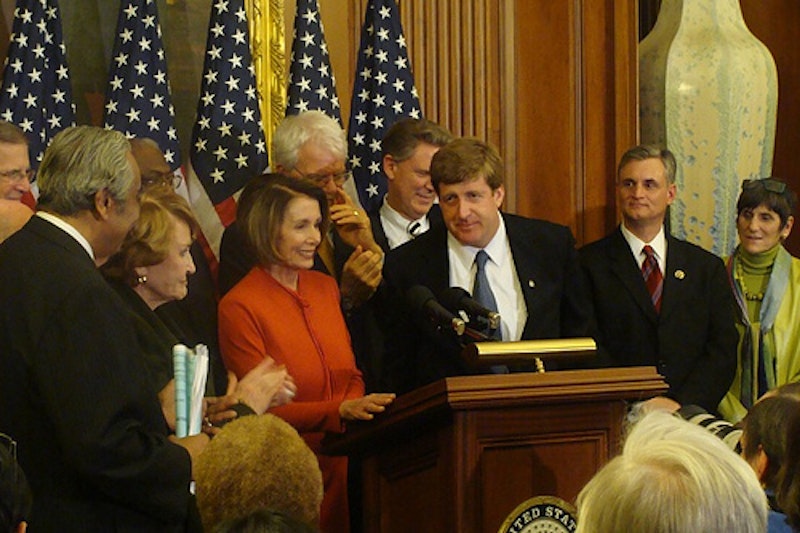 Heard any good Patrick Kennedy jokes in the last week? Nah, me neither. That’s an indication, really, that the eight-term Congressman from Rhode Island, who announced last week he won’t run again for the House—citing chronic depression and grief over his father’s death last summer—is too pitiful and irrelevant an elected official for anyone but the most hard-up comedian to bother with. I suppose that in a less frenzied political environment Kennedy’s announcement, say three or four years ago, would’ve stirred up at least a mini-beehive of interest, but with much larger targets such as Sarah Palin, Harry Reid, Richard Shelby, Rahm Emanuel and even Barack Obama to lampoon, the late Teddy Kennedy’s youngest child is just the equivalent of near-beer.

There was, of course, a smattering of analysis in the steno-pad Beltway-centric media, about the latest Democrat to call it quits rather than risk embarrassing defeat at the polls this November, most of which followed a surprising poll released on Feb. 4 by the Providence TV station WPRI that showed almost 60 percent of registered voters in Kennedy’s district would “consider” voting against Kennedy. Apparently Rhode Island—a strong Democratic state where the Kennedys, even at this late date, were still revered as demi-gods—feeling a whiff of Scott Brown-mania, was finally ready to toss overboard the 42-year-old Kennedy, whose main contributions in public life were revelation after revelation of his shabby treatment of women, rehab clinic stints, rare but incoherent speeches on the House floor and using his name to raise money for other candidates in his party.

It’s possible that Patrick, fearing debates against GOP candidate John Loughlin, a Rhode Island state legislator who’s been described as charismatic and served in the National Guard (a huge plus), decided, perhaps like Connecticut’s ethically-challenged Sen. Chris Dodd, to sacrifice himself for the greater good of his party, but that doesn’t smell right to me. If you can name a single Kennedy, the vast majority of whom dress in entitlement threads from head to toe, who’s thought of anyone but himself—and that’s genetic, going back to patriarch Joe and icons JFK and RFK—well, that’s a nifty conversation starter.

Nonetheless, even the man the Boston Herald’s Howie Carr derisively dubbed “Patches” years ago was still fodder for several mournful stories about the fade-out of America’s most storied political family in the 20th century. The headline above Karen Tumulty’s mawkish Time blog post last week about Ambien’s worst nightmare read, “Patrick Kennedy Brings an End To a Dynasty”; AOL News’ offering was “Patrick Kennedy: Last of Political Dynasty”; and The Boston Globe, for my entire life a Kennedy family enabler, ran a Feb. 14 editorial titled, “As the Kennedy era ends, Kennedys continue to serve.” This was an opinion not to be read on a full stomach, so sycophantic and hagiographic was the prose. The writer, saying that Patrick “remains a work in progress,” will now return to the “familiar turf” [no, not the local surf & turf sports bar] of “serving as an advocate for people with mental illness and autism,” like many of his cousins. Incredulously, the editorial continues: “Their dedication, at a time when they could have easily have traded on their names to join hedge funds and international conglomerates, stands out as an admirable show of commitment.”

I realize that today any young man or woman who’s so gauche to work with a hedge fund (the “Wall Street vs. Main Street” hobgoblin) is considered a felon-in-waiting, but let’s back up and recall that Joe Kennedy, in the early part of the 20th century, made a fortune as a bootlegger, Hollywood impresario and canny stock market investor, thus assuring that his descendants wouldn’t be saddled with the indignity of an income-producing job. Sure, in any large extended family, there are bound to be selfless individuals who remain in the background, but in the Kennedy family they’re the exceptions.

The Globe, feeling no necessity to name names, refers to Bobby Kennedy’s two eldest sons, Joe and Bobby, Jr., the former for “providing low-cost heating oil to the poor,” and the latter for his “environmental consciousness” (except when it comes to messing around with Nantucket Sound). Joe, a former Congressman, flamed out as a politician, embroiled in marital and church controversies, and his “brand” was sullied. Bobby Jr., maybe the brightest of the lot, served as one of Uncle Ted’s main advisers in the Senator’s failed 1980 attempt to wrest the Democratic presidential nomination from the hapless Jimmy Carter (which says something right there), and considered by the legions of Kennedy acolytes as future steward of Camelot, was laid low by a public heroin bust. That he was a junkie while making riveting speeches for Ted in ’80 (I saw several of them, and the guy was, as they say, a natural) definitely demonstrated his ambition and physical fortitude, but let’s not swallow the myth that he initially preferred cleaning up the Hudson River to politics.

And, not to pile on, but then there’s Caroline Kennedy, the martyred president’s daughter, who, after keeping a low public profile most of her life, last year practically demanded that New York’s Gov. David Paterson appoint her to fill the vacant seat of Hillary Clinton. After a torturous series of rambling interviews, which exposed her inexperience, she withdrew, citing, but of course, “family reasons.” As all but the most reverential will admit, there’s no shortage of hubris in the Kennedy clan.

Which is why I don’t believe that Camelot, or the “dynasty” has come to an end with dim Patrick’s upcoming departure from Congress. It could be that the Joseph and Rose Kennedy’s grandchildren have failed—not unlike FDR’s kids—to inspire the devotion of JFK and RFK, and, to a degree, the blemished Teddy, but the next generation has yet to be heard from. And when one or more of them (those who manage to keep their noses clean) emerge, which could erupt at any time, there will be stories galore that proclaim, “Camelot Reborn: America’s in Love With its Royal Family Once Again.”