The Day the Newspaper Died

The demise of the print media industry has been evident for years, but its rapid acceleration in 2008 is still shocking on an emotional level. 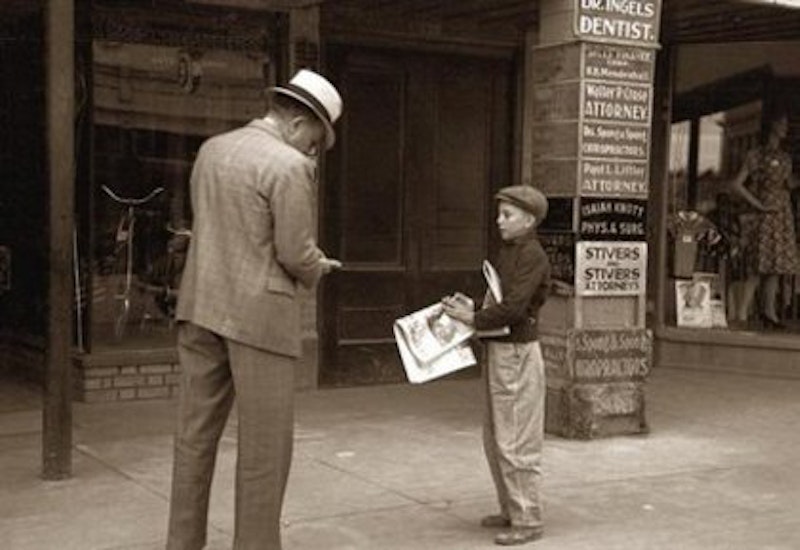 It was on Election Day, just six weeks ago, that I experienced the wistful, emotional sucker punch, a “holy shit!” moment if you will, that’s not uncommon among lifelong journalists of my age (53), realizing that the print media business was finished. I was in Manhattan, visiting two of my older brothers, and during lunch one of them volunteered that he no longer reads newsprint copies of The New York Times and Wall Street Journal more than two or three times a week. This was significant for a couple of reasons: one, my brother has religiously devoured both papers since the late 1950s, but now receives news on the three computers in his office, the “scroll” that Bloomberg provides along with prices of securities, bonds and stocks; two, if an older, male reader is falling by the wayside, what hope does the industry have?

In the past several years, I’ve told younger colleagues that print media—and if newspapers were the story of ’08, watch as glossy magazines either fold or shrink in page count by the second quarter of next year—as we’ve known it is becoming largely extinct for the simple reason that every day another consumer dies has been lost and isn’t replaced by a person just born. When I was a kid living on Long Island, my dad used to joke at breakfast, with newspapers strewn on the kitchen table, that if you wanted to know what Times icon James Reston’s latest opinion was, simply read the first and last paragraphs of his column. My mother, nose buried in the Daily News or Herald Tribune, would chuckle, as I methodically went through the funnies and sports pages, and then we’d all continue reading until it was time to catch the school bus or go to work. That memory is now as quaint as a Norman Rockwell cover illustration for the Saturday Evening Post or an Esquire treatment by George Lois.

Objectively, everyone in the business has known for several years that a tectonic change in the media world was rapidly unfolding, a process that has greatly accelerated in 2008, and most recently punctuated by Tribune Co.’s filing for bankruptcy, the Detroit Free Press’ announcement of its impending cessation of home delivery on most days, and the daily drumbeat of layoffs, buyouts and firings that are so ubiquitous that the news has all the drama of, say, the results of an NBA game.

It’s not just daily newspapers: weeklies, once known as “alternatives,” since they provided information, listings, arts criticism and the kind of long-form feature writing that the large-circulation dailies either couldn’t or wouldn’t, are in real trouble as well. Last month, when Creative Loafing Inc., a crummy mini-chain of weeklies filed for bankruptcy protection, it was likely the first major sign of serious deterioration in that print niche. The company, over-reaching, bought the Chicago Reader and Washington City Paper (disclosure: I started City Paper in 1981 and subsequently sold it in ‘87) last year and have since, through incompetence or hubris, damaged both properties, probably irreparably.

I’ve thought a lot about this, on a visceral level, since that day in New York in early November, wondering when other friends and acquaintances in the profession had the sudden flash that print was down for the count. (Not incidentally, on the Amtrak ride from Baltimore to Manhattan and back, while the vast majority of passengers were working on laptops, I wasn’t reading a newspaper, but rather re-visiting Dickens’ Great Expectations for the third or fourth time.) Michael Wolff, author of the outstanding new biography of Rupert Murdoch, The Man Who Owns the News, told me his moment came, “When I realized The New York Times was probably not going to make it, I knew the newspaper business, as we know it, was over.”

Tom Bevan, co-founder of Real Clear Politics and a resident of the Chicago metro area, also had his gut-level epiphany recently. Like others, Bevan’s followed the downward trend of print media—“disastrous earnings reports, layoffs and the like”—but told me last weekend that it was a month ago that he realized, once and for all that “newspapers are dinosaurs and this is their ice age.” He continued: “A couple of weeks ago I saw a report from Reuters that the Sun-Times media group… has a market cap of $5.4 million. I just checked this morning [Dec. 13], and its market cap is $4.1 million. The stock is now worth a nickel a share… It was shocking to see that you could buy a major American daily and all of its assets for roughly the same price as a three-bedroom condo in the new Trump Tower.”

Others came to the realization earlier than me. Kurt Andersen, a journalist, author and entrepreneur in Manhattan since the mid-1970s, said, “‘All newspapers are kind of fucked,’ I told an NYU journalism class almost four years ago. The doom probably became undeniably clear when I saw that my extremely intelligent, good-grade-receiving, high-scoring teenage daughters had no inclination to read the read the physical newspapers that are delivered to our house every day.”

My own teenage sons never soil their hands with newsprint, yet they’re reliably informed about current events, contradicting the condescending view of many of their elders that younger people are somehow not as “smart” today. During the election campaign this past summer and fall, the two of them, one favoring Obama, the other McCain, would squabble incessantly, both armed with facts and opinions they’d gathered online. The arguments were heated, which wasn’t much fun, but at least their respective partisanship didn’t descend to name-calling and insults. And, much to my pleasure they agreed that Sean Hannity, Keith Olbermann, Bill O’Reilly and Chris Matthews were, to a man, jackasses.

Nick Gillespie, editor-in-chief of Reason.com and Reason.tv, was also ahead of the pack, saying, “I can’t even remember when I realized the Age of Print had passed. It might have been in post-Bicentennial America, when the cheapskate customers on my paper route started telling me to go fuck myself and to take that rag off their porches.” Gillespie added that he hasn’t “smeared newsprint ink” in his eye for a decade now. He continued, “The only thing missing from the online environment is the smell of a used bookstore (which are also finished, done in by a wider and vaster and better selection in cyberspace) and from what I hear, that’s only a couple of years away.

Celia Farber, who was a controversial writer for Bob Guccione Jr.’s Spin in the mid-late 80s—when that magazine was a bracing alternative to the calcified and celebrity-obsessed Rolling Stone—told me that two years ago her father’s Times subscription was cut off after he’d neglected to pay a bill. “He used to spend half the day reading [the Times], then suddenly it lost its power, its centrality, and he didn’t renew.” Additionally, when Farber’s own work was criticized in the Times, after initial dismay, she discovered that few in her circle had even read the offending commentary, and “The earth didn’t change its orbit.” When she complained to a friend who was an editor at the Times, he told her, “Don’t worry about it. It’s just fish wrap.”

The New York Times, described by one of its own as “fish wrap.” A decade ago, even detractors wouldn’t say something like that. “Fish wrap,” or the alternate cliché of “lining a birdcage with a newspaper,” was once reserved for tabloids or any print product owned by Rupert Murdoch.

Finally, I made a bet with a friend last week—just five bucks, a reflection of the economy, I guess—that the Times would be sold by Dec. 31 of next year. It seems reasonable that any mogul who offers Times shareholders a premium on the price of the company’s stock, maybe $30 instead of the current single-digit figure, could break the Sulzberger family’s hold on the institution. The only flaw in my theory, which I still think is basically sound, is that Sam Zell’s nightmare with Tribune Co. has probably scared away vanity buyers—besides, the portfolios of potential individual buyers has, in most cases, taken a severe hit this year—and what other media corporation has the wherewithal to buy the Times?

Maybe Murdoch, who’d no doubt like to merge his Dow Jones Co. with the Times Co., but on the other hand, it’s just as likely the vilified Australian may decide to watch his competition just wither away.