The Best Figurehead $125K Can Buy

The State Comptroller enjoys a cool salary, incredible perks, and considerable power for doing basically nothing. 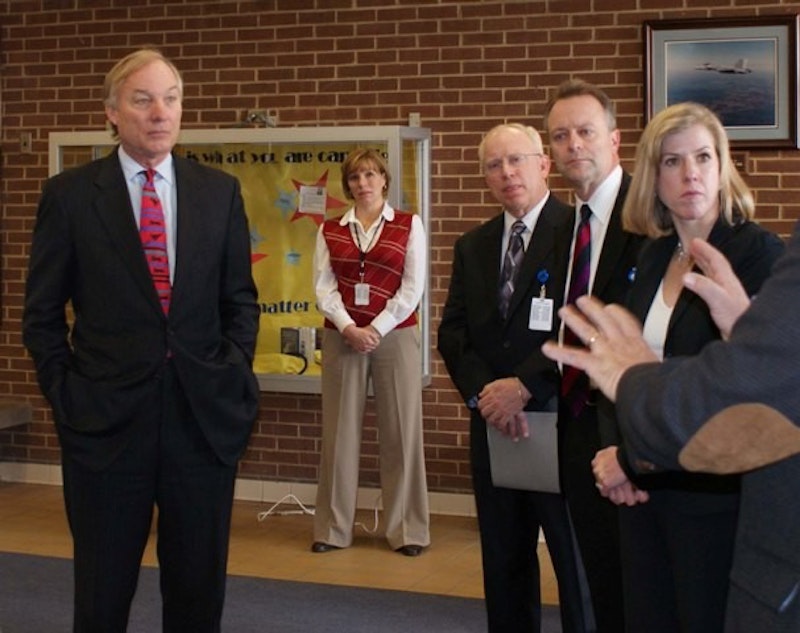 It's easy to understand why Peter Franchot is running for reelection as state comptroller. He has the best $125,000-a-year gig in Maryland politics, and the job involves virtually nothing.

Not to be misunderstood, the comptroller has several official functions, and the observation is more about the job than the man himself. He is one of three members of the powerful Board of Public works, which meets twice a month, and he chairs the Board of Revenue Estimates, which meets twice a year to deliver bad economic news. And once, maybe twice a year, the comptroller attends meetings where envelopes are opened that contain bids on state bonds. Oh, and the comptroller has a seat on the state retirement system's board. Beyond those assignments, there are lots of blank spaces in the job description.

And despite the lollygag nature of the job, Franchot appears, so far, at least, to be getting a free ride. The term-limited Baltimore County executive, Jim Smith, must not have considered the golden-years snooze of the comptroller's job when he announced earlier that he would not run against Franchot. Instead, Smith might run for the state senate, which requires actually showing up for work—at least 90 days a year.

Only a state as wealthy as Maryland can afford a virtual no-show job with a generous six-figure price tag (plus perks such as a car and driver). The comptroller's office is practically on autopilot, plugged into gizmos with names such as IBM, Dell and Hewlett Packard.

The elective office of comptroller, with its abundance of idle time, drove William Donald Schaefer (whom Franchot defeated) even nuttier. So frustrated was Schaefer that he tried to pattern the comptroller's office after the governor's (which he also inhabited for two terms), complete with a mini-cabinet and fancy staff titles. It also allowed Schaefer plenty of free time to accommodate his hobbies of cultivating African violets and making fancy candles. He also leased a customized bus for regular tours across the state.

And the late, loveable Louis L. Goldstein had the job down to a finely-tuned daily routine. He'd arrive at his office between 7:30 and 9 a.m. to personally answer his own phone for half an hour and then take off for the remainder of the day for campaigning and ribbon cuttings. And everyone in Maryland who had any contact with Goldstein marveled that he was such a man of the people that he even answered his own phone.

In fact, so amorphous and vague is the office of the comptroller that Maryland's last Constitutional Convention, in 1968, was on the verge of abolishing the office and combining its function with that of the treasurer until Goldstein got wind of the cabal and rallied his supporters across the state to protest the move.

So it should come as no surprise that when, a couple of weeks ago, Franchot announced his reelection intentions, there were no brass bands, no scrum of supporters and no staged news conference. He simply delivered the paperwork to the State Board of Elections. Franchot had worked hard to become the bad boy of Maryland politics as he attempted to expand the job description of comptroller beyond that of chief bean counter and into the intricate business of policymaking. Upon taking office, according to his website, Franchot said he "would expand the purview of the agency [and]. . .he would continue to be a strong advocate for education, health care, transportation and environmental protection initiatives as well as being the state's fiscal watchdog." It's the phrase "expand the purview" that's often gotten him into hot water in the State House

The job of comptroller gives Franchot lots of leisure time for freelance mischief making and being an all around pain in the butt. He spent much of his time prior to the 2008 election in an ear-popping campaign in which he directly challenged fellow Democrat, Gov. Martin O'Malley, on the slot machine referendum by organizing rallies and news conferences across the state in opposition to legalizing slots. (As a 20-year member of the House of Delegates, Franchot had supported slot machines.)

Recall, too, that when Franchot first took office in January 2007, he spent much of his time needling O'Malley from his perch on the Board of Public Works and in frequent news releases. The intensity of the hard feelings provoked speculation (which Franchot encouraged) that he would challenge O'Malley in 2010. But Franchot has since scaled back his public outbursts and apparently (at least publicly) has made peace with O'Malley.

The Board of Public Works' seat is the box on the government flow-chart that is the comptroller's principal responsibility and his only legitimate public forum. And therein lies the problem, Not enough to do, therefore, not enough attention. When Franchot was a delegate, his fellow House members sneered at his constant playing to the press galleries in his quest for recognition.

To compensate for the lack of visibility, Franchot employs his seat on the BPW as kind of a statewide bullhorn, often belittling his seatmates on the three-member Board—O'Malley and Treasurer Nancy Kopp—the General Assembly and anything (or anyone) that gets in his scattergun sight. Just last week, for example, under pressure from local legislators and voters, he reversed his vote to close an Eastern Shore psychiatric hospital in Chestertown and asked the Board for more time to reconsider its unanimous decision to shut down the facility as part of the recent budget cutbacks.

He has railed against state land acquisitions, he opposed the 2007 special session of the legislature, he led a moral crusade against slot machines and he fought the tax that was imposed on computer services firms (which was later repealed) as part of O'Malley's massive $1.3 billion tax increase. Franchot even went so far as to deliver his own state of the economy speech in 2008 to an assembly of Montgomery County businessmen in a bank, no less, on the very day before O'Malley was to deliver his annual state of the state address to the General Assembly.

And occasionally his tiny troop of enforcers will swoop down on an unsuspecting cigarette smuggler on I-95 or an out-of-stater stocking up on cheap booze from Maryland for the liquor locker back home. The trade-off with Pennsylvania is cheap alcohol for cheap cigarettes. A couple of weeks ago, for example, his office, acting upon a tip from the Worcester County sheriff, "confiscated 3,500 packs of contraband cigarettes along US 13, in Pocomoke City," according to the comptroller's website.

And his worst offense might have been the no-win fight he picked with Senate President Thomas V. Mike Miller (D-Calvert) two years ago over a proposed vast expansion of the comptroller's staff and budget over the objections of the governor's budget office. The request was approved, however, on the technical explanation that the comptroller is independently elected and sets his own budget priorities.

The budget for the comptroller's office is $117 million, meant to cover 1100 employees and three deputies at upwards of $150,000 a year. It was the troika of deputies that got him into trouble with Miller. Franchot, as did previous comptrollers, claims to collect $16 billion (down from a pre-recessionary $20 billion) a year in taxes. But the last time anyone checked, employers withhold taxes for the comptroller, business collect sales taxes and citizen-taxpayers snail-mail or e-mail their taxes to the comptroller's office under threat of criminal prosecution for failing to do so. A lick and a stamp are all it takes to do Franchot's work for him.

Franchot eased into the pattern of make-do busy work with bravado and flamboyance. He attended Barack Obama rallies while O'Malley was supporting Hillary Clinton for president. He attended a rally of computer service firm owners who were raising the roof about the new tax. And he even convened a bio-tech conference as evidence that Maryland is on the cusp of something or other.

With all the outside activities on his schedule, there's really no time to be comptroller. It's a good thing the job (and the Constitution) allows an absentee landlord.

Frank A. DeFilippo has been writing about politics for many years as an award-winning Maryland State House and political reporter, White House correspondent for the Hearst News Service and as a columnist and contributor for several newspapers and magazines as well as a TV and radio commentator. DeFilippo has reported from six national political conventions. He is author of the novel Hooked.