Surely He Wasn't All Bad

The Weekly Standard tries admirably to think of 10 things Bush did well, and they nearly succeed. 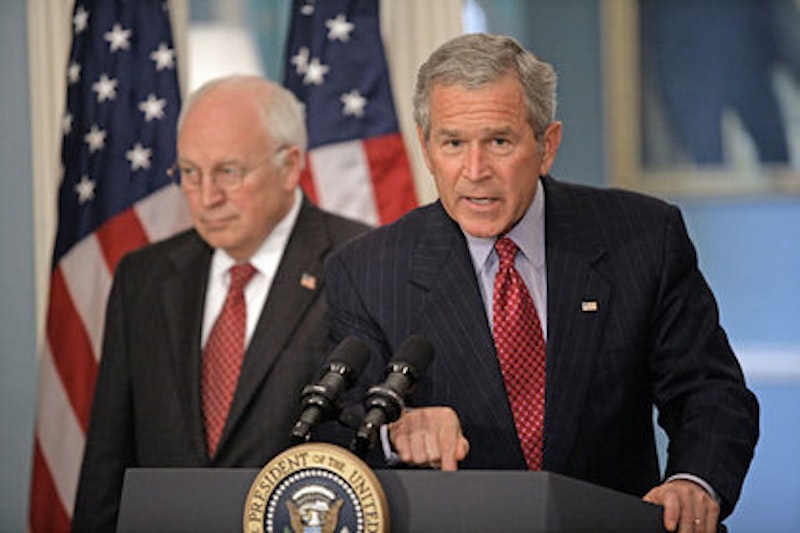 We’re in the last days of the George W. Bush presidency, and while people have been writing postmortems for Bush since 2006, it’s only now really appropriate to do so. It’s a daunting task to summarize an entire presidency in a single article, so I’m going to take someone else’s review of Bush 43 and bash it, because I am a petty man, devoid of original thought, who seeks only to tear down others. I received such motivation after reading an article by Fred Barnes in The Weekly Standard. You may know Barnes as that middle-aged, white conservative guy who appears on Fox News (he co-hosts a talk show with Mort Kondracke—a middle-aged, white semi-conservative guy on Fox News). It should be noted that Barnes was once called “the last Bush loyalist” in an article on Slate. Anyway, the article is entitled “Bush’s Achievements: Ten things the president got right.” His original title, “Ten Things I Love About Bush,” was abandoned for obvious reasons.

My initial reaction was, “Wow, President Bush got 10 whole things right? That’s 1.25 things right per year! Way to go! Here’s your tri-colored ‘personal best’ ribbon.” Obviously, Americans love things in packages of 10, so I understand Barnes’ choice. He even leaves us with the cliffhanger that Bush has “maybe more” than 10 achievements. Nice save—you wouldn’t want to go too far out on that limb.

Barnes starts by saying, “The liberal line is that Bush dangerously weakened America's position in the world and rushed to the aid of the rich and powerful as income inequality worsened. That is twaddle.” While I had never heard the word “twaddle” before, the context, to me, suggested a definition of “perfectly good claims that are worthy of investigation.” On the contrary, “twaddle” basically means “nonsense.” Barnes goes on to explain why these claims are nonsense: “[text not found].” Oh wait, that’s right—he’s writing for The Weekly Standard. No need here to explain why liberal arguments are meaningless. Onward and upward, my friends!

Barnes then praises the President’s courage, stating that he was “vilified and abused” for “defiantly doing the right thing.” I agree completely with this statement; however, I would alter it slightly by removing “the right,” pluralizing “thing,” and using some carefully placed italic font: Bush has been vilified and abused for defiantly doing things.  For example, Bush has defied the Constitution, defied known evidence, and even defied logic. But I’ll just pull a Fred Barnes here and leave that statement where it is. I want to move on to the top 10 list itself. I was pretty sure that “Remember the ingredients to a Peanut Butter & Jelly sandwich” would be on this list, but the fact that it’s not worries me a little. However, I should also state at this time that Barnes brings up some issues that I flat out don’t know enough about to support or criticize. So, I’ll just take a pass, and you can feel free to talk amongst yourselves.

Barnes begins the list chronologically (I hope) by praising Bush’s “decision in 2001 to jettison the Kyoto global warming treaty so loved by Al Gore, the environmental lobby, elite opinion, and Europeans.” I don’t know much about the Kyoto Protocol, but I know enough to acknowledge that this is a dumb statement. First of all, I love what the term “elite” has become in this country. People who own a dictionary can recall an ancient time when “elite” meant “the best of something,” but as the media taught us in the 2008 election, “elite” actually means “pompous” and “faggy.” And as for the Europeans, it used to actually be okay to at least consider policy decisions made in Europe, but today we view Europeans as a group of dandy fops who only care about the rights of same-sex terrorist marriages. But regarding the substance of Barnes’ claims, all Bush did was not submit the Kyoto Protocol to the Senate for ratification. We are still a signatory of the Treaty; it’s just that our signature means nothing until we ratify it. Bush could have withdrawn us from Kyoto altogether if he really wanted to, but I suppose that wouldn’t have been “courageous” enough for Barnes. He also argues that this stand (if you can call it that) taken by Bush allowed “time for facts to catch up with the dubious claims of alarmists,” and “[t]he skeptics, who point to global cooling over the past decade, are now heard loud and clear.” Ah, another person who heard the misnomer “global warming” and immediately thought “If this is anything short of the world getting hotter, it’s 100 percent bullshit.” Et tu, Fred Barnes? This is why “climate change” has become the preferred term—because the consensus is that the temperature is not the best indicator of dangerous climate changes.

Barnes’ number two achievement of Bush is the use of enhanced interrogation techniques, secret prisons and wireless eavesdropping. He honestly should have just put this as number one; that way, you could immediately stop taking him seriously. Actually, legally speaking, I don’t disagree with the way certain wireless eavesdropping is conducted, but regardless I would hardly call that a fantastic achievement. Barnes cites these three things as saving countless American lives. That is, “countless” because you can’t actually count them. “But as Charles Krauthammer said recently, ‘Those are precisely the elements which kept us safe and which have prevented a second attack.’” No shit, Charles Krauthammer said that? You mean, fellow Weekly Standard writer (and op-ed columnist for The Washington Post) and Fox News contributor, Charles Krauthammer? So, were you guys just having a beer when he said this? Argument successfully supported!

Barnes then quotes Lincoln from a speech defending his suspension of Habeas Corpus:  “Are all the laws but one to go unexecuted, and the government itself go to pieces, lest that one be violated?” But this argument is undercut by the fact that Lincoln then followed up by saying, “Guess what? Article I, Section 9 of the Constitution gives me a legal right to suspend Habeas Corpus in times of rebellion or invasion for the purposes of public safety, BE-OTCH!” I’m paraphrasing, of course.

Third, Barnes says that Bush has rebuilt presidential authority that was badly diminished as a result of Vietnam, Watergate and Bill Clinton. He then proceeds to discuss the expansion of the president’s legal authority without clarifying what Vietnam, Watergate and Bill Clinton had to do with that. The closest link I can think of would be the case of U.S. v. Nixon, in which the Court basically just prevented the position of president from becoming a virtual absolute monarchy, free from judicial review. Reading in between the lines, what Barnes is really saying is that these three things degraded the respect, not authority, of the presidency. You won’t hear me claim the opposite, but I would tack George W. Bush onto the end of that list of things that diminished the respect of the United States Presidency.

Bush’s “unswerving support for Israel” is achievement number four. Can’t argue with that: I find it quite an achievement when anyone, let alone the president, can blindly support Israel without even remotely considering the other side of the coin. Says Barnes, “He was clever in his support. Bush announced that Ariel Sharon should withdraw the tanks he'd sent into the West Bank in 2002, then exerted zero pressure on Sharon to do so.” Yup, Bush was clever in his empty statements. Remember when he cleverly stood in front of a “Mission Accomplished” banner?

President Bush’s fifth success is No Child Left Behind. I’m not an expert in NCLB, so I’m going to take a pass on this one. It seems to me that it has been a failure, even by its own standards: its goal of 100 percent proficiency (or even slightly lower) by 2014 is unattainable. I suppose it’s not surprising though, considering the “Texas Miracle” on which it was based turned out to be more like the “Texas Non-Miracle Bullshit.”

“Sixth, Bush declared in his second inaugural address in 2005 that American foreign policy (at least his) would henceforth focus on promoting democracy around the world.” I don’t get it; was the achievement that he simply said that stuff? Was it Bush’s grammar? Syntax? Because I can assure all dictators and anti-democratic regimes reading this article that as long as you have something strategic to offer the United States, you’re safe. Bush has proved that he was not referring to you.

Barnes’ seventh item is the 2003 Medicare prescription drug benefit. [Whizzzzzzz…] That’s the sound of something going right over my head. Sorry, I know nothing about Medicare.

Eighth is an apparent tie between the appointments of John Roberts and Samuel Alito to the Supreme Court. Two strapping, young, white, conservative lads—the Supreme Court is a woman and an African-American away from being Augusta Country Club again. With regard to the Roberts appointment, I may disagree with him on a lot of issues, but I can admit that he’s probably the smartest justice on the court. I’m not sure you can consider the Alito appointment an achievement after the embarrassment Bush suffered when he tried to appoint Harriet Miers to the bench.

Bush’s ninth achievement is apparently strengthening ties with East Asian democracies without upsetting China. I don’t have a criticism of that as long as it’s actually true.

The 10th achievement, described by Barnes as “a no-brainer,” is the surge. First of all, supporters of the surge, Barnes included, always mention how its successes are fragile and tenuous. How can you call that a great achievement? As helpful as it may be, I still call that “running out the clock” or “buying time.” And speaking of buying, when people are talking about “the surge,” are they referring to the increase of U.S. troops? Or are they talking about the increase of payments to Sunni militias to get them to stop firing at us and start firing at other Sunnis? This no-brainer confuses me.

Do I think Bush is the worst president of all time? No, and you’re an idiot if you think so. However, I’m equally sick of people comparing him to Harry Truman or Dwight Eisenhower and talking right now about how historians decades from now will appreciate what he did. I’d like to think that Truman and Eisenhower didn’t spend their final days in office ostracizing the media in press conferences and saying, “Just wait until years down the road—you’ll think I was the cat’s pajamas!” Well, at least I learned a new word: twaddle.