By switching to a weekly (and weekend) format, the big dailies can get their print version in the hands of readers who aren't online all day. 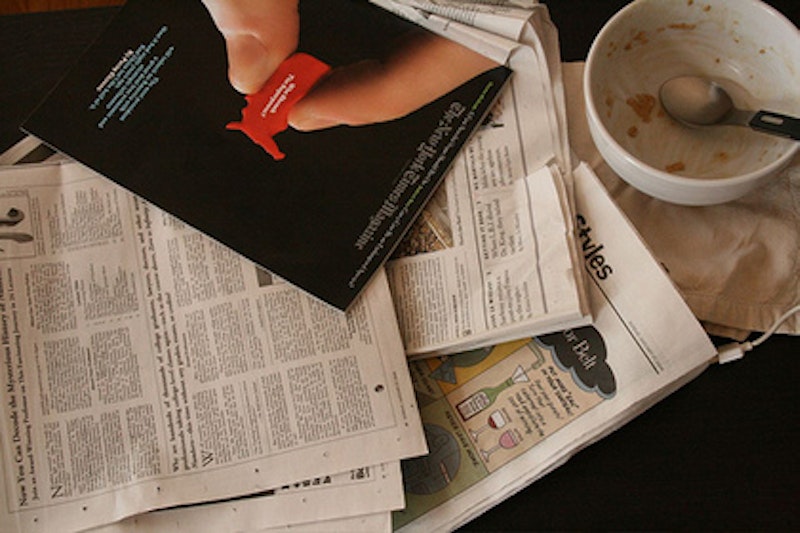 Not long ago I was on a three-hour domestic flight and, as most people of my generation do, loaded up on reading material to pass the time and drown out the carnival barkers who double as Southwest Airlines attendants. It struck me, mid-way through Tad Friend’s engaging “Letter From California” in the Jan. 19 New Yorker—a very lengthy examination of current marketing techniques in Hollywood—that, but for the short confinement in the air, this is a story I’d never have read otherwise.

No knock on Friend, but as opposed to just five years ago, my time spent with the print copy of The New Yorker is limited to “The Talk of the Town” and maybe a longer political or sports piece. I tried to guess how many people actually got around to this writer’s painstaking look at how movie executives think and make decisions; probably few and far between, since the length discourages Internet users and, like most magazines, The New Yorker now tends to end up in a pile of unread titles of all but the most single-minded devotees.

Upon reflection, I wonder if The New Yorker, indisputably one of the elite magazines on the market, would be better served on the financial front if it were delivered to subscribers on Saturdays instead of Mondays. (That’s in Manhattan, of course; those in the hinterlands receive their copies willy-nilly throughout the week.) Time tried this gambit a year or so ago, releasing on Fridays instead of Mondays, but let’s face it, the once-dominant newsweekly is almost completely irrelevant now—as is Newsweek—and, like its defunct sister publication Life, will probably cease to exist in print before the end of 2009, no matter what spin is put out. The New Yorker, on the other hand, remains a vital and utterly original magazine and might well benefit from this change of schedule, when its readers are relaxing on weekends and spend less time online.

One of the media-centric stories last month that caused a ridiculous amount of consternation among flat-earth journalists (or “print Creationists” if you prefer) was Michael Hirschorn’s Atlantic essay “End Times,” in which he suggested that The New York Times might go out of business in May. Hirschorn’s been around the block, is well-liked and respected in the schmoozy media bubble, but this heresy was perceived as out of bounds. It didn’t matter that he went on to say such an event was unlikely to take place so soon; just the idea got him into professional hot water, drawing overheated scorn from Portfolio’s Felix Salmon, The New Yorker’s James Surowiecki and Columbia Journalism Review’s Megan Garber, among others.

It was all a silly dust-up stirred up by professionals in the business who, not surprisingly, are in panic-mode. However, by my reckoning, the most intriguing thought offered by Hirschorn was tossed off in a parenthetical remark, as he considered the bridge between print and online publication. He wrote: “Most likely, the interim step for the Times and other newspapers will be to move to digital-only distribution (perhaps preserving the more profitable Sunday editions).” [Emphasis added.] Actually, Sunday-only print newspapers make a lot of sense for the same reasons I noted above about The New Yorker. Consider, for example, a fourth-tier daily like The Baltimore Sun, a once-prestigious newspaper that’s been kicked around in the past two decades—first by Times Mirror and then the Tribune Co.—so that it’s now a joke in its own city. Yet while the weekday editions of the Sun are tissue-thin, its Sunday paper is still fat with pre-print advertisements and loaded with editorial content.

The Sun’s hourglass is grains away from being empty, given owner Sam Zell’s difficulties and, unlike the Times, might actually shutter completely this summer, perhaps after a last-ditch experiment with free circulation or switching to a tabloid format. The Times, however—as well as The Washington Post and maybe a handful of other dailies—isn’t in quite the same dire straits and could conceivably stave off financial ruin by going the Sunday-only route. In effect, the Times would replace Time and Newsweek, larding its editorial pages with more and longer op-eds; adding in-depth sports articles, as well as keeping the inexplicably popular (at least to me) magazine, arts section, and the advertising-friendly style and shopping fluff. The paper’s Book Review is, by this point, largely ignored by all but a devoted coterie of cultists, but what the hell, management could keep that too as a sop to older readers. Oh, and yes, the first section would be reserved for what’s considered “news” by the editors, although those articles, too, would need more substance and a longer shelf life than what currently appears on the front page.

This plan is more than a band-aid and less than a permanent lifeline, for the inevitable death of all print, except in a reduced, niche-driven category, is upon us. Still, it would provide time, maybe a year or more, for the surviving dailies to figure out transformation plans, a project that, given the hubris of big media companies, was neglected 10 years ago. As you can see in this television spot from 2003, the Times sloughed off the Internet, letting a teenager speak about the paper’s coverage of the web.

The Times, if it went Sunday-only, might also forestall a hostile takeover by some canny entrepreneur who’d make a stock-price offer to shareholders that even the close-knit Sulzberger family, in control of the Times since 1896, would eventually accept. Carlos Slim Helu, the extraordinarily wealthy Mexican who’s now made two substantial investments in the Times Co., is seen by some as a relatively benign investor who’s simply adding to his share total because he believes the Times is a still a valuable property. Think again: Slim, unlike Zell, is no vanity white knight. He’s a telecommunications mogul in Mexico and much of Latin America and his interest in the Times is almost certainly not altruistic. He’s content to bide his time, and at the appropriate moment, swoop in, take over from the Sulzbergers, sell off its scrap parts and radically change the company to his own ends.

Sunday-only publication is, admittedly, a temporary fix, but for those who haven’t yet dressed for print media’s funeral it’s at least a respite.