Does Stewart v. Cramer represent the comedian’s greatest real-journalism coup yet, or just his growing self-seriousness? A conversation between Splice’s editors. 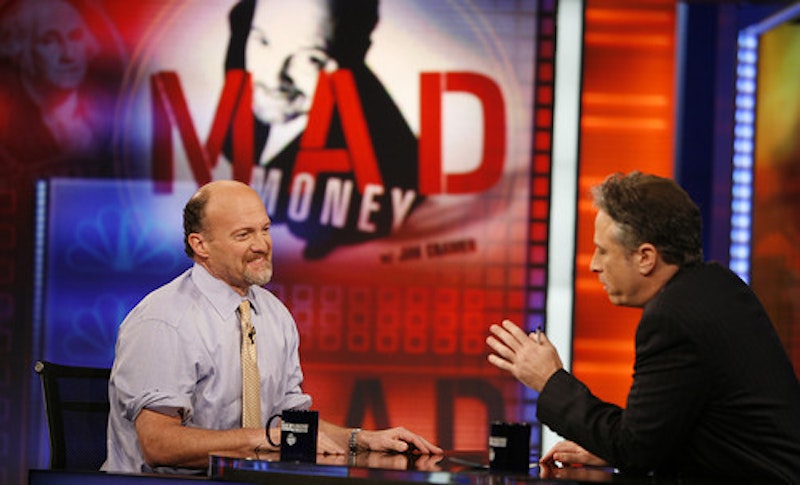 John Lingan:
We've been asked, both by the blogging chorus and the Daily Show host himself, to recognize Jon Stewart's recent interview with Jim Cramer as a legitimate cultural-political event, but I think this could conceivably be seen as Stewart's jumping-the-shark moment some time down the road. I'm a fan of Stewart and The Daily Show (even though I've sensed a certain growing frat-boyish broadness in the show's comedy over the last year or so), but he's reached a point of cultural saturation and influence that's making it harder and harder for me to accept his continued "We're just entertainers!" mantra whenever a debate gets heated. And with Cramer, I see him going after low-hanging fruit, on his extraordinarily comfortable home turf, and puffing out his chest a little too much given the circumstances.

Stewart's program is most purposeful and urgent when he's satirizing the media rather than politicians, so his hostility towards CNBC in light of recent economic events is a great move. But his focus on Cramer gives more credit to this stooge than seems appropriate. Here's a guy whose job is to bang gongs and scream into the camera while soothsaying about dividends and downturns; Cramer, too, is a mixture of entertainer and political commentator, only his network has chosen to work his image from the opposite angle as Stewart's. He's advertised ("In Cramer We Trust") as an oracle but people watch because he's a clown. But unlike Ta-Nehisi Coates, who ultimately indicted American viewers for indulging Cramer in the first place—asking, "Why is there a market for foolishness?"—I can't possibly think of Cramer's success as so individualistically pure. He's got a schtick, and his mondo-corporate overlords fund it and advertise it because that kind of thing sells.

And really, it sells because of ground paved by Stewart, who's got a much more creative, societally useful schtick, but who still makes his money by producing a pseudo-current events show and packing it with fun little bells and whistles that excite his core demographic(s). So his attack of Cramer seems disingenuous, particularly when he does it in front of his own fawning audience rather than on the road like when he taunted Tucker Carlson and Paul Begala on Crossfire. I simply can't give him credit (or accept the interview's tone of gravitas) for mocking a guy whose very appeal is his shock-jock buffoonery. Had Stewart done some kind of man-on-the-street comedic thing going after the goons at CNBC who deified and legitimized Cramer to boost ratings, then that might have been something. But Stewart's acting (and many media types have slavishly agreed) like this showdown is somehow bigger than one improbably influential TV personality getting in some easy licks on another.

Andrew Sargus Klein:
I can get on your “Stewart is jumping the shark” boat, though I’d equivocate and say that he’s overgrown his role—as in, he still has much more to offer the public at large—than taken a turn toward irrelevancy. But note the show in question’s opening segment, full of hey-look-at-this-“serious”-guy-arguing-with-this-“unserious”-guy humor: Stewart, if anything, is very much aware of the image you’ve described, John. He is an entertainer, and he knowingly retreats behind that title. But going over the unedited interview—with plenty of “fucks” coming from Stewart—there was, undeniably, anger in his voice and in his demeanor and in his composure. A deep, slow burning anger that speaks of a child’s empty college account, or a mother’s disappearing retirement fund—while a hero for the stoned collegiate and intellectual blogger set, Stewart tapped into that red-blooded American gene: populism.

And he did it well. And it can be said, I think, without apologizing for Stewart’s flirting with both sides of the entertainer-journalist divide, that something had to be said. At the least, a chunk of the public is aware of CNBC’s terrible record of commentary and analysis, or that Jim Cramer really is a windbag and should be treated as such. The mainstream news media, shamed after being sold the jerry-rigged sandcastle that is the Iraq War, now has a drinking buddy in the mainstream business media, which was just as startled as all the Joe Six-Packs out there. Cramer represents the most superficial fringe of the business media (and Stewart makes a point of not wanting Cramer to be the face of his criticism), but he is a part of it nonetheless.

I think of the interview as an anomaly; no, it’s not out of character for Stewart, but, just like Cramer, he’ll be back to business as usual. This whole affair will truly be a jump-the-shark moment if Stewart decides he must bring his truth to power every night in such a fashion so as to have it both ways: he can attack, as a smart satirical commentator, and not be attacked because he’s an entertainer.

John:
The combination of Stewart's mock-epic opening credits  ("Brawl Street: Get Ready to Buy Low and Sell Die") and stern populism is exactly my point. You’re right, Andrew, that it's pretty clear from the interview that Stewart's got real, audience-approved reasons for taking Cramer to task, but he preemptively defends himself from fatal (for a comedian) self-seriousness by pretending his interview's really no big deal; it's just some underwhelming story USA Today cooked up for its front page. And like I've said, this is disingenuous.

I guess where you and I disagree is the extent to which lambasting Jim Cramer represents "speaking truth to power." That takes bravery, whereas Stewart's interview required nothing of the sort. Were he to have Cramer's CNBC bosses on and grill them about the power they've given him, then he'd have, in my opinion, some small justification for his populist rancor. But Tucker Carlson is right: CNBC didn't cause this recession, and Cramer certainly didn't. Carlson also correctly calls Stewart a "sacred cow," which can be seen in the effusive reaction to his acknowledged ratings stunt. It's a completely no-risk decision to have a known windbag come on your show and foist blame upon him for a crisis he didn't create, and Cramer gets the assist for his Michael Steele-worthy tap dance of apology and shame.

But Carlson's an interesting example: his show got canned mere months after Stewart tore it to shreds, and CNN even admitted Stewart's criticism was a main cause. A victory for our new, 21st-century Edward R. Murrow, right? But no one could possibly say that any serious reform has happened in cable news—that the average volume of these screaming-match shows has decreased or the funding for them declined. Instead, CNN reacted to a public belittling and the uncool guy lost his job, while Stewart got hosannas for his criticism. Indeed, the man's media satire is worthwhile and necessary, but if he just keeps attacking these on-air personalities and winning out because his reach (particularly with young people, the advertising holy grail) is greater than theirs, then this strikes me less as taking on the establishment and more like a celebrity popularity contest.

Andrew:
One quibble. I wrote “his truth to power,” and I should have emphasized the “his”—meaning his own brand of faux-journalism.

But to look at your hypothetical for a moment: Do you actually think the CEOs of NBC would have gone on Stewart’s show? I very much doubt they’d even bother with a response. You correctly noted that Cramer and Stewart are close inverses of each other: the former is an entertainer sold as an expert, the other a smart journalist sold as an entertainer. With this interview, that parallel is pretty damningly exposed—and I really do think that’s the point, that Stewart could expose Cramer (who, let’s not forget, does receive a lot of traffic despite how buffoonish you and I have always thought he is) as being on the same level as Stewart, not vice versa.

No, network commentary hasn’t gotten any better since Stewart knocked those Crossfire fools around on live television. But I don’t see that episode or this current one as part of a zero-sum game. Stewart comes out on top—perhaps not a lot, but enough—because he was able to manipulate that divide between the commentator and the clown and score one for the network-hating, hack-loathing, somewhat-sensible public. It’s not an approach that can last forever, as we’re seeing in real time, but at least it’s doing something. Stewart’s foundational appeal is his satire, which, in order to be good, has grains of truth. This time around, though, the satire wasn’t in Stewart’s delivery, it was in the very premise of his show. The truth is still there.

Now, what would happen if this has been between Cramer and Steven Colbert?