A Left-Wing Blueblood Who Predicted the End of Obamamania

Lewis H. Lapham, the cranky and aristocratic former editor of Harper’s, was at an early juncture not impressed with the Obama cabinet. 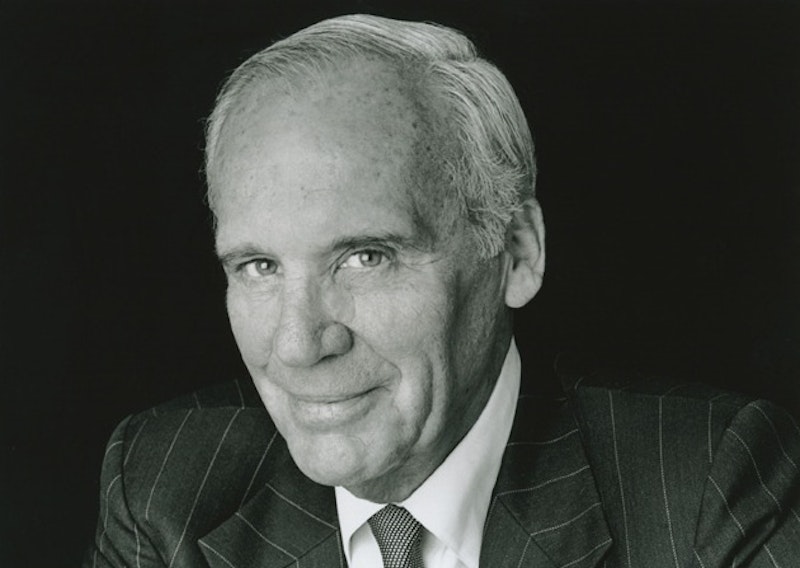 I recently came across Lewis Lapham’s “Notebook” column in the March Harper’s—still behind a firewall online except for subscribers—and was rather astounded not only by his prescience about the emerging Obama era but also his unapologetic stance that the United States ought to be governed by free-thinking aristocrats rather than another set of Washington/Manhattan/Cambridge insiders. In particular, he eviscerates the quasi-conservative David Brooks, who exulted last November 21 in The New York Times about Obama’s wise choice of “achievetrons” (all studded with Ivy League degrees) to staff his administration.

Brooks, who has since dialed way back on such lavish praise, took pains to poke fun at himself, although it’s doubtful he was sincere. “Already the culture of the Obama administration is coming into focus,” Brooks enthused. “Its members are twice as smart as the poor reporters who have to cover them, three times if you include the columnists.” Never mind, to repeat the old saw, that just as every U.S. senator looks into the mirror and sees a future president, there’s hardly a high-profile pundit who doesn’t do the same and see a Secretary of State or CIA chief.

As a rule, I find Lapham—editor of Harper’s from 1976-‘81 and then ’83-’06, before stepping down to a position as the magazine’s “Washington correspondent”—to be among the most malodorous, if largely unread, columnists in American journalism. He’s the embodiment of the noblesse oblige sage, a man who lectures about class inequality and the insanity of conservatives, even though he’s wealthy, well-pedigreed (Hotchkiss School, Yale) and hob-nobs at Manhattan cocktail parties with similarly well-appointed and self-aggrandizing titans of media, finance and academia. Lapham was thoroughly embarrassed in 2004 when his “Comment” column analyzed that year’s Republican National Convention, even though his essay appeared before the event actually happened.

Nevertheless, if it’s true that as a person recedes more deeply into the ranks of senior citizens—Lapham is 74—he or she feels more free to say what’s truly on their minds without fear of professional or personal repercussions, then it was refreshing to see Lapham completely dismiss the media’s cuddling up to Obama as he set up his domestic and foreign policy teams. He argues that for the past 60 years presidencies have been stocked with “achievetrons,” whether it was Robert McNamara, Henry Kissinger or Donald Rumsfeld, and most “[ended] their terms of office as objects of ridicule if not under the threat of criminal arrest.” Since Lapham likely wrote his “Comment” in January, he didn’t speculate whether Tim Geithner or Hillary Clinton would meet such a fate, but I suspect he’ll revisit the subject later this year.

The following passage, outrageously iconoclastic, especially for someone who sums up World War II as “the rising of the American nation-state from the ashes of Dresden and Hiroshima,” (as Lapham often refers to the pro-Israel lobby in the top echelons of government, perhaps the omission of Hitler and Stalin is unsurprising) must have unsettled both the goo-goos and opportunists who now lord over Washington, D.C.:

The courses of undergraduate instruction at our prestigious colleges and universities [do lesser schools even count, after all?] no longer encourage or reward the freedoms of mind likely to disturb the country’s social seating plan. During the early years of the twentieth century, before America fell afoul of the dream of empire, the students on the lawn of academe, most of them inheritors of wealth and social position, already were assured of their getting ahead in the world… If they strayed into the wilderness of politics, they did so in the manner of both Theodore and Franklin Roosevelt, with the enthusiasm of the amateur explorer.

Forget, for a moment, that both Roosevelts were consummate politicians, with no hesitation (like JFK) to rub shoulders with the ward heelers and corrupt office-holders of the time, and think just how remarkable this point of view really is. Down with the meritocrats, all hail those daring young men flying like Icarus to the sun on their silver spoons!

Lapham does praise Obama for his charisma, “efficient acquisition of money” proving him to be a “capable entrepreneur” and doesn’t doubt the President’s desire to “perform the labors of Hercules,” but simply has no faith at all in the men and women who surround him. He writes: “The redistributions of the society’s rich and poor require the hiring of domestic help willing to move the furniture. Achievetrons don’t do floors and windows.” Translation: Obama is doomed, not for a lack of good will or desire to re-cast society, but because he’s virtually powerless to overthrow the permanent government, the men and women who have a vested interest in maintaining the status quo. Democrats and Republicans, minus the few true ideologues, aren’t so different at all, Lapham implies—a push to the right, a push to the left, with not much change occurring—and so he’s left in a state of cranky, if well-nourished and well-connected, despondence.

Until reading Lapham’s “Comment,” which richly deserved a wider audience simply for its originality, I’d never have imagined wishing the man wrote more frequently—if not a daily blog, then perhaps weekly on this or that website. Anything for a respite from the likes of Andrew Sullivan, Eric Alterman and the entire Huffington Post. It’s certain, for example, that he’d have had great sport with the lead “Conventional Wisdom” item in the current Newsweek, the insipid column scribbled by the achievetrons he so detests. The arrow-up for Obama read: “Getting cuffed around a bit for multitasking, but isn’t that what we elected him to do?”

Lapham and this writer aren’t of the same minds politically, but saddled with the country’s economic collapse and panic, Obama’s “multitasking,” is, I think, something that the two of us would agree is a really, really dumb practice