How could Sanford have disappeared for five days so easily? He did it in the South. 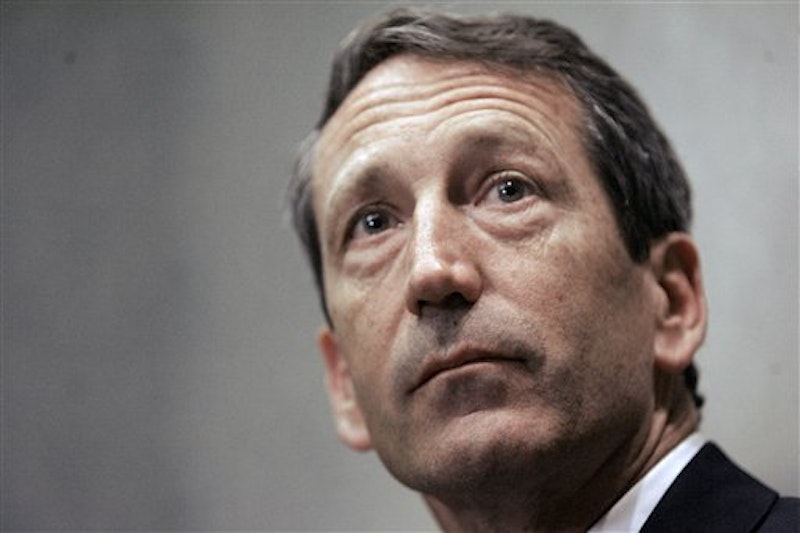 It’s far too easy to write about the South. Everything is broken and there are very few repairmen. It’s a place where they're still holding on to Confederate currency and all the best barbecue stands still fly the rebel flag. In short, it’s a writer's paradise, so far away from New York and the rest of the civilized world that it’s difficult to recall the existence of the other when you’re stationed in one.

Why don’t we write about the South more often? I’ll tell you. Like a photo of a beautiful sunset becomes just another snapshot when compared to all the rest, reports filed from below the Mason-Dixon line seem to wilt when held up to the opening coda of To Kill A Mockingbird, the poetry of James Dickey. After such history, such tradition, what’s the point of trying? New writers line up like tourists next to those Southern giants, ready to capture all the contradictory quirks without the any of the measured perspective it takes to both live in and write about this fucked-up place.

The kind of place that, earlier this week, turned the national gaze away from a philandering father with a plus-sized family to something more serious—politics. Well, the politics of philandering, anyway.

When I first heard the governor of my childhood state had gone missing, I was sitting on the cement floor of my family's fireworks store in Columbia, SC. How unlikely, I thought, to misplace the governor of a state. Amusing catastrophes call for amusing solutions, so I proposed the formation of an elite task force made entirely of governors to find and rescue Mark Sanford.

Leading the team would (obviously) be California’s Arnold, the only man strong enough in his convictions to coax ex-Gov. Jesse Ventura to out of retirement for one last mission. Also re-joining the ranks of Team: Governors would be Medical Officer Kathleen Sebelius. Michigan Gov. Jennifer Granholm would play the wheel-woman. Former Florida Gov. Jeb Bush would round out the team as an expert in logistics—and knives.

Our Team would track Gov. Sanford along the Appalachian Trail, only to find that he was held captive by angry ex-Governor and criminal mastermind Mitt Romney as a lure to unite all the governors in the fight against Washington.

As I saw it, sitting cross-legged on the concrete, pricing fireworks, it was a pretty funny idea. Kind of like Saturday Night Live’s “Ex-Presidents” cartoon series, only fewer people would get the joke. And, like most of my dumb jokes, I decided to forget about it.

Then yesterday happened, with the press conferences and the national attention and nothing was funny anymore. Mark Sanford is nothing if not an idealist. Here is a man who so despises any hint of socialism he turned down $700 million in government stimulus funding. What Sanford has done for the history of political philandering is no less monumental. No, Sanford wasn't funny anymore. I, for one, thought he was borderline heroic. This was something I had to see for myself.

They’re pouring new asphalt in the capital city, so when I drove the family truck down Assembly St, the roadway was a rough shawl, a reject from the long-closed mills downriver. The old truck took 10 minutes to summit Governor’s Hill, the square block where 12 or 13 families sit at the feet of the Governor’s Mansion. Southerners haven't forgotten their castes.

By now, I’m sure you know what amounts to the full story. Sanford allowed a “special friendship” with a woman who was not his wife to simmer for eight years across two continents. He flew to Buenos Aires, telling his staff he would be hiking the Appalachians. He spent those five days “crying in Argentina” to try and get resolution to the relationship with this woman.

And after at least five months of cover-up, after five days in absentia, during one of the most honest and sad and completely human press conferences I've ever seen, he didn't seem like he'd found any resolution at all. For all of his apologies, Sanford seemed to forget the most significant one; he was still in love.

As someone who is also currently in love, I completely and totally understand. How else could Sanford have booked a flight and stolen out from one America to another? What could he have been thinking—what was the best possible outcome of his trip? Did Sanford think he would be welcomed in South America with open arms, maybe elect him Governor of Argentina out of sheer goodwill?

No. He didn’t think that. He wasn’t thinking at all—he was in love. Like I said, I get that.

The better question is this: How did he get away with it for five days in the age of cell phone cameras and Twitter? I figured it out when I drove past the Governor’s Mansion to find—nothing. No TV crews, no press compound. There are no paparazzi in the South—no 24-hour news cycle constantly monitoring credit card transactions and tracking whereabouts of celebrity politicians. How did Sanford slip away to Argentina? I assume he just bought a ticket and left.

The two cop cars parked at the Mansion’s front gate sat empty. It seems that even the new Southern police gave up trying. What’s the point of crowd control when the reporters have all given up—it’s just far too easy.