The disgraced former governor begins his rehabilitation courtesy of an online publicity stunt. 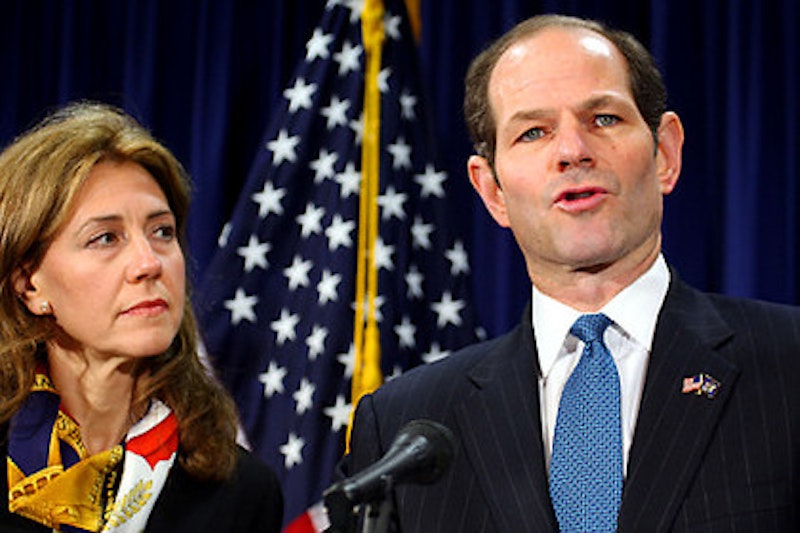 When Eliot Spitzer is brought up in polite conversation, political differences notwithstanding, the following words are likely to be said: tawdry, amoral, narcissist, hypocrite, angry, holier-than-thou and grand-stander. I wouldn’t use, at least on charitable days, any of the preceding to describe the successful website Slate, the online publication founded by the prescient Michael Kinsley (originally bankrolled by Microsoft and now owned by The Washington Post Co.) in 1996, which has to some degree replaced Time and Newsweek as a journal for left-center political punditry, arts criticism and outstanding sports writing.

Nevertheless, Slate’s appointment of Spitzer, the disgraced former governor and attorney general of New York, as its biweekly economic and government guru—charged with explaining to mere mortals how the United States can extract itself from the current economic crisis—does not inspire confidence that Slate, as it exerts increasing influence on a public that has forsaken print media, is reaching maturity with much grace.

Slate Group Editor-in-Chief Jacob Weisberg, who succeeded Kinsley in 2002 after a competition with the far superior writer and longtime libertarian Jack Shafer (now Slate’s media critic and editor-at-large), is a doctrinaire liberal and very much part of the incestuous East Coast circle of well-to-do journalists that operates under the now-quaint notion of noblesse oblige. Weisberg has an entrepreneurial side, as evidenced by his popular collection of “Bushisms,” a now-obvious novelty given the outgoing president’s extreme difficulty with the English language, but all credit to Weisberg for being first out of the gate to make some extra cash for himself and notoriety for Slate with the idea.

(Weisberg also co-authored a book with former Clinton Treasury Secretary Robert Rubin, In an Uncertain World, demonstrating that he’s well connected with the Democratic intelligentsia. Rubin, a director at the troubled Citigroup, of course, is how having his own problems, as Frank Rich pointed out on Dec. 7, since he apparently was either unaware or unconcerned about, as Rich writes, “the toxic mortgage-derivatives on Citi’s books until it was too late. The Citi may never sleep, but [Rubin] snored.” Perhaps Rubin will be Weisberg’s next columnist.)

Weisberg’s brief courtship of Spitzer (whom he’s known for years) to join the Slate roster smacks of a sensationalistic “get.” Weisberg told The New York Observer’s John Koblin last week, “It was not an epic negotiation. [Spitzer] was very receptive to the idea. I don’t portray this as something we had to coax him into.” Weisberg made no mention to the Observer of Spitzer’s resignation earlier this year as New York’s governor after it was discovered he was a regular client of prostitutes, although he did tell New York’s Daily News reporter Kenneth Lovett that Spitzer’s personal problems were not “relevant” to his Slate column.

I strongly disagree with Weisberg’s cavalier dismissal of Spitzer’s indiscretions. As I wrote earlier this year, as the scandal broke, it wasn’t the Governor’s dalliances with call girls that were outrageous—prostitution ought to be legal—but his extraordinary hypocrisy on the issue. The New York Times was as enthusiastic a champion of Spitzer as any institution, cheerfully dubbing him the “Sheriff of Wall Street” for his intimidation and bullying of financial executives, but as the “sordid spectacle” (the Times’ words) broke, that daily’s March 11 editorial was scathing in its condemnation of the self-described “steamroller.”

The Times editorialist wrote, “Mr. Spitzer’s own record of prosecuting [prostitution cases] gives him scant breathing room. As state attorney general, he prosecuted prostitution rings with enthusiasm—pointing out that they are often involved in human trafficking, drug trafficking and money laundering. In 2004 on Staten Island, Mr. Spitzer was vehement in his outrage over 16 people arrested in a high-end prostitution ring.”

No sensible person is in favor of “human” and “drug trafficking,” which is all the more reason to legalize and regulate prostitution, but I digress.

The question that Weisberg and Slate editor David Plotz failed to consider is how much credibility Spitzer has on any issue if he’d prosecute “johns” while indulging in the same behavior. There have been no known instances of financial improprieties in Spitzer’s past—and on the surface it seems unlikely since his wealth is inherited—but why would anyone believe what Spitzer writes? As a controversial “sheriff” he relished making enemies, and who’s to say that he won’t use his new forum to settle scores with both detractors and those he finds morally unfit?

Weisberg wasn’t unwise to hire an economics columnist, but instead of choosing someone untainted—say Bruce Bartlett, a former official in the Reagan/Bush the Elder administration who has been outspoken in his criticism of the current president’s economic policy—he went the splashy and undeniably cheesy route. As leader of the Slate Group, which includes new financial site The Big Money, it’s fair to wonder if Weisberg, with his embrace of the detestable Spitzer, has lost his marbles.