Proof That Blogs Are The Future

The New York State Senate’s website has incorporated bloggers and new media, resulting in one of the most impressive, and functional, government portals. 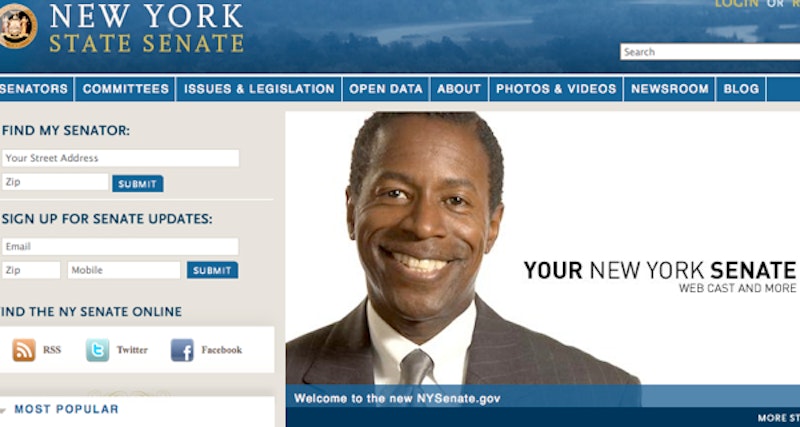 Leave it crusty media guru Nicholas Carr to dig up obscure quotes related to writing and journalism. Via Carr’s Rough Type, a doozy from French poet and bureaucrat Alphonse Marie Louis de Prat de Lamartine who, in an 1831 letter, had this to say:

Before this century shall run out, Journalism will be the whole press - the whole human thought. Through that prodigious multiplication which art has given to speech - multiplication to be multiplied a thousand-fold yet - mankind will write their book day by day, hour by hour, page by page. Thought will spread abroad in the world with the rapidity of light; instantly conceived, instantly written, instantly understood, at the extremities of earth, it will spread from pole to pole. Sudden, instant, burning with the fervor of soul which made it burst forth, it will be the reign of the human soul in all its plenitude. It will not have time to ripen, to accumulate into the form of a book - the book will arrive too late. The only book possible from today is a Newspaper.

It’s decidedly beautiful—no State of Play, here. The problem is that it’s painfully obvious Lamartine’s “rapidity of light” applies more to the boundless Big Bang of the Internet and the subsequent marginalization of newspapers than it does to the idyllic broadsheets it proselytizes. Carr writes:

The Newspaper arrives too late. The only Newspaper possible from today is a Text. A Tweet. Sudden, instant, burning with the fervor of soul which made it burst forth.

Dailies, alt-weeklies and glossies are falling around us, and unlike the current recession this fate has been predicted for a long, long time. As for what will happen when there are no more Baghdad bureaus around, many are skeptical online media can fill the gap. After all, much of what is disseminated online for free stems from dollar-backed reporting. Another popular pro-newspaper trope wonders who will go to the boring-as-hell city hall meeting on zoning restrictions. The answer hasn’t completely shown itself. But a good glimpse of it can be found in New York State Senate’s website.

If you’ve ever had to plow through any number of individual House member websites, you’d know they rarely resemble anything this side of 1999. And yet NYSenate.gov, a state legislature’s website, runs with a precision a presidential campaign would envy. To a designer, the site is trim, streamlined and professional. But its roots as a great site are found in the fact that established local bloggers, namely Albany Project’s Phillip Anderson, play a major role in the site’s administration. By opening up the site to diarists, the site offers grounds for discussion in a format not unfamiliar to Daily Kos. Profiled here on Daily Kos, The new site is a stark contrast to former status quo—one in which the assembly, when under Republican rule, denied Democrats access to its technology; now, every senator as a blog, as well as Facebook, Twitter and RSS links.

Couple the site with the state’s pledged drive for universal voter registration and there’s concrete evidence of how Web 2.0 technology is inexorably bettering our political culture.

Though the ever-evolving Whitehouse.org is breath of relief for anyone with a dial-up or better, the Obama administration has yet to fully back its campaign pledge to post all legislation online for public comment before Congress votes. Further, there is a considerable amount of red tape and cobwebs between the public and the efficient digitization of the federal government. But the New York State Senate’s Website is a bold signpost toward the future.

Journalists, your tears have meaning.

The city hall meetings on zoning restrictions will be podcasted, streamed and blogged on public dimes. Widgets and iPhone apps will pipe all this information straight to the voter. And as Big Government slowly, inexorably drags itself into digital relevance, the most casual news reader can summon anything he or she would want to know about the local city council, Supreme Court nomination or PTA meeting from essentially a single source.

Granted, the news media’s roles as judge, jury and executioner will still have their merits. After all, just because you can watch your local government live blog doesn’t mean you have any idea how to run the NY Fed. Big and complex ideas will still need to be distilled for the greater public.

New York now has a wonderful website at its disposal, but it’s going to take a lot of time and a lot of money to see this sort of product succeed on a national scale. When it does, the dust will have already settled on the current recession—as well as the final verdicts on which traditional media outlets are left standing. As all levels of digital government converge, the news media will take on—here’s hoping—a greater role as refined analysts. With facts so discernable, perhaps even the partisan puffery of Beck and Olbermann will deflate.

Just because vital public information is made easier to find doesn’t mean people are going to look for it. But the bar has been raised, and with each passing generation we will see the further dissemination of civic knowledge and a broadening of our political awareness.