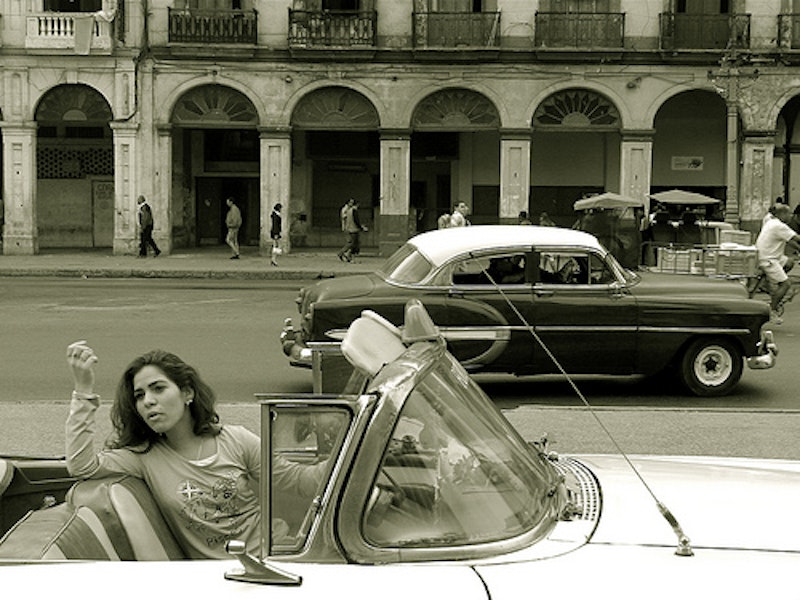 It’s clear that Barack Obama, amidst all the hoopla toasting him for the “historic” First 100 Days in office, is the master of turning a political sneeze into a public relations triumph. The most recent evidence of this ability, praised by acolytes as “canny,” was his quarter-measure of restoring relations with Cuba earlier this month, when he lifted musty restrictions imposed up Cuban-Americans who’d like to travel freely to the island and send money to relatives who still live under Fidel and Raul Castro’s tyrannical regime. This gesture by Obama, whose almost narcissistic desire to be admired by world leaders—ostensibly to reverse George W. Bush’s sometimes, but not always, unnecessarily adversarial stance against America’s detractors—doesn’t accomplish much unless he takes the politically gutsy action of lifting the Cuban embargo in its entirety.

Don’t hold your breath. Obama, despite the very high approval ratings (which aren’t abnormal for a president in his first term), is far too cautious to make such a bold move. (That lifting the antiquated embargo, imposed nearly half a century ago under entirely different geopolitical circumstances, is even considered “bold” simply underscores the steadfast foolishness of Obama’s predecessors, who were in hock to Florida’s electoral votes, as well as Cold War ideology.)

It’s unlikely that allies such as The New York Times’ editorial board will, after a month or so passes, hold him to the advice proffered that he go further than erasing travel restrictions for a tiny minority of Americans to travel freely to Cuba, for there will be too many current issues to debate long after Obama’s visit to Latin America is forgotten. The Times, on April 18, praised the President for his amiability and willingness to “take on the full plate of issues” that affect diplomacy between the United States and its southern neighbors, while also advocating lifting the embargo in its entirety. A Wall Street Journal editorial, published the day before, was less enthusiastic, even though it reiterated that daily’s long-standing opposition to the embargo. The writer said, “Embargo or not, Cuba will remain an island prison until its rulers are forced to ease their grip,” and then called for Brazil and other nearby countries to unite and demand that Cuba free its political prisoners and hold open elections.

As someone who often agrees with the Journal’s editorial views, I found this particular opinion unduly pessimistic. While it’s true that the Castros will take full advantage of any overtures by the White House, sooner rather than later their bullying won’t matter. Imagine if the embargo is finally declared obsolete: it doesn’t tax the imagination to foresee a wave of Americans visiting Cuba for the first time, spending their dollars freely, especially as U.S. commercial interests begin to invest in businesses on the island. This, in turn, I believe, would provide a huge incentive for the younger generation of Cubans, born after Fidel Castro first came to power, to coalesce and create a movement for free enterprise that the elderly dictators wouldn’t be able to stop with the usual propaganda and brutal curtailment of basic human rights.

So it’s a real mystery is why Obama, the purported catalyst for “change,” didn’t simply pull the trigger and put an end to the embargo. He’d let the world know, with trademark fanfare and uplifting rhetoric, that his administration would no longer be held captive to now-ancient policies and that America would, with or without the Castros’ cooperation, treat Cuba like any other country with which it has philosophical differences. China, of course, and Vietnam come to mind (and let’s throw in Saudi Arabia, Pakistan and Russia), countries that hold political prisoners but have embraced certain tenets of capitalism.

Yes, it’s certain that if Obama announced such an initiative—and it’s important enough for a prime-time television address to the nation—that conservatives such as Pat Buchanan, Rush Limbaugh and the usual lineup of Christian Right moral values arbiters would sputter and spew, but Obama owes them nothing, so that contingent is irrelevant. As for his own base, most would correctly applaud the idea and even those centrist Democrats and Independents still holding on to Cold War nostrums, might grouse at first, but once Obama presented the change as a fait accompli, they’d move on to any number of issues—healthcare, punishment of “greedy” financiers, etc.—that they’re far more invested in that opening up free trade with Cuba.

It’s a no-lose calculation for the President: he’d be hailed as decisive, deservedly, which would dispel many of the doubts that he’s overly cautious and can’t take action without subsequently backtracking, clarifying and seeking the succor of “consensus.” Personally, I’ve little faith in Obama’s enormous budget (and fully expect and hope that when it’s bruited about in Congress later this year the resulting legislation won’t resemble his initial plan) and his foreign policy, at least as outlined currently, makes me nervous. That said, if Obama does follow through on, for example, the pledge of substantial immigration reform, as well as a relatively small-bore action of ending the isolation of Cuba, it’d go a long way toward putting me (and the millions who share a similar uneasiness about him) in his rooting section.

Michael Kinsley was succinct in the conclusion to his Washington Post op-ed on the embargo question. He wrote: “We’ve already been enriched by the energies of Cubans who have arrived here since Castro’s revolution. So why do we continue to deny the Cubans still stuck on Castro’s Island the opportunities to enjoy the fruits of capitalism as well?”

It’s not my intention to oversimplify an issue, particularly one for which the president won’t received unanimous applause, but in light of the enormous domestic and international troubles he’s inherited (and created), this decision ought to be an easy one.