Obama is the Right Prescription for India

His curiosity and diplomatic style will renew our relationship with a great ally in Asia. 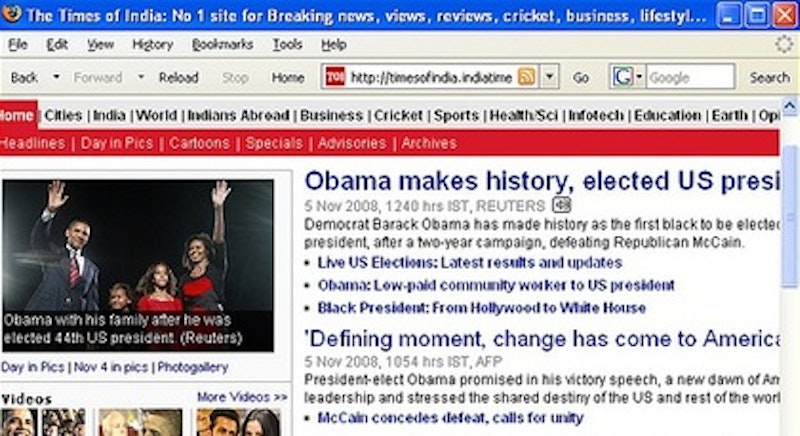 Screenshot from the Times of India's website by tifotter.

Barack Obama has broken barriers and fulfilled many dreams that many thought not possible. He brings something new, not just for the United States, but also to the rest of the world. Let me explore how President Obama is good news for India, South Asia and for the rest of the region.

First, Obama brings a breath of fresh air to the White House which has been occupied for too long by a president who has an approval rating of around 29 percent within the country and statistically insignificant internationally. Regardless of any change in foreign policy, just the fact that George W. Bush is replaced by a man named Barack Obama will bring a dramatic and positive change in good will for the United States. President Obama will also change the outlook of the United States in terms of foreign policy in such a way that it will recapture America's standing, authority and esteem in the world. He will restore Habeas Corpus, respect civil liberties, end torture by the United States and fight corruption so that once again, America will become the beacon of freedom and liberty that billions across the world admire.

As for India, it has enjoyed good relationship with the United States recently, starting with President Clinton. Many incidents in the recent history, most obviously 9/11, have aligned the interests of India and the United States and there is no better ally for the US in the fight on terror than India. After all, India has been fighting the war on terror for over half a century now. However, President Bush’s overly aggressive image has been a hindrance for the Indian government in building a consensus in the country in improving the ties with the US. An Obama presidency will change that. Also, he has clearly understood and articulated the fact that the Musharaff government had diverted the US aid for the war on terror to preparing for war against India. This is a remarkable point of view from a president.

However, his remarks about killing Bin Laden on Pakistani soil have been a concern for many of my friends who I have been talking to. To understand what he meant, one would have to understand the North-West Frontier Province (NWFP) and the Federally Administered Tribal Areas (FATA) of Pakistan. These are regions that are practically outside the control of the Pakistani government. Even the British tried but failed to bring about any level of serious governance in those regions that are ruled by certain tribes for centuries and where Osama bin Laden and many of the Al Qaeda top brass are believed to be living. In this context, what Obama said was that if the US government has actionable intelligence of bin Laden or high profile Al Qaeda terrorists to the effect that they are in sight at a location within the Pakistani border and if the Pakistani government is unable or unwilling to take action, he will. Clearly, this is not about attacking Pakistan.

Another area where an Obama presidency is favorable for South Asians is immigration reform. He calls for improving and streamlining the legal immigration process. He supports policies that remove incentives for illegal immigration by cracking down on employers who hire illegal immigrants and creates a system for employment eligibility verification. He also supports securing the border for a plan to bring the illegal immigrants out of the shadows by giving them a path to citizenship if they pay a fine, learn English, not commit any crime and go back in the line for citizenship. Another reform that he supports is in the H1B visa, which removes the dependency of employees to their employers for their right to stay in the country so that the rampant abuse of the employees is reduced.

One concern that many of my friends have raised is Obama’s stance on outsourcing. He calls for cutting tax breaks for companies that outsource jobs. While he mainly talks about the manufacturing jobs that are lost by the United States, it also applies to the offshoring in the fields of IT and IT enabled services. While these policies are aimed at protecting American jobs, he has also admitted that outsourcing to India and China is an irreversible process of globalization. All his policies ask for is a reduction in tax breaks from the US government to companies that send jobs overseas. I find that reasonable. It does not mean that he is going to ban outsourcing in any manner, not that any president could do such a thing.

A final word of caution aired by many is that his relative inexperience and unusually high expectations may lead to disappointment. However, with the kind of competent people like Warren Buffett that he’s surrounded himself with, I feel that the team that he’ll build will be capable enough to govern well and to change the way America is perceived in the world. For me, and many others who are numb from eight years of incessant politics of fear and propaganda, the very basic attitude change that he brings to the Oval Office will suffice for a while. For those of us who are disappointed that Bush’s much-promised compassionate conservative never materialized, Obama is a respite. If he turns out to be the president that he has promised to be—calm, collected, reflective, intelligent and smart—it will be change enough.