Obama Blinks at Defeat and is Puzzled

It's far too early to predict the President's success or failure, but as summer turns to fall, it's clear he needs to change strategy. 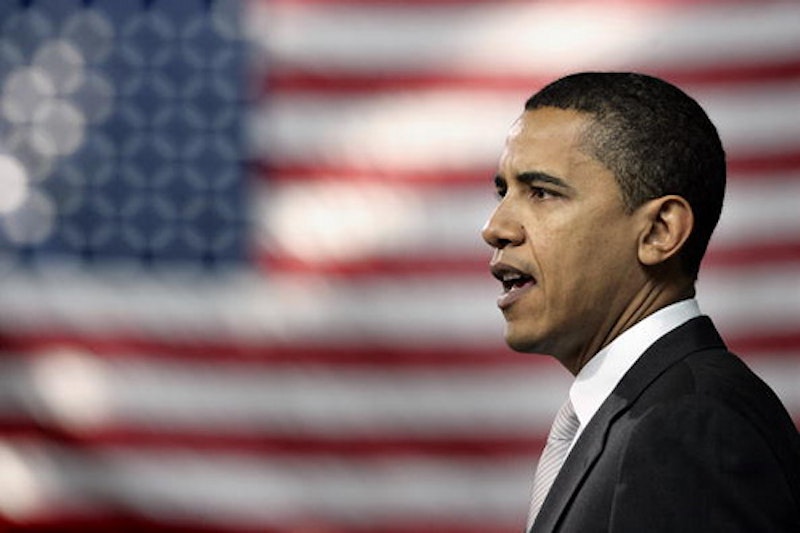 Give Maryland’s Sen. Ben Cardin, a traditionally liberal Democrat who hews to his party’s political agenda, some credit. Unlike many Democratic House members and Senators, who are ducking the skein of “town hall meetings” during this month of Congressional recess, Cardin, nothing if not dutiful, took his medicine Monday night at Towson University and weathered the protests of constituents at an overflowing crowd, most, according to The Baltimore Sun, which ran a front-page headline “Noisy Disbelief,” who were adamantly opposed to President Obama’s proposed health care plan. At one point, Cardin, in reaction to a sign—“Obama Lies, Seniors Die”—held by 51-year-old Anne Sutherland, who’s employed at an assisted living center and hardly an example of mainstream media characterizations of the current protesters as part of a undemocratic “mob,” was reduced to saying, “And by the way, President Obama is also a citizen of the United States.”

Cardin told The Sun’s reporters that he’d never witnessed “such interest” for a public meeting during the entirety of his career, which traces back to the 1970s.

What’s most perplexing to me, even more than Obama’s belief that he could successfully pass budget-busting health care legislation in the midst of an extraordinarily deep recession without a fight, is that the President has, until recently, taken such a passive role in the Congressional wrangling essential to the success of such an enormously expensive bill. Never mind all the noise in the media, from both the left and right wing partisans about the current uproar—which has demonstrated, by the way, that the much-ridiculed “tea parties” last spring were not an anomaly—since the real story is Obama himself.

Yes, it’s clear that the former, one-term senator from Illinois inherited a rash of immediate problems, with a cratering economy and two wars foremost among them. Still, if universal health care was his number one domestic priority, you have to wonder why the President wasn’t, back in March, twisting the arms, Chicago-style, of “Blue Dog” Democrats, either by veiled rewards or threats, to make sure that the House and Senate votes took place before the August recess. Leaving the messy details to Speaker Nancy Pelosi and Majority Leader Harry Reid (who’s up to his eyeballs in political difficulties back in Nevada) was a rookie’s mistake, one that you wouldn’t expect from a President whose chief of staff, Rahm Emanuel, has the reputation of a tough-as-toenails negotiator.

It’s possible this unwelcome legislative detour, and possible derailment of health care is just part of Obama’s learning curve—let’s remember that eight years ago, the mainstream media was clucking that George W. Bush was destined to be a one-term president—and that he’ll quickly shift gears. But the evidence so far doesn’t support that. Obama is, unequivocally, one of the most eloquent and charismatic men to hold the presidency, and his ability to sway citizens with his words and cool demeanor does recall the brief presidency of John F. Kennedy. However, it’s also quite apparent that, unlike Lyndon Johnson or Franklin Roosevelt, Obama doesn’t have the stomach to get into the political sewer of Washington and cut deals with both friends and foes for the greater good of his goals.

Obama’s dedication and work ethic is beyond reproach, yet anyone who has followed politics for at least a decade must be amazed that the man who mesmerized the country just a year ago, could be so aloof when it comes to his profession: politics, the ugly and very occasionally magnificent. Had Obama spent the spring in closed-door meetings with increasingly recalcitrant members of his own party—forget the GOP, he never had a shot with the likes of Mitch McConnell and John Boehner anyway—instead of, say, traveling abroad to assure the rest of the world that America was ready to once again assume the role of an understanding and empathetic global power, he may not be in this current fix. But it’s more and more evident that Obama is an academic president, above the fray, one who prefers to deliver soaring rhetorical speeches, believing that his message will go over the heads of the communications industry he so adroitly exploited in ’08, and win the confidence of “normal” Americans. Obama believes his innate intelligence and mellifluence will ultimately carry the day.

Look up the word “narcissist”  in a dictionary and you’ll find Bill Clinton as an example. In his own way, though, Obama, while not as flagrant as the Arkansan, is just as guilty of promiscuous self-regard.

In retrospect, this shouldn’t be such a surprise. For example, it’s inexplicable to me that Obama, after pledging to end the absurd and hopelessly anachronistic “don’t ask, don’t tell” policy in the military, didn’t take care of that on Jan. 21. Most Americans are in favor of scrapping the discriminatory dictum, and, had he delivered on that promise the only groups objecting, the noisome “moral values” crowd, were of no use to him anyway. Instead, he’s angered gay rights groups and liberal publications such as The New Republic, who are simply puzzled by the decision.

For now, the left’s criticism of Obama is carefully calibrated—since some acolytes, such as the bombastic Michael Moore told a Rolling Stone reporter that he’s still “pinching himself” that a man like Obama is actually president—and the words are, as the saying goes, written more “in sadness than anger,” but that won’t last forever. If, as it appears now, that whatever health care emerges from Congress this fall will be very watered-down, Obama will pay a price. And, as each week passes, his support among centrist Democrats will only diminish, for the midterm elections of 2010 are already under way and to a member of Congress if it’s a choice between keeping his or her job or taking a political bullet for Obama, there’s not much mystery as to what the decision will be.