Ukraine shows new media as herd-like as the old. 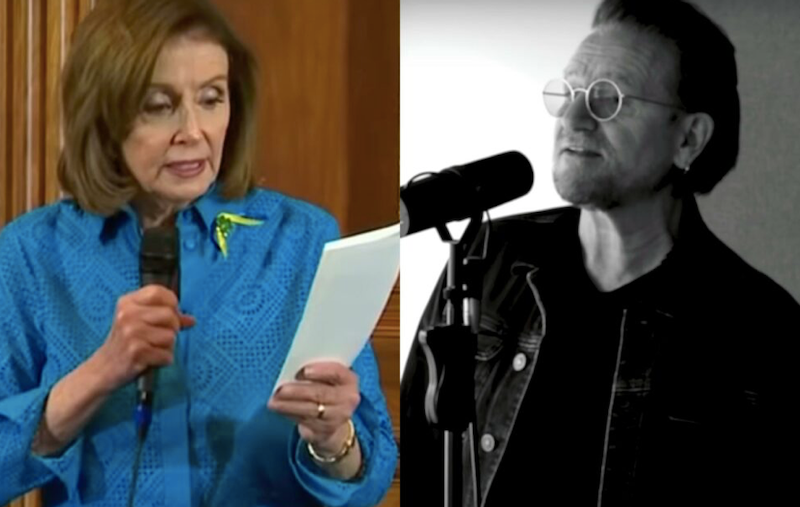 U2’s Bono supplying Speaker of the House Nancy Pelosi with a clunky limerick on St. Patrick’s Day about Russia-invaded Ukraine being like the new Ireland and Ukrainian president Zelensky the sainted new slayer of evil snakes may have been that rocker’s lowest ebb creatively (maybe the Edge was always the real genius in the band). But this is just one of thousands of embarrassing moments per day in the current war-frenzy. Maybe Putin deserves all this noise, but we don’t.

The unsettlingly homogeneous-sounding media war machine at work now is nothing new. Just over a century ago, the tyrannical President Woodrow Wilson helped create the Madison Avenue advertising and publicity industry as we know it in order to promote the U.S.’s dubious entry into the quagmire of World War I. To this day, from football stadia to search engines, the military-industrial complex and the bread-and-circuses-distribution systems remain entwined. When Biden announces, as he did this week, that it’s time for a “New World Order” to be led by the U.S., he’s not accidentally stumbling onto a loaded phrase (used by George H.W. Bush and others before him) while searching for a casual way to say “Everything will be free and peaceful now.”

After over 100 years of fascist-leaning corporate forces to the West clashing with brutal state socialism to the East, it turns out we’re still stuck in iteration after iteration of roughly the same fight, even if there are occasional, wonderful glimmers of an older, more libertarian liberal tendency through the smoking ruins. And as it was during World War I, the media are urging the whole ugly process along. Now those media include Big Tech social media platforms, which have not been at all shy about showing where they stand, whatever naïve dreams about their neutrality we all may have entertained upon their nerdy, fun, seemingly harmless, low-testosterone launches.

Look at just one example of conformism from each of six major tech platforms since the current Ukraine/Russia conflict began.

Facebook had for years banned the Ukrainian militia Azov Battalion from posting or being praised on Facebook because it is, well, violent and fascist. I wouldn’t be as quick to ban things as Facebook is if I were in charge, but I’m startled by the abrupt turnaround Facebook committed in unbanning Azov after Russia’s invasion. In a fashion highly reminiscent of World War II moral logic, the enemy of my enemy is apparently now an uncensored friend—or at least isn’t a fascist, and don’t you dare claim otherwise, deserter! Of course, if you’re the wrong kind of Trumper or nationalist, you can still get banned as a fascist on social media, but if you’re an actual fascist, apparently all that matters is that you stand ready to fight against Russia!

Almost simultaneously with that about-face, YouTube on March 8 suddenly decided to yank an Oliver Stone-hosted documentary about Ukraine and the West’s manipulations of the Russian-leaning factions there. YouTube said (after years of it being watched without a problem) the film was too violent. Last I knew, though, you can still find Ukraine on Fire on Rumble.

Twitter now has little choice but to admit that the story it censored about Ukraine-tied Hunter Biden and his sleaze-filled computer laptop was true. The New York Times has started saying so, so the jig is up. Naturally, this doesn’t mean such institutions will let information flow freely in the future, though, and Twitter has already moved on from blocking the New York Post’s account for saying the Biden laptop was real to censoring comedic Babylon Bee’s account for sarcastically calling transgender government official Rachel Levine “Man of the Year.” Can’t have dangerous humor or biological facts careening uncontrollably around cyberspace. But don’t worry a bit about them skewing war info. I’m sure they wouldn’t do that.

The search engine DuckDuckGo, which built its entire reputation on being the un-Google that wouldn’t censor results or weight hits in favor of the establishment’s preferred narrative, just chucked all that out the window in favor of saying it’ll downgrade sites associated with “Russian disinformation.” No need for you to sort things on your own, feeble-minded citizen.

Meanwhile, the White House briefs TikTok stars about the Ukraine situation, just to make sure the most “cutting-edge” thinkers are all on the same page. American politics and Chinese social media, partnering for a more propagandistic tomorrow. Maybe that’ll compensate for Putin and Beijing’s authoritarian, centralizing coziness lately.

Oh, and don’t be so sure you can fix the Biden propaganda situation by convincing people his election was illegitimate, if you rightly or wrongly swing that way: Vimeo just banned documentarian Jason Rink for life merely for posting private clips of interviews with election 2020 protestors he was planning to use in making a documentary on the topic. The little-viewed multiple clips constituted “repeat violations” of the Vimeo policy against election misinformation and had to go even before they turned into anything substantive. Be careful where you store your files (or money, etc.) these days.

I’m not suggesting you get off the grid and run straight into the arms of Putin, but the all-encompassing cyber-embrace of the “right side” does at some point chafe so much that one begins to sympathize with almost any manner of rebellion.