In which our penitent columnist argues in favor of slavery reparations. The government does this kind of thing all the time, right? And let's give some money to American Indians for good measure. 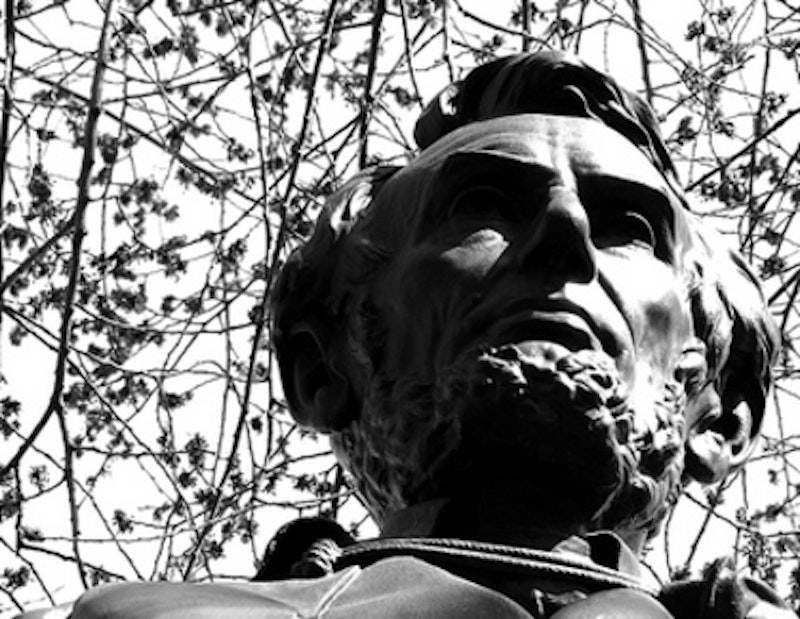 I apologize for shit all the time, OK? I mean, I fuck up all the time, so it's not like I'm exerting myself tremendously, begging forgiveness for my latest Atrocity. I mean, I've done Questionable Things all the way around, but lately it's this Mr. Wrong column I'm excusing myself for, because at this point if somebody says "you know, I read your column the other day . . ." I just jump right the fuck in there with "Wow, OK, I'm very sorry to hear that, sorry about that, I'm sorry" and it's not like I'm being sarcastic or anything either, I’m not busting out my set of "air quotes" for my "apology" about my crappy "column," which I never fucking ever asked anybody to read, ever, OK? I only ask to Get Paid for writing the fucking thing (whether for Splice Today or Baltimore’s City Paper). I have no Delusions about getting people to read the fucking column. I mean, I'm not gonna go out and say, "hey man, you should read my Mr. Wrong Column" because: Why?

Beats me, seriously, I don't know why anybody should read it, OK? I just write it, and then if I end up getting cornered, look, seriously, I don't wanna talk about it, I just wanna write the shit and cash checks. You read it? I want you to know I Apologize Profusely, Humbly, Abjectly, Truly, Madly, Deeply, Whateverthefuckyouwantly, I apologize my way outta that shit and let's all of us, as a Nation, move the fuck on to Sunnier Days and Good Times.

So I hear people every once in a while talking about The Government apologizing for Slavery in the United States of America, and I have been in favor of all that stuff; Official Government Apology, A Holiday, and most importantly some Reparations, hells to the fuck yeah, and for that I do not apologize, because This Is America and That's How We Do. We Buy Shit.

The 43rd President of The United States basically went and Apologized for the Economy by cutting millions of people checks, right? I mean he called 'em Economic Stimuluses, but we all know it was one of those deals where it was really a case of "OK, look, sorry, really, My Bad, etc., look, here's a coupla bucks, go out and buy yourself a nice meal and a toy for the kids maybe, and let's all of us, as a Nation, Get Over It And Move On, OK?

I don't know about you, but I'm certainly sorry there were Slaves. That's some nasty business, man, human beings bought and sold like animals, and that's not even getting anywhere near any of the sad details, which I fucking hope you learned about in school, and it's like this: I didn't have any Slaves but somebody has to step up and be Sorry about this shit, you know? And ultimately, what's the Big Problem with a big, cathartic closure-type action here? I'm sorry people owned Slaves, and I totally wish it never happened in the United States Of America The Beautiful, and let's see what we can do about stopping it anywhere we see it, OK?

But meanwhile, back in The Land of the Free and the Home of the Brave, historically, Slaves helped Build The Country all over the place. I'm not apologizing for Indentured Servitude because nobody's talking about that. If people were talking about how fucked up some shit is in this country because of Indentured Servants, I would look into it and Apologize and figure out some sorta Compensation Plan, but so far nothing's crossed my desk, and meanwhile the Natives here got Royally Screwed outta their land, and then they got jammed on treaties with The Government, and almost completely Exterminated, and they ended up with some Real Estate and as much action as they can generate off of Casinos. It's not like any kind of Fair Trade, but it's something. I dunno if anybody Apologized to the Natives in an Official Capacity, but if They didn't, then it wouldn't hurt to now, you know?

So look, we got a Black President in the pipeline (and I'm still taking all action on that happening, so if you see it another way, get your money up) and that'd be a good time to clear the air, so let's apologize and cut some checks, and don't tell me we're gonna bankrupt the fucking country, man, have you seen that National Debt thing? If you're a cheapskate, consider how uh, "inexpensive" the dollar is right now, for reals, and let's get an amount reflecting some sorta good-faith class-action lawsuit-type money, but no fucking lawyers get paid for this like they pigged out on the Cigarette Settlement, Jesus Christ. And let's go ahead and hand 'em out to all the descendants of former Slaves here, but don't ask me how that's gonna get proved or verified or whatever, because it sounds a wee bit too Nazi Germany. There was a mess of people who discovered their inner Native American DNA to get in on that Indian-Casino action, and the country's not busted out, so fine—if there's a buncha people trying to prove they got some, what, 400, 500-year-old African genes on and it's a pretty good bet somewhere along the line somebody was in shackles, then it's all good, because I think if we have lots of people claiming relatively recent African Heritage, it will kinda Unite us as a country. E pluribus unum, eh?