Certain Republicans are advocating that the party cede the Presidential election to Democrats and let them ruin things for a few years, but there's too much at stake for anyone to be throwing an election. 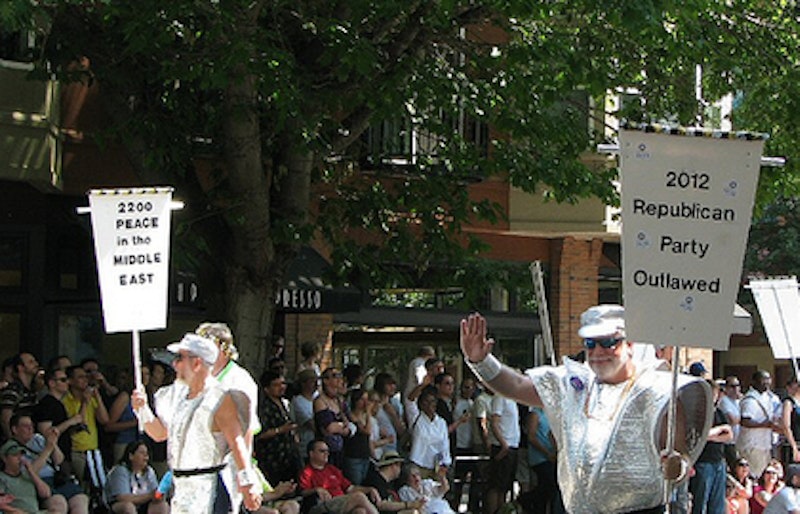 It’s a tough time for the Republican Party. GOP purists argue the party has lost its way, no longer adhering to the central tenets of “The Reagan Revolution,” particularly with regard to spending.  Republicans had simultaneous control of the House, the Senate and the presidency from 2002 until 2006, and yet most would agree that the party emerged from that opportunity with very little to show for it. Voters took notice and the 2006 midterm elections served as a comeuppance for Republicans, with Democrats winning both the House and Senate.

With such a bleak outlook, a controversial school of thought has emerged in certain Republican circles, proponents of which make the case that the GOP should essentially concede this election cycle to the Democrats, allowing them to assume power of the government’s executive and legislative branches. Then, the theory holds, the country could watch the Democrats make a mess of things, paving the way for a triumphant Republican resurgence in 2010 or 2012.  It’s a romantic idea, and one whose merits I can understand and even appreciate to a certain extent, but in the end, mark me down as one Republican vehemently opposed to this strategy.

Currently in the House of Representatives, Democrats hold a 236 to 199-seat majority, with all indications pointing to a November increase. The latest generic Congressional poll conducted by NBC News and The Wall Street Journal gives Democrats an edge over Republicans of 48.7- 37.3 percent. Republicans have hurt their prospects even more with a near-record number of retirements. At least 26 House Members have announced their intentions to quit this year, ceding the huge advantage of incumbency to the Democrats by creating open seats in a year in which voters do not hold the GOP in high regard.

The situation is no better in the Senate. While the Democratic edge in the Senate is much narrower (one seat), the implications of an increased majority in the Senate are far more significant. Should the Democrats manage to win 60 seats—unlikely at this point, but not impossible—the consequences are enormous because the Democrats’ edge would be “filibuster proof.” Such an advantage would be particularly important in several key areas. First and foremost, the agenda of a President Obama would essentially be fast-tracked without the threat of any real Republican challenge or ability to stop it.  Second, with no threat of a filibuster, Democrats would be able to quickly and easily push through any and all judicial nominations—including, of course, nominations for the Supreme Court.

For some Republicans and conservatives, this scenario has appeal, putting the onus on Democrats to satisfy the electorate. This strategy has some high profile backers: Rush Limbaugh and various writers and editors at The National Review, the preeminent conservative publication in the country. With the Democrats in complete control, Limbaugh has said, “the country would go to hell in a hand basket.” Once that happens, this theory continues, Americans would be forced to recognize the misguided, erroneous and foolish nature of the Democrats’ policies. The GOP, hitting a cathartic bottom, would have no choice but to return to its best conservative traditions and roots, emerging from its political penalty box as a stronger, more united, and more philosophically pure Republican party, ready to again earn the Americans’ confidence.

I’m also disappointed by President Bush and the Republicans. I further agree that the GOP has lost sight of many of its core principles—many of which attracted me to the party in the first place. And I concur that the party needs a wake-up call, but here is where I begin to diverge from Limbaugh and others. I’d argue that the pathetic state of the Republicans today should be sufficient in giving the party the slap across the face it clearly needs. And while I also believe that the Democrats would make a mess of things if given a mandate, I am not prepared to simply concede this election and let them wreak havoc purely for long-term political gains. The stakes are simply too high.

There are three major areas of concern that preclude my signing on to the concession theory. First, a President Obama, Speaker Nancy Pelosi and Majority Leader Harry Reid are going to raise taxes through the roof. At the very least, the top tax rate will go from 35 to 40 percent, the lowest tax rate from 10 to 15 percent, the capital gains tax rate from 15 to 20 percent, and the tax on dividends from 15 to 40 percent. The so-called “marriage penalty,” now non-existent for couples making less than $150,000 a year, would, under Obama’s proposed plan, be in full effect from the first dollar earned. Under the current law, parents receive a child tax credit of $1000 per child. Obama, Pelosi and Reid would reduce this to $500 per child. For those who have been exposed to the archaic Alternative Minimum Tax in recent years, under Democratic control the AMT will continue to exact its disproportionate toll on taxpayers’ wallets. At a time when the economy is retracting, the country cannot afford the massive tax increases that Democratic control would bring.

Second, I am not comfortable with the national security or foreign policy ramifications of the potential Democratic trifecta. Obama’s lack of experience is a major source of concern, and his stated willingness to meet with Iran and other rogue regimes as president with no preconditions raises concerns about his judgment in this area. Pelosi ushered the Democrats into the majority in 2006 with all sorts of reckless promises about Iraq. While she hasn’t delivered on them—much to the chagrin of the moveon.org wing of her party—with the willing pen of a President Obama and a compliant partner in Harry Reid, it’s not unrealistic to think she would return to her dangerously dovish plans.

Then, there’s the issue of the Judiciary. With four Supreme Court Justices over the age of 70, the next president will almost certainly have the opportunity to appoint at least two people to the Court, and perhaps more. While the Supreme Court currently consists of more Justices appointed by Republican presidents than by Democratic ones, the ideological makeup of the Court is, in reality, rather balanced. Justices Roberts, Scalia, Thomas and Alito are considered reliably conservative; Justices Stevens, Souter, Ginsberg and Breyer are reliably liberal; and Justice Kennedy is the swing vote. If Republicans concede this year and allow a President Obama to appoint judicial nominees of all levels without a realistic check on that power, the long-term consequences could be dire. Democrats in the Senate did an extremely effective job of reining in President Bush’s judicial nominees through the use of (or threat of) the filibuster. If the Democrats attain a filibuster-proof majority, the GOP will have no ability to influence the makeup of the judiciary. The far-reaching powers of the judiciary are too consequential for the GOP to wave the white flag in November.

Frankly, in many respects the GOP deserves to be in its current position. I can’t say with sincerity that I’m really enthusiastic about McCain in particular, or about Congressional Republicans in general. It may be that when I go to the voting booth in November and pull the lever for McCain and other GOP candidates, I’ll be doing so more to voice my opposition to unrestrained Democratic control than to express support for my party’s candidates. But whatever my motivation, I can assure you that I will be voting for McCain, and I encourage fellow Republicans to do the same. There are different theories on how to extricate the Republican party from its current predicament, but conceding an election to the Democrats and thereby handing them the keys to the entire federal government, is not the answer: the stakes are too high.