David Paterson could do himself a favor by tapping Cuomo, the admired Democratic elder statesman, as an interim replacement for Hillary Clinton. 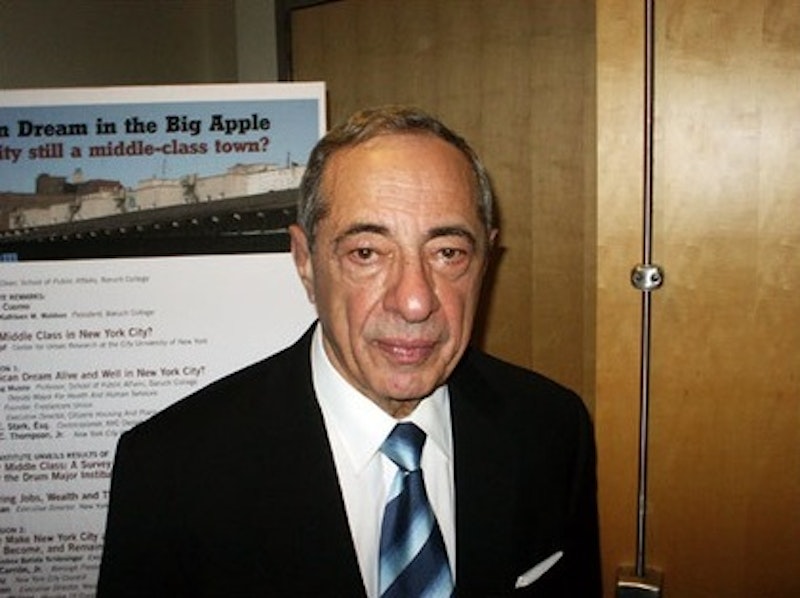 New York’s Gov. David Paterson is in a political pickle and no one would fault the man if he were popping Ambiens to get a decent night’s sleep. Paterson, who replaced hooker-obsessed Eliot Spitzer last year when the latter resigned, will be running for governor in his own right in 2010 and surely doesn’t need the distraction of appointing Clinton’s successor. The rather unseemly “campaign” for Paterson’s nod by about a dozen New Yorkers, with Caroline Kennedy receiving the most attention (pro and con), could be ended immediately if the Governor let common sense be his guide.

As a citizen—born and raised on Long Island—who rarely supports Democrats, I’m fairly objective about Paterson’s conundrum, and my unsolicited advice is this: tap former Gov. Mario Cuomo as a placeholder in the Senate and let all the people currently sucking up to Paterson duke it out in the special election that’ll be held in 2010. Such a decision would receive nearly unanimous acclaim, not only from the media and the Democratic party, but conscientious New Yorkers as well, who instinctively dislike the idea of someone receiving the gift of a U.S. Senate seat without facing the rigors of an election.

Cuomo, now 76, is an elder statesman of the Democratic Party, revered for his keynote speech at the 1984 convention, an impassioned burst of liberal rhetoric that overshadowed Walter Mondale, the sacrificial lamb who lost in a landslide to Ronald Reagan. Yes, he annoyed party officials with his legendary “Hamlet on the Hudson” routine, teasing the faithful with his hints of running for president in ’88 and ’92, but Cuomo, the three-time New York governor has made few public enemies, and in a body that includes geriatrics such as Robert Byrd and Frank Lautenberg he’d fit in just fine. In fact, Cuomo would likely make the most of this career-capping honor, supporting Obama on the Senate floor with his magnificent oratory, providing more firepower and credibility for the new president than any of the people—including his son Andrew, New York’s ambitious Attorney General—who Paterson is considering. The elder Cuomo has given no indications that he’s interested in filling Clinton’s spot, but it’s fairly inconceivable that he’d reject such a request from Paterson, especially since his tenure would be less than two years.

Some may argue that this scenario presents a conflict of interest, since Cuomo obviously will support his son in 2010, but compared to the Kennedy machine that’s small potatoes. Caroline Kennedy—and by the way, when did she drop the surname of her longtime husband Edwin Schlossberg?—has arrogantly said that she won’t run in the special election if not appointed by Paterson, which ought to tip off Democrats that she believes the seat, held by her uncle Bobby Kennedy for four years in the 60s, is, by accident of birth, hers for the taking. In contrast, Andrew Cuomo (divorced from one of RFK’s daughters in 2003) has no fear of facing voters and an election pitting him against Republican Rep. Pete King would be a dandy.

Kennedy has disappointed supporters by giving interviews that reveal her extemporaneous speaking skills are on a par with those of President Bush (or her uncle Teddy Kennedy), and has also refused to give any details about her finances, which is another minus on her ledger of qualifications for the Senate. If indeed Kennedy, now 51, is intent on entering the family business, her debut has been underwhelming. It’s all rather mystifying, for if Kennedy, who by all accounts is a bright woman, did compete in the 2010 election and was victorious, it’s conceivable that should Obama serve two terms she’d be a leading contender for the 2016 Democratic nomination, and possibly become this country’s first female president.

Ben McGrath, the excellent New Yorker staff writer, wrote about Kennedy’s flailing candidacy (focusing on her abundance of “you knows” in interviews) in the weekly’s Jan. 12 issue and one passage caught my attention: “On the one hand, [Kennedy’s] lack of polish, or media training, suggests an Everywoman appeal—the mother of three with no Washington experience, like a Sarah Palin [zing!] for Democrats—while at the same time undermining the Kennedy mystique and serving as a reminder of the Bush lesson that dynasties can devolve (and not just into mangled English).”

A couple of points. Caroline Kennedy as an “everywoman,” given her vast wealth, access to power and political pedigree, doesn’t add up. Say what you will about Palin (and frankly, I wish she’d dry up and retreat into Alaskan obscurity) but you can’t brand her as a scion of a political dynasty. As for the “Kennedy mystique” that McGrath mentions, perhaps I’m in a minority, but that aura eludes me. Yes, as a young teenager in 1968, despite supporting Gene McCarthy, I admired many aspects of Bobby Kennedy’s short and tragic campaign for the presidency, but in the succeeding decades as the sordid details of the Kennedy clan appeared nearly every year, and not just in tabloids, it was apparent that this was a fairly grubby “dynasty.”

The New York Times has been restrained about the Caroline Kennedy candidacy in its editorial pages (although I’m betting that publisher Arthur Sulzberger Jr. is in her corner, it ought to be remembered that his predecessors, in 1964, endorsed incumbent Republican Kenneth Keating over RFK in that Senate election), praising her early support for Obama, as well as her “charm” and “quiet but distinguished role in politics,” but also questioning whether her lack of legislative skills would hinder her ability to bring federal dollars to New York.

Elsewhere in the Times, Nicholas Confessore and Jeremy W. Peters (Dec. 31), in a “news” article, came up with this whopper: “But Ms. Kennedy’s own political style seems to have more in common with that of Daniel Patrick Moynihan, who once held Mrs. Clinton’s seat: cerebral, restrained, dry.” How absurd: Moynihan, who unquestionably lapped Kennedy in eloquence, was indeed “cerebral” but hardly restrained, as Bill Clinton found out when he expediently passed a welfare reform act in advance of his ’96 reelection. And op-ed columnist Maureen Dowd, for better or worse, gave her own endorsement to Kennedy on Jan. 7, saying, “Congress, which abdicated its oversight role as the Bush crew wrecked the globe and the economy, desperately needs fresh faces and new perspectives, an infusion of class, intelligence and guts.”

Dowd’s hyperbole notwithstanding—although the continuing economic crisis occurred on Bush’s watch, it’s not as if Bill Clinton and his Treasury Secretary Robert Rubin, as well as Alan Greenspan, are without blame—I wonder again that if Caroline Kennedy has such “guts,” why won’t she demonstrate that by running for Senate in 2010?

This is why David Paterson ought to end the short but intense campaign for Clinton’s seat and appoint a respected and non-controversial figure to represent New Yorkers for the next two years. No one is better qualified for this position than Mario Cuomo.