In her first national interview, Sarah Palin didn’t embarrass herself… unless you actually listened to what she said. 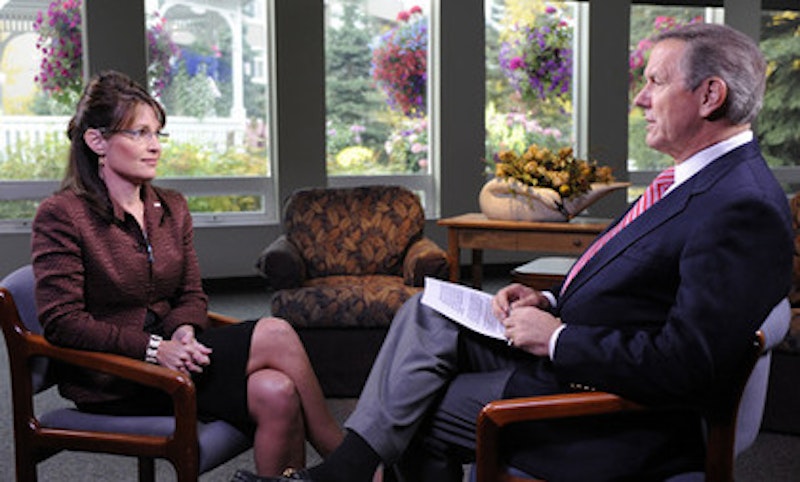 It was pretty sad to see the American public get so excited that the Republican nominee for Vice President was simply doing an interview. The Republicans’ distrust of the media is reaching new, horrifying levels, but that’s for another article.

Now, it was only one interview, but Gov. Palin has been in politics for a little while now, so it’s certainly not the first time she has sat in front of a camera and been asked questions. However, after watching the various segments of the interview (thanks, ABC, for breaking it up into parts—that really fucks up my YouTube viewing), I think a coworker of mine put it best when he said, “Her answers reminded me of when I was in school and hadn’t done the reading, but the professor was calling on me. I would just try to run out the clock.”

Alright, for just one second, let’s forget about the potential that she could become President of the United States of America, and instead think about the basic role of the Vice President—can you seriously watch that interview and tell me that she will help President John McCain govern the country in any way? When Russia decides to invade another former member of the Soviet Union (keep your eyes peeled, Estonia), what sort of guidance does Palin give war hero and veteran politician McCain? “John, I stood on the shores of Alaska and used the binoculars like you said, but I didn’t see anything.” I mean, shit, before the interview even began, it was well reported that she was receiving a crash course in foreign policy from people like Joe Lieberman. Amazingly, this didn’t seem to faze anyone, even though receiving a crash course in foreign policy is proof positive that you need a crash course in foreign policy.

But one can make the argument that she doesn’t need to help McCain in the realm of foreign policy, rather she will advise him on other issues. I reply with this question: like what? Forgetting foreign policy, arguably the bigger issue in this election is the economy. While it’s true that Palin has had to deal with managing a state budget, McCain has spent 25 years in Congress voting on the federal budget every year. Are her insights that much greater than his? Recently, Palin said in a speech that Freddie Mac and Fannie Mae had gotten “too big and too expensive to the taxpayers.”  I’m not trying to sound condescending, but Fannie Mae and Freddie Mac were private companies that are just now being bailed out by the taxpayers. I ask again, what sort of guidance is she going to provide to President McCain on these issues?

You might think that I’m talking about the E-word that has permeated every nook and cranny of this campaign. “Ebony”? No, but close. “Experience.” Over the past year and a half, the word has been tossed around more than I can even make a clever metaphor about it being tossed around a lot. And to all you cynics out there who say that Barack Obama doesn’t have the experience to be President, I have just one thing to say to you:  You might be right. [Say whaaaaa? Isn’t it clear he supports Obama? OH SHNAP!] But I would follow that up by saying that I’m not voting for him because of his experience; I’m voting for him because of his policy proposals and because of the poise and judgment I’ve seen him display throughout this never-ending campaign. The experience debate has become ingrained in the very fabric of this election so unfortunately it will be with us until election day, but I wish Obama supporters would stop trying to win this argument because (1) it’s unwinnable and (2) it’s a fruitless argument anyway.

What do we really know about McCain’s experience? We know that he’s been in Congress for a long time, voted on a lot of legislation and sat on a lot of committees (and I don’t mean that flippantly, I’m just attempting to summarize). Unless you followed him around all those years, you don’t really know what his experience says about his judgment and poise. Experience is such a nebulous concept. When a true crisis hits, there’s never a precedent or a protocol for it—that’s what makes it a crisis. A president doesn’t go, “Hmm, when I was a Massachusetts Senator, what were the decisions I made the last time the Soviet Union put nuclear missiles on Cuba?” or “Hey, Karl, remember when I was Governor of Texas and we were throwing around proposals for what to do if terrorists started flying commercial jets into buildings?” And now, the idea of experience in this election has been blurred even more by Palin’s entrance and the notion that she has the right type of experience while Obama has the wrong type.

But it doesn’t matter how Palin appeared to me in her first vice presidential interview—the spin inevitably goes on. Charles Krauthammer wrote an article in which he stated that Gibson didn’t stump Palin when she seemed unsure about the definition of “the Bush Doctrine.” Thank you, Charles, for finally getting to the heart of this presidential race: Charlie Gibson’s knowledge of foreign policy. Krauthammer reasoned that it was an unfair question because there are multiple definitions of the Bush Doctrine, and Palin didn’t know which one to choose—they’re like Pokemon; you gotta catch ‘em all! Never mind, of course, that anticipatory self-defense was a hugely significant policy shift established by President Bush, or that Gibson actually clarified for Palin, “the Bush Doctrine, enunciated in September 2002 before the Iraq War.”

Similarly defensive was Martin Sieff (who? exactly), who wrote an article entitled “ABC’s Gibson Grilled Palin Hard, But It May Backfire,” which described Gibson as “out for blood” and “out to embarrass Palin,” which sounds kind of like a… oh shit, what’s the phrase?... oh that’s right—kind of like a respectable journalist would question someone who has a good chance of becoming the second most important person in the country. Sieff also stated, “Gibson tried to embarrass Palin by referring to her Christian faith in asking people to pray for U.S. soldiers in Iraq. Palin countered by pointing out she was following the precedent set by Abraham Lincoln.” Now, if you watched the interview, regardless of your political leanings, I hope you can acknowledge that this statement is almost proudly ignorant of what actually happened. Gibson was questioning Palin about her quotation that the soldiers in Iraq were being sent “on a task from God.” At first, the Governor said that she wasn’t sure if those were her exact words (come on, Sarah, you know that YouTube exists, right?), and then she proceeded to say that she was paraphrasing Abraham Lincoln when he suggested that we never truly know God’s plan.

This was a curious answer because, first of all, it is the exact opposite of her quotation, which says definitively that the mission of our soldiers comes from God. Secondly, while I’m not a historian, I was curious to figure out which Lincoln speech she was recalling. A quick Google search suggests that it might have been Lincoln’s second inaugural address, in which he does talk about God having his own plan that is unknown to mortal man. It’s ironic, however, when compared to the context of Palin’s invocation of God, that Lincoln also states that in war both sides seek the assistance of God, but “[t]hat the prayers of both could not be answered” and “[t]hat neither has been answered fully.” But I digress.