Rep. Paul Ryan's budget plan is a great opportunity for the Democratic Party—that is, unless all it offers in response is same-old hackery. [updated] 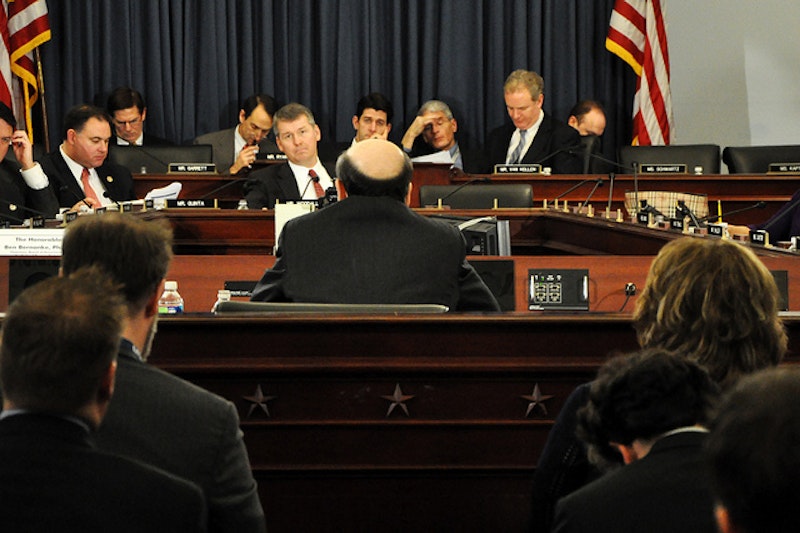 Finally, Congressional Republicans have offered the American public something akin to a working document that purports to solve our long-term debt crisis. It’s been over five months since the Tea Party—and unemployment-fueled midterms exploded in the Democrats’ face; since then, though, the Right’s new majorities in Congress and statehouses are interested in redefining rape, defunding Planned Parenthood and NPR, twisting over backwards to find some coherent legislative/judicial/rhetorical answer to the Patient Care and American Recovery Act, and many other small-potatoes, culture-war chest thumps.

And when I say, “Congressional Republicans have offered the American public something akin to a working document that purports to solve our long-term debt crisis,” I pretty much mean Rep. Paul Ryan of Wisconsin, the Mothership Wonk for mainstream Republicans and the author of a tax reform plan that tackles some six trillion dollars over the next few decades.

Here’s the thing: Ryan’s plan is the most comprehensive realization of the Right’s small-government, anti-raising-taxes (ever), cut-people-loose-from-the-dole philosophy. The vast cuts in Medicare (which gets privatized) and Medicaid are used to pay for a huge tax cut for those in the highest tax brackets. The overall cuts are massive and far-reaching. The overall plan is a Valhalla of Republican social and fiscal priorities—unsurprisingly, it accomplishes all this without touching defense spending. Good for Ryan for putting it out there.

Establishment Democrats are using the plan for the easy political points it offers, despite the somewhat calmer response from President Obama. Enough of this shit. It’s time for the Democratic Party—and the country as a whole—to tackle this situation head on. It’s time to redefine the debate not by black-and-white tax cuts, but as a broader move forward to stability. The Democratic Party’s strength lies in its protection of a social safety net that keeps millions of Americans out of poverty; these same programs, for a vast variety of reasons, are not sustainable in their current form.

As we saw in the debate over health care reform—which produced a bill that was, by orders of magnitude, more fiscally balanced than any bill of comparable size from the Bush Administration—and with the midterms, Republicans have been momentarily lurched rightward with the now-swan-diving Tea Party. The overall backlash isn’t foreign to anyone: unemployment is too high (drops only seem to coincide with more people stopping the job-search entirely); our foreign policy is a sprawling swamp where money disappears; and the economy as a whole is still sputtering.

If the GOP gets behind his proposals in a serious way, it will become for the first time in modern memory an intellectually serious party—one with a coherent vision to match its rhetoric of limited government. Democrats are within their rights to point out the negative effects of Ryan's proposed cuts on future retirees, working families, and the poor. He was not specific about many of his cuts, and Democrats have a political opportunity in filling in the blanks. But the ball is now in their court, and it will be hard to take them seriously if they don't respond with their own alternative path to debt reduction and long-term solvency.

The President just launched his reelection campaign; I’m comforted, slightly, by the fact that he hasn’t smacked the Ryan plan around—though ask me about his politics after Friday, when we’ve either avoided a government shutdown or thrown yet another hurdle in front of our haggard recovery. Defending the social safety net is in the center of the Democratic Party’s wheelhouse; there’s a long game to be played, here. There are ways to scale down astronomical entitlement spending without cutting food stamps and Pell Grants; there are tax reforms that are progressive without soaking the rich.

But shit like this, from incoming DNC chair Wasserman Schultz, needs to stop:

Seniors would pay more and more each year for their health insurance,” Wasserman Schultz said. “No longer would Medicare be a guarantee of health insurance coverage. Instead Medicare would become little more than a discount card. This plan would literally be a death trap for seniors.

It’s time for the Democratic Party to suck it up and counter Ryan’s plan not with talking points—no, take him at his word, and counter with policy that speaks to the present issues of the day (and the issues of decades from now). Andrew Sullivan, who's now at The Daily Beast, has been all over the Democratic Party’s hack politics over the Ryan plan. He offers a hypothetical liberal response here—the rhetorical linchpin being: “But if you are so concerned about deficit control that you are willing to endorse the Ryan plan, despite it being blatantly and ruthlessly built on the backs of the poor, then will you really argue with my plan, built on the backs of the wealthy?”

Liberal I am, I don’t think Sullivan’s hypothetical counter-argument is going to save the day. What I hope we’ll see is some sort of middle ground between the two. But as it stands, a conservative blogger (which a media reach to rival most mainstream politicians) has just posted the most honest rebuttal to the Ryan plan I’ve yet sceene.

Ryan’s plan is deeply flawed; it’s backed by research from the American Enterprise Institute that has since been corrected and amended (this, less than a week after Ryan unfurled the thing). It also utilizes Medicare cuts that Republicans vehemently opposed when they were presented as part of health care reform. But it’s a flawed plan that addresses the country’s most fundamental problems with a seriousness rarely seen with policy this far-reaching.

The voting public, generally, wants to see a compromise; the Republican Party, held hostage by rabid wingers, isn’t going to compromise; but if the Democratic Party—the party of compromise—refuses to treat the Ryan plan with anything other than rote hackery, then everyone loses, government shutdown or no.

[Update: the Progressive Causus in the House has drafted a response budget.]