Let's Not Be Frank 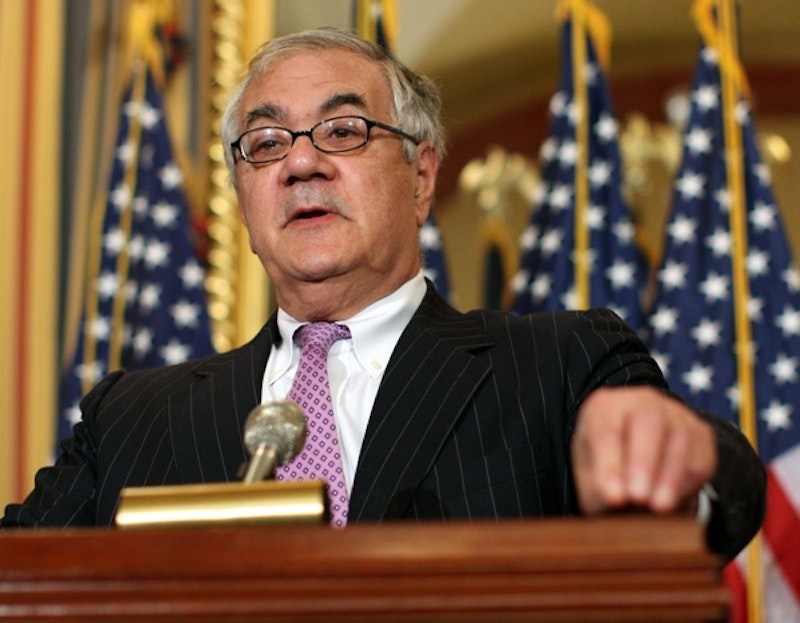 Republicans are professing shock over the 2003 sweetheart deal Connecticut Senator Chris Dodd received on financing for two of his homes from Countrywide Financial, a defunct mortgage firm that did its small part to help wreck the world economy. Dodd then sat on and now chairs the Senate Banking Committee, which oversees mortgage regulation. He's denying he knew anything about said sweetheart deal. His fellow Democrats are refusing to look into it and furiously fingering alleged GOP cheap mortgage scofflaws. Citizens of Connecticut at this point are probably wondering if it's time for the state’s senior citizen senator to retire to his cottage in Ireland.

Now, certainly, we’d be no worse off without Dodd. He's a reliable vote for more and more of whatever his party wants and a life-long pampered pol. Who could ever forget his role as one bun of the famous Dodd-Kennedy waitress sandwich combo? But Dodd has his moments. He tried to shrug off charges of influence by insisting that he had made lobbyists cry. He inadvertently started Hillary Clinton’s tumble in the Democratic primaries by insisting that U.S. driver’s licenses are not a “right” but a “privilege.” Besides, the bluster and dodginess of Dodd is nowhere near as bad as the outsized influence of his counterpart in the U.S. House of Representatives, Barney Frank.

Frank has represented Massachusetts’s Fourth District since 1981, after John Paul II forced the prochoice antiwar priest Robert Drinan out of office. You might think a former Massachusetts state representative and Harvard-educated lawyer would be less of a pulpit pounder than an actual man of the cloth, but no. Frank has proved no less preachy than Drinan and a whole lot more vile and, ultimately, dangerous to the Republic.

Frank was the first openly gay member of Congress. He's often celebrated by the LGBT press but it's hard to see why the homosexual community should lionize this hyena of a man. He came out in 1987 and was reprimanded two years later by the House for allowing his boyfriend to basically run a bordello out of his—that is, Frank's—apartment. Nor was he happy to be loud and proud and alone. The "Frank Rule" is a term coined to describe his criteria for outing closeted gay politicians: If they don't take "homophobic" positions on issues (e.g., if they agree with Frank) then they deserve their privacy, but if they oppose some aspect of an ever evolving set of gay rights issues, and especially if they're Republicans, it's open season.

Ho hum, right? He's here, he's queer, we're bored. If Frank focused on gay issues, his influence would be practically benign set against the Barney Frank that actually prowls the halls of Congress, chairs one of the most powerful committees in the world, and barks orders at people. The Frank we know has no shame and a God-given gift for demagoguery. When a lot of poor blacks smartly decided not to come back to their waterlogged public housing in New Orleans after Hurricane Katrina, he accused Republicans of "ethnic cleansing through inaction." And on the broader issue of housing and afford ability, he has worked tirelessly to push the U.S. government, the housing market, and the world economy right over the precipice.

Economist Thomas Sowell's new book, The Housing Boom and Bust, points a long finger at Frank for getting us into this mess. Toward most of his villains, Sowell manages to stay roughly dispassionate, but he comes very close to writing, "Barney Frank, what an asshole." Sowell walks readers through series of Frank's trademark dismissive statements: Frank mocks critics of the ever-growing portfolios of government sponsored mortgage guarantors Fannie Mae and Freddie Mac. Frank says he wants to "roll the dice a little bit more" to subsidize housing. And, most laughably, Frank claims that the government won't be on the hook for any of this: "There is no guarantee. There is no explicit guarantee, there is no implicit guarantee. There is no wink-and-nod guarantee."

Sowell reminds us, "Such statements were not just some popping off by an isolated politician. Barney Frank was in 2003 the ranking member of the House Committee on Financial Services and would later become chairman of that powerful committee in 2006. He was a very influential force on the housing market."

So, sure, Connecticut voters, toss the bum Dodd out if it makes you feel better. But all you voters in Massachusetts's Fourth might want to take a page out of the progressive playbook and think of the children for once. After all, they're the ones who will be paying to clean up the mess your congressman did so much to cause.