Leave Religion out of Politics

Rather than a personal choice or set of beliefs, religion has become entangled in our political culture at every level. Time to separate church and state once and for all. 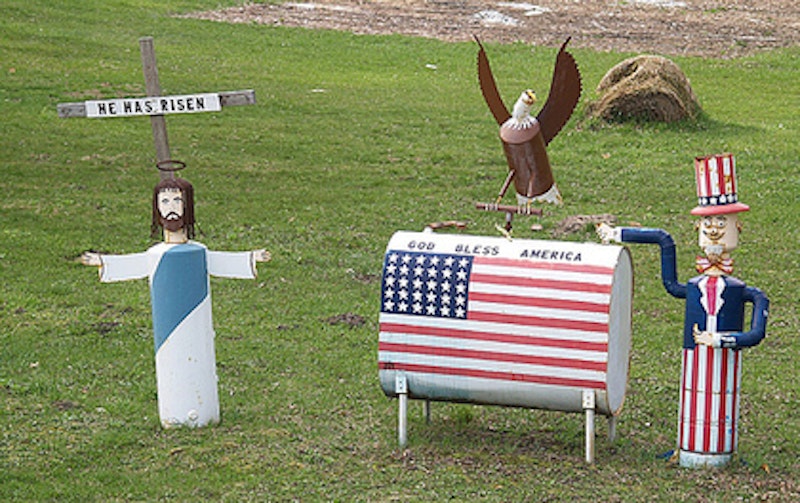 Last Thursday, my Splice colleague Chloe Angyal wrote a great article about Bill Maher’s film Religulous. Watching Maher smugly and self-righteously ridicule people’s faith-based beliefs and values, Angyal says she came to understand the pervasive anti-intellectualism that had previously baffled her. I too have expressed worry about our nation’s growing disdain for intellectuals and though I take slight umbrage with the idea of Maher representing intellectualism, I found Angyal’s piece to be a smart, evenhanded assessment of how Americans love to sneer at anyone whose beliefs differ from their own. What the article really got me thinking about though, is religion in this nation: how it is too closely tied to politics, how we consider it a measure of an individual’s character and trustworthiness and how, despite all our talk about being the world’s melting pot, “American values” seems increasingly synonymous with Christian ideology.

I am not a religious person and never have been. I spent a week one summer in elementary school attending Vacation Bible Camp with a friend and I remember having to recreate Noah’s ark with construction paper one day in Crafts. My finished project was just a mangled mess of brown paper with glued-on circles posing as animals. It didn’t remotely resemble a vessel of any kind, but when I passed it over to our teacher, she happily told me it was beautiful and how I had made God proud. I didn’t believe her then and I don’t believe it now. It’s not that I’ve never believed in God per se, but more that I’ve always assumed that if there is some higher power, it has bigger problems than worrying about the stuff I’m doing.

I recognize the importance of spirituality and faith, though. It can be comforting during times of fear or hardship. It gives meaning to life, a sense of purpose or guiding principles for day-to-day happiness and well-being. My husband is Jewish and though he doesn’t really subscribe to religious doctrine, that heritage is an important part of his identity. He likes the culture and traditions. Through Judaism, he’s linked to a rich and important history. He’s part of a global, Jewish community—one that experiences interconnectedness built on the foundation of religion. This is what religions do. They connect people: to each other, to god, to a set of ideals. And that’s good, desirable even. There’s nothing wrong with believing in something that you can’t prove, something in which you must simply have faith.

The issue I have with religion is that too often, people are not content to simply believe what they wish and go on about their lives. Too often people try to force their beliefs onto others and assert their own virtue. Indeed it is self-righteous to ridicule someone for believing that God created the earth. But it is equally if not more self-righteous to tell me that I’m going to Hell for not believing what you believe. It is that sort of sentiment that has gotten us to a point where we wonder how anyone can still think Barack Obama is a Muslim instead of asking the more appropriate question of why the hell should anybody care? Somewhere along the line, Muslim became this horrible dirty word, synonymous with Islamic fundamentalism and terrorist. If Sen. Obama was a Muslim, or anything other than a Christian for that matter, would that really be so bad? Are there not compassionate, wonderful people of Islamic faith? Are not all religious faiths subject to extremists and outliers? People keep asking how anyone can still believe he is a Muslim, but my question is, why is his religion even part of the conversation?

Our nation prides itself on exercising a separation of church and state. It is one thing that sets us apart from many other countries—we have no national religion. Our laws and policies are thought to derive from rational limitations and open, pragmatic debate, not based on a dominant religion’s ideologies. Yet no election, no political speech, debate or address to the nation can avoid inserting religious language into the political discourse. How many times have we heard the words “God bless” uttered by a political leader? God bless America. God bless the voters. The American workers. The troops. Even God bless you sir, said directly to someone posing a question. This language can’t help but create otherness. God bless such-and-such inevitably means “God bless those who believe that there is but one god who can indeed bestow its blessings upon us.” If you believe differently, then the language expressed by our nation’s representatives fails to properly reflect or include your beliefs.

I’d like to see this kind of language removed from the political sphere entirely. I’d like for it to not matter at all what religious group a candidate is or is not a member of—he/she shouldn’t be basing policy decisions on religious beliefs anyway. And I would love it if policy discussions could be devoid of religious ideologies entirely. If you are pro-life and truly believe abortion is murder and want to wave a giant poster of an aborted third-term fetus that you’re trying to pass off as a first-trimester image, fine. There are valid points to be made and different people believe different things. When you add a Bible passage to that poster, though, your point becomes moot. Personal beliefs about things like abortion, gay marriage or comprehensive sex education can and often should be based on religious doctrine, but the Bible cannot be used as support for creating or overturning laws. Further to this point, the debate over teaching Creationism alongside evolution in science classes is not a debate we should even be having. If it is so important to inform students of this alternative to the scientific explanation of human existence, then we should be pressing for the inclusion of a religion class in schools. Positing Creationism as the antithesis of evolution in our public schools presupposes that this is the only valid alternative to scientific theory. It leaves no room for and gives no credence to the many other religious beliefs we claim to be so accepting of.

I am not some anti-religion zealot. There are ways for people to live their lives based on religious principles without imposing upon others. And just as there are many deeply religious people who separate their political beliefs from their religious ones, there are many non-religious people, like Maher, who self-righteously think their lack of faith is most desirable. It’s just that politics and religion are so entangled in our nation that they’ve both come to resemble that Crafts project I did all those years ago—they’re practically unrecognizable as the vessels they were intended to be. We need to remove religion from the sphere of politics. We need to get back to the time when the word Muslim was just mistakenly interchanged with Islam, instead of a scathing indictment of person’s character.