Catholics who sneer at Barack Obama for being "pro-abortion" miss the point that his policies are more pro-life than any Neocon's. 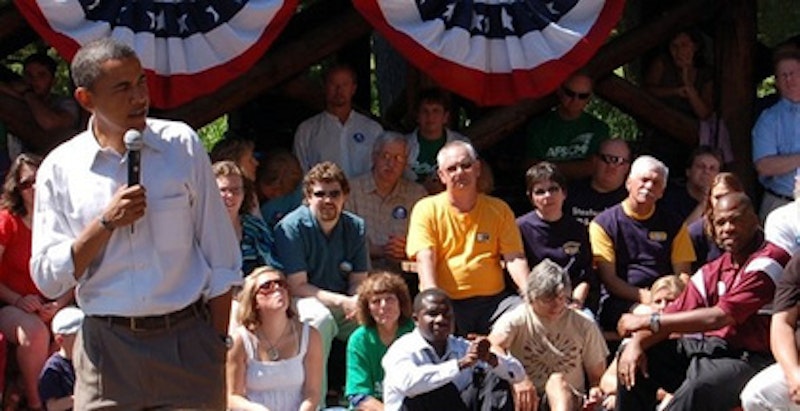 Memorize these verses and take them to heart when you see one party claiming monopoly on Jesus in the United States. Symbolism aside, the main question is: for a believer, who is to decide whether being a Democrat, even a pro-choice one, is evil?

As a Catholic, what are my choices in this presidential election? On one side, we have a much maligned Democrat with a pro-choice record. On the other side, we have a Republican who is pro-life on abortion issue while being anti-life in other matters. How would I choose the lesser of the two evils? I can deliberate on the effects of their policies and come upon my own opinion. My deliberations, soul searching, and research on the candidates have led me to choose Barack Obama as the candidate who reflects my Catholic values.

One prominent Catholic scholar who has come to the same conclusion is Douglas W. Kmiec, a conservative Reagan and Bush Sr. administrations official and leading pro-life legal scholar who endorsed Barack Obama despite his strong anti-abortion views. The main argument that he put forward was that Obama cares for the whole spectrum of pro-life issues including poverty, torture and human rights and that Obama's abortion reduction program would actually have a bigger impact on saving lives than a traditional war against Roe v. Wade. He recently published a book called Can a Catholic Support Him? Asking the Big Questions About Barack Obama and published an op-ed in The Los Angeles Times titled “For Obama and Against Abortion” on Oct. 17.

The reaction to Kmiec’s declarations was stunning. There was a huge backlash against him and the words that described his action included: duplicitous, treason, Benedict Arnold, treachery, traitor, delusion, etc. He was even denied communion by a priest at his church. These people might want to open their bible and read Matt. 7: 1-5, which starts with these words: “Judge not, that you be not judged.” What these critics fail to recognize is the reality in terms of the fight against abortions. Can any of these people come up with a practical way to address abortion issue that includes overturning Roe v. Wade?

So, as a Catholic who believes that we need to prevent abortions, I have come to the determination that Obama's policies would help the cause more than what John McCain is standing for. Let me explain how. The main evidence comes from Obama's response from the final presidential debate at Hofstra University. He said: “Abortion is always a tragic situation... and we should try to prevent unintended pregnancies by providing appropriate education to our youth, communicating that sexuality is sacred... and providing options for adoption and helping single mothers if they want to choose to keep the baby... Nobody is pro-abortion... We should try to reduce these circumstances.”

This reply alone proves that he sees the complete picture in the issue. Abortion is a symptom of a bigger problem and if we can curb the root causes, abortions will be drastically reduced. Now, contrast this very practical solution with McCain's opposition of sex education and support of abstinence-only education. Common sense and reality proves that it does not reduce unwanted pregnancies. We do not want an impractical solution that never contributes to the cause. Remember, it has not worked in decades. We need a solution that works.

An uncle of mine, who is an archbishop in Asia, has remarked that the Catholic Church in the United States has lost its direction fighting the war against abortion and gay rights. The debate sadly pushes aside the real issues that face the society; the real action that needs to be taken by us fellow Christians. Inequality and poverty should be the primary issues that we need to care about as a society. Abortion and gay rights, which are cases of individual morality, should be left to the individuals. I cannot agree more with Douglas Kmiec; this is federalism at its best, the issues solved first in the family, church and the community.

So, as a Catholic, I'd rather see the Church acknowledge that social morality is at least as important as individual morality. But Republican policies in the past decade have made me wonder if they even agree. Cutting health-care to children in different states is definitely not pro-life. Waging an unnecessary war that results in hundreds of thousands of deaths and trillions dollars of taxpayer money is not a Christian way of doing things. The so called neo-conservatives, whom McCain bravely fought against in 2000 and later sold his soul to, do not stand for my values as a Catholic. Their support for a baseless war, torture and death penalty makes them the real party of death.

If anyone thinks Jesus is siding with the GOP against the marginalized millions—the unemployed man in Pennsylvania who got laid off and had to pack his machinery to be sent to China; the uninsured mother who was denied coverage due to a pre-existing condition; or a widowed mother grieving over a son lost in Iraq—it is you who has some serious explaining to do, not Kmiec. And to suggest that it is a duty of a Catholic to condemn Barack Obama and anyone who supports him is a betrayal of the same values that Jesus gave us.