As American vegetable prices creep up, we should look to the third world for perspective on the actual food crisis. 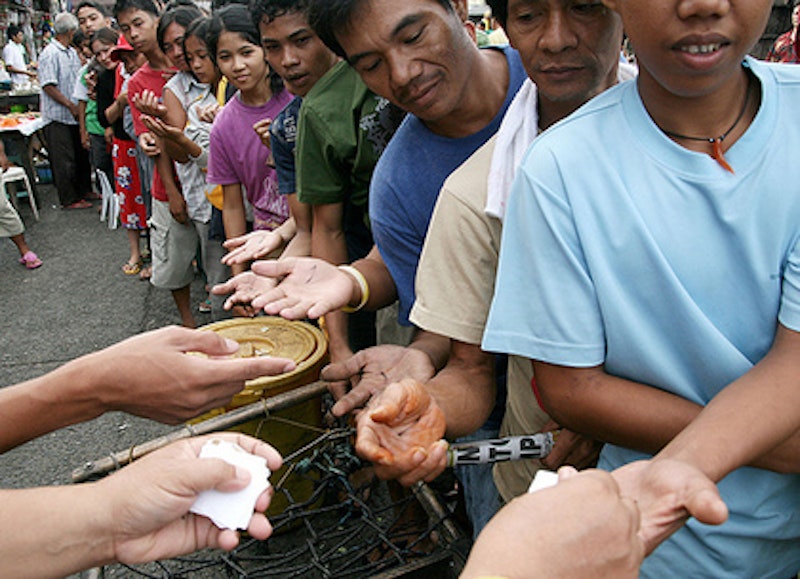 Vegetables have gotten so expensive. Fruit too. Not too long ago I could go to the grocery store and pick up some green beans for $.99 a pound, but the rising price of food has sent them skyrocketing to $2.99. I don’t eat them anymore, which is a shame because I really like green beans. Same goes for asparagus, and broccoli’s making a solid push to be added to the list. It’s a petty concern really, especially for someone who just spent $40 on a pair of shoes that I didn’t really need. It’s all a bit petty, the hemming and hawing over rising gas prices, the cost of food, the fact that the price of an airline ticket rules out a family vacation this summer. That’s not to say that we are not all feeling the effects of a struggling economy and a depreciating dollar. I have rent, student loan bills and car payments; I need to be a bit discriminating when it comes to vegetable expenditures. But when I read an article like Kevin Sullivan’s “Africa’s Last and Least” (from Sunday’s Washington Post) I’m left feeling more than a little selfish.

Sullivan tells the story of Fanta Lingani, a 50-something woman living in Ouagadougou, Burkina Faso, a landlocked nation in West Africa. Lingani gets up as early as four a.m., pulling herself up from a concrete floor where her children and grandchildren sleep around her. Her half hour walk to work takes her past her husband’s two-room hut where he sleeps, alone, in a double bed, and through the darkened streets of the city. She spends two mornings each week sweeping the city streets, earning less than $10 a month. Sullivan details an instance where “a tanker truck sped down the street, kicking up a cloud of dust into [Lingani’s] face and blowing away her little piles. She coughed, pulled her pink head scarf across her face and swept the same dust all over again…By 7 a.m., she’d finished her section. But she had to wait an hour for a male supervisor to show up and check her work.” It is back-breaking work for Lingani, “bent over at the waist, so far that her bottom [sticks up] higher than her head,” but necessary, as her wages combined with those of one of her co-wives make up the bulk of the family’s food budget; a budget that’s stretching too thin as the global food crisis continues to escalate.

Lingani’s husband, Hamado Zorome, is a 68-year-old retired police officer. His pension serves as the family’s main income, but in a country where “the United Nations says nearly 72 percent of the country’s 15 million people live on less than $2 a day,” this income is minimal, and Zorome likely keeps most of it for himself, refusing to tell his wives how much he receives. In the story Sullivan tells, Lingani receives $2.50 from her husband to spend on groceries, with instructions to spend only $.75 during her visit to the market and save the rest for later. Whereas a year ago such a nominal amount could buy meat, vegetables and peanut sauce for her 25-person family, she now goes over a budget when purchasing $.30 worth of baobab leaves (tough leaves from trees that populate this region of Africa), “four small onions…a bag of dried fish, a small plastic bag of salt, two small cubes of beef bouillon and a bag of potash,” a paste that is made by straining water through ashes. It is less nutritious, less filling and never enough to make three meals in a day.

It’s a sad story, made sadder by a cultural disparity in gender expectations. Men do not help with shopping or cooking. When jobs are scarce, as they are now in Burkina, men do not work, leaving women to earn what little money they can for their hungry families. Even when food is scarce, husbands are served first and get to eat from their own bowls. Children eat next, sharing a single bowl of food between as many as 11 people. Only when everyone else has eaten does Lingani serve herself, often taking only a few bites and giving the rest to her hungry children. “When the children ask for food, we have to give it to them…We’re mothers,” Lingani explains. She says, “Men and women should fight together for the children…But if men won’t do that, the women have to fight alone.”

But it is a fight that may cost them their lives. In a culture where gender roles are so rigid that even in times of economic and health crisis women are expected to be the sole caretakers of children and homes, they are forced to sacrifice too much, work too hard and suffer more greatly than those around them. According to the U.N. World Food Program, as reported by The Washington Post, rising food prices have forced “more than 130 million poor people,” deeper into poverty throughout the world. That means more hungry men and children and, especially in Africa, even hungrier and skinnier women, who suffer from increasing malnutrition. Even pregnant women and nursing mothers are forced to sacrifice medical care. Children, mostly girls, are being pulled out of school to save money for food. And more and more women are turning to prostitution to help subsidize the increasing cost of feeding their families. In nations where safe sex remains a rarity and the risk of contracting HIV is incredibly high, more prostitution means more women literally risking their lives in an effort to save their families.

This story puts everything in perspective, right? Sure it might cost me a little more to drive to and from work each day. As the price of food continues to climb, there will be more and more items that are edged out of my level of affordability. But that’s fine for now. I’ve never been a frivolous person, but I’m hardly frugal either, because I’ve never had to be, and even now a difference of $2 per pound on green beans isn’t going to make or break me for the future. It’s time to stop all the whining and complaining, to accept that we don’t always get to take the vacation we wanted. There are people in this world who work their whole lives without ever taking a break. There are people, women, who, no matter how hard they work, still struggle to survive. Just ask Fanta Lingani.