The mainstream media is helping Obama's presidency look all but assured. 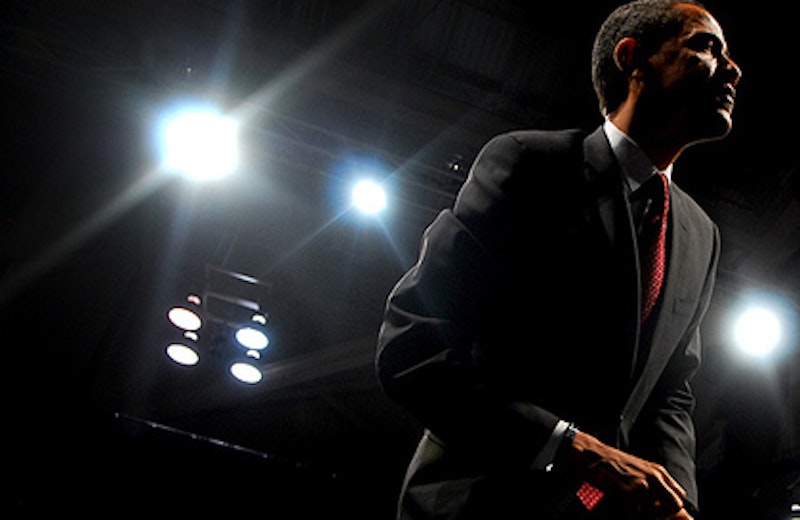 Maryland summers distinguish themselves in two ways: an unmerciful humidity that fogs up your glasses every time you step outside and biblical thunderstorms emerging from the incessant stickiness. A nasty week of humidity finally led to one such epic blast yesterday.

Factory-smoke-colored clouds began gathering a few miles off, lurking behind a dwindling hour of daylight. Feeling a touch wistful, I ran to my car intending to chase down the storm, maybe finding some of life’s answers in between bolts of lightning. I barreled down the country roads toward the storm, the sky above ever-darkening. The electricity in the air was so thick and so sharp—it was almost as though grinding one’s teeth could provide the necessary kinetic energy to set the whole sky on fire.

After 15 minutes of driving, the car was shrouded in the artificial dusk of storm clouds. Yet there was no rain to be found—only the pulsating current in the air, the flashes of pure-white light, and the deep-bellied chuckle of the thunder. The storm was upon us. The delayed rain was at this point only an upcoming symptom, not needed to prove the storm’s existence. It is worth reveling in the beautiful, melancholy fatalism of this phenomenon. The storm excites in some of us fear, in others wondrous awe, and in some apathy. How you feel about the storm, though, is irrelevant. It doesn’t need you to rage.

Barack Obama has officially entered the electricity-in-the-air stage of his campaign. What we saw before was merely the clouds in the distance, making their presence known over the hills. But now it is here. Only now, as we watch foreign leaders gravitate to Obama like snow caught up in an avalanche, can we really see the phenomenon he has become. The election may not yet be over, but, in reality, it is. Fatalism—the very same that promises rain with the storm clouds—has seeped into the American media coverage of the election. Something in everyone’s tone has changed slightly, a slight air of predictability seeping into a previously sealed box.

The media isn’t very good at telling you who is going to win. Otherwise, Hillary Clinton and Rudy Giuliani would be facing off in the battle craved for years by Northeast  “experts.” But if you tune out a little, and let the nonstop flood of information just wash over you, the truth starts to peek out of corners. On the surface, the media was giving Clinton a chance for months after it was mathematically sound, but after Obama’s impressive string of consecutive victories midway through the race, a change in attitude emerged.

Phrases like “battle-tested” began popping up. A new thread unraveled: the wise sensei Clinton whipping the fresh-faced student Obama, preparing him for his future as a warrior. Yes, the media acknowledged the battle, but those above the day-to-day fray of TV journalism began to hint that this was only training, not the battle royal climax. Always ahead of the curve, Slate brilliantly unleashed a “Hillary Deathwatch” widget, displaying the candidate’s moribund chances—her initial odds of victory were barely in the double digits—months before any other mainstream media began calling the race in Obama’s favor.

Then the true barometer kicked in, the “OMG THE MEDIA IS SO UNFAIR!” shtick started up. Countless Clinton supporters began asking the media how it could possibly consider itself objective with the way it was fawning over Obama. They claimed he was never scrutinized or criticized the way their candidate seemed to be fighting off the dogs every day. Slowly, this ranting—from as high as the previously beloved Bill Clinton—became increasingly desperate and delusional.

Enter Sean Hannity. As the Fox News host has increasingly become the face of today’s conservatism, you can see the current incarnation of the Republican Party has run its course. Hannity brings out the worst in his guests and his critics—frustrating them with constant interruptions and nonsense soliloquies, as well as providing writers at The Daily Show with endless clips of Hannity contradicting himself and/or being a huge dick. Even when I agree with him, I hate him, and you get the feeling his guests—even those that agree with him—feel the same.

It was not always this way. A few years ago, before President Bush’s approval rating began to plummet, Bill O’Reilly was the reigning conservative voice. Admittedly, I was a bit of a closet O’Reilly fan. Whenever he said something I thought was wrong, he really pissed me off, but when we were on the same page, well, it made me feel good. When we agreed, I felt a bit sensible and comfortable that we thought the same way about something. I was glad to find common ground with him—and you can tell Jon Stewart was, too, the way he always stepped over himself to be agreeable with O’Reilly—try comparing that friendliness with his rant against CNN conservative Tucker Carlson.

And before O’Reilly, there was RUSH. El Rushbo himself, Rush Limbaugh, was the face of conservatives for over a decade. Perusing The New York Times’ recent Rush Limbaugh profile, I came across a quote from a public-radio personality on page three that piqued my curiosity about Limbaugh’s show: “I disagreed with everything he was saying, yet I not only wanted to keep listening, I actually liked him.” Now, the only things I knew about Limbaugh came from Al Franken’s book and, well, The New York Times. So I figured I’d give his show a listen and watched a few pirated YouTube clips. And, uh, it was really good. No matter how much I disagreed with his evil, tubby smile, I found myself loving Limbaugh. He crafted clever and viable arguments no matter how crackpot I considered his ideas.

Thus, you have the progression. Conservatism quietly backed itself into a corner, where even the people that agree have trouble stomaching it. And now you have Hannity and Co. leading the delusional charge against Obama as John McCain struggles to find attacks that stick. There were Fox News stories about whether the media was over-covering Obama’s trip days before the man embarked. Fox News has probably covered the trip more than anyone else just so they can point out how unfair it is.

Oddly enough, all this hoopla shows that the trip has actually warranted the heavy media coverage. We now have half the press corps on hand to watch the next president show his charisma off to the world—without even realizing they were doing it. The rain may not come quite when we expect it, and it often waits until the last minute, but fear not, Obama hopefuls, the raindrops always fall with the storm.