The least John McCain could do is put up a fight. 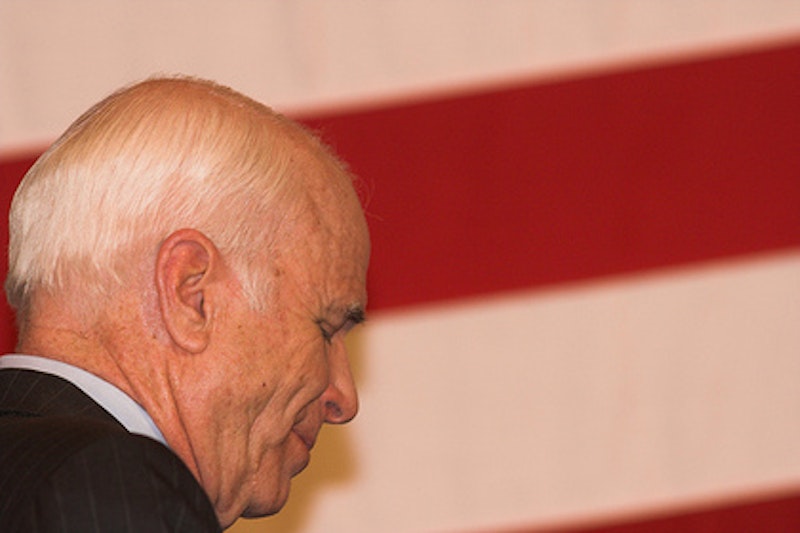 What in the world is wrong with John McCain and his campaign? Granted, McCain is facing an uphill battle on many fronts. For one, anti-Bush and anti-Republican sentiment is stratospheric. As the current GOP standard bearer, McCain obviously has a crippling disadvantage simply by association. When one factors in the phenomenon of Barack Obama and his historic candidacy, McCain’s challenge is even more daunting. Despite the enormous odds against him, though, McCain can still win this election, but only if he stops being such a terrible campaigner.

At present, there is simply no getting around the fact that McCain is a near-disaster on the stump. There are few positives I can point to: there are so many aspects of John McCain as a candidate that require improvement. It’s no secret that McCain doesn’t exactly knock ‘em dead at campaign appearances, and so it’s hard to understand why someone in his organization’s hierarchy hasn’t already taken steps to correct some of McCain’s most glaring weaknesses.

First and foremost, when placed in front of a teleprompter, McCain makes George W. Bush look like a gifted orator. The Arizona senator is robotic in his labored reading of the machine it’s almost comical. More often than not, it appears as though McCain is seeing the speech for the very first time as it scrolls down the glass screen in front of him. Why wouldn’t someone at the top of his campaign staff force McCain into some sort of a teleprompter boot camp? On Sunday, McCain spent the greater part of his day attending the Yankees game here in New York with Rudy Giuliani. I’d argue that those several hours would’ve been better spent practicing and improving his delivery of scripted speeches. (Particularly now, with Obama on his media-hyped overseas trip dominating the airwaves and headlines, the time is perfect for McCain to go underground for a few days of an intense campaigning clinic). Team McCain might counter that prepared speeches aren’t his strength, and that he’s best in settings such as town hall meetings where he can speak extemporaneously. That’s probably true, but the reality is that some of the most important upcoming speeches, such as his nomination acceptance, are scripted. These are also the ones that will command the most media and voter attention. It remains imperative that McCain improve his delivery from a prepared text or a teleprompter.

Next is figuring out some way to stop McCain from laughing at his own jokes, particularly with the evil-sounding chuckle he is prone to emit—often at the most inappropriate times. Third would be to remove the phrase “my friends”—an innocuous phrase he repeats with a compulsive zeal—from his public speaking vocabulary. McCain’s no idiot. He’s been a public figure for three decades and certainly knows the value of good political theater. There are people in Washington who are paid solely to provide this sort of critique and instruction, and since his campaign staff seems unable to correct these shortcomings, McCain could benefit from their tutelage.

All the blame cannot be placed solely on McCain, though, since any politician relies heavily on his staff and advisors to help him avoid mistakes. I’m not even sure anymore who is running the McCain campaign; there have been so many “reorganizations” and “reshufflings.” Given the current track record, it seems like the campaign is being run by a bunch of rookies with a shockingly severe tin ear to 21st century politics and the overall sentiments of the electorate.

One event in this election epitomizes the ineptitude of those running McCain’s campaign (and to some extent, of the candidate himself). On the night that Obama clinched the Democratic nomination last month, he was set to deliver a victory speech of sorts in front of tens of thousands of supporters in Minneapolis. McCain has shown no ability for attracting crowds a tenth as large (or as enthusiastic) as those of Obama, and on a night when his rival was sure to dominate the media coverage, the smart political move would’ve been simply to cede the stage and spotlight to him. There should have been a recognition that McCain cannot compete with Obama in a direct comparison of campaign events, and any attempt would not only be futile, it would be damaging.

But there was no such recognition, and what the McCain campaign offered was shocking in its dreadfulness. Appearing in Kenner, Louisiana, McCain spoke to supporters and, unfortunately for him, all of the cable news networks covered it live. It’s hard to count the number of mistakes at this event. The venue was dismal, some sort of warehouse or hangar—stark, dark and depressing. Making matters worse, the space was at best half full. Furthermore, for the first time (and mercifully, the last), the backdrop chosen by the McCain campaign was some sort of strange green color—“puke green” truly describes it best—which, when coupled with the insufficient and inferior lighting in the room only added to the malaise already permeating the appearance. To call the crowd’s reactions tepid would be charitable, and I got the sense that they would have benefited greatly from an “applause” sign like those used on game shows. And to call the crowd homogenous would be an understatement, as I don’t remember seeing anything resembling a broad representation of Americans.

Despite knowing that the networks would likely cut away from McCain to “officially” announce Obama’s securing the nomination, the campaign did not get their candidate started on time and so indeed, the networks did abandon McCain mid-speech—a blessing in disguise as it turned out, but an accidental and purely serendipitous one. Making a bad situation worse was McCain himself, delivering a long-winded speech via teleprompter that was awful to watch and hear—even by the aforementioned low bar McCain had already set for himself. He even threw in a healthy dose of chuckling—often timing it with each repetition of the speech’s tag line, “That’s not change we can believe in,” as though it were a hilarious joke.

Already facing a rather extraordinary candidate, competing with a news media biased in favor of Obama, and having to fight the anti-Republican, anti-incumbent tide, McCain doesn’t need nor can he afford to do Obama any more favors by continuing to flounder on the campaign trail. Despite all of this, victory remains a possibility for him, but it won’t for long unless McCain and his staff rise to the occasion. While McCain will never out-campaign or out-speak Obama, he must become more disciplined and eloquent in front of the camera, and his organization must simultaneously correct his weaknesses while accentuating his strengths. There’s still a long time between now and Election Day, but the changes for McCain and his campaign need to start immediately or he’s doomed.