The New Yorker film critic's new book-length spiel was only written a few months ago, yet it already feels like a relic. 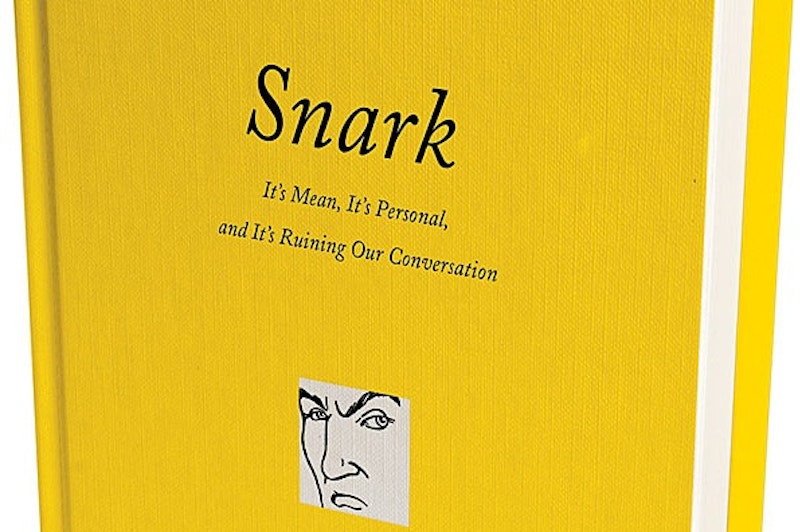 Last week the Internet at my office was on the fritz, so while a co-worker fiddled around for 45 minutes trying to restore access, I cleaned up a cluttered desk and found a Los Angeles Times review of David Denby’s largely incoherent Snark, a wisp of a book I’d read last month and quickly forgot about. David L. Ulin was more charitable to the sexagenarian New Yorker film critic—New York magazine utterly trashed the book, which was the norm—than Denby deserved, I thought, but the reviewer did his duty and noted the mass of contradictions in the insufferably pretentious 128-page essay. (Denby traces “snark”—a word that seems as anachronistic today as, say Tina Brown or flipping condos in South Florida—back to Juvenal and Jonathan Swift, which simply confuses his vengeful thesis.)

Yet the fatal flaw in Denby’s book, leaving aside his own petty score-settling and political partisanship, is that although it was written last fall and published shortly after—obviously a 100 m.p.h. turnaround for Simon & Schuster—his argument is already moot. Today, given the understandably sour mood of the country, “snark” is a four-letter word; few journalists who takes pride in their work get down in the gutter to take potshots at people or institutions that aren’t deserving of undue contempt. Katie Couric or the still self-aggrandizing Donald Trump, sure; a mid-level editor at Vanity Fair, no.

Even Gawker, one of Denby’s primary targets, has cleaned up its daily postings this year, either due to a sudden acquaintanceship with passable manners or, more likely, owner Nick Denton’s understanding that when Americans are getting laid off by the thousands, the stock price of The New York Times has fallen below that of its Sunday edition and a gripping financial panic even the magical Barack Obama hasn’t been able to solve, it’s time to lay off the crude gossip that at one time attracted so many gleeful visitors to his website. (In fairness, it should be noted that Denton’s remaining sites—he just folded the Hollywood-centric Defamer into the flagship Gawker—still draw huge amounts of web traffic.)

For instance, a year ago, when William F. Buckley passed away, the lead paragraph of Gawker’s obit read: “Conservative author, essayist, columnist, pundit, smug asshole, gadabout, secret spook, and blue-blooded creep William F. Buckley is dead.” The headline referred to the widely respected Buckley—on both sides of the political divide—as a “crypto fascist.” How tasteful. A few months later, when the news of Times publisher Arthur Sulzberger Jr. and his wife were divorcing was released, Gawker speculated that the scion had a “younger girlfriend.” Sulzberger has been a disastrous steward of his family’s business, in my opinion, but who could possibly care about his personal life? But those typical items were before the economic collapse: a post from Feb. 10 of this year was about the declining circulation of celebrity magazines, the same sort of information one could find on Jim Romenesko’s just-the-facts media blog.

In truth, the descent of “snark” may be traced to last February when the onetime hero of the airwaves Jon Stewart turned in a lackluster performance as emcee of the Oscars. In 2009, the everyday sadness and pressure of extraordinarily difficult economic conditions—now and ahead—has increasingly caused readers to eschew gratuitous nastiness. Making fun of others isn’t so funny anymore: to a certain extent, everyone’s in the same slowly sinking boat, and wise-guy talk isn’t endearing under somber circumstances.

Denby, who takes pains to demonstrate he’s no prude and is fond of a well-aimed poisoned arrow at those he perceives as mendacious, is so out of touch that he devotes a chapter to the “snarkiness” of Times columnist Maureen Dowd, a woman whose silly pokes at politicians have long been irrelevant to what the author grandly calls the national “conversation.” Inexplicably, he doesn’t put her colleague Gail Collins in the same dinghy, even though her commentary is almost—almost—as inane as Dowd’s. In a Feb. 12 column, ostensibly about the lack of gravitas in the Obama administration—she dumps on tax-challenged Treasury Secretary Tim Geithner—out of nowhere comes this sentence: “The movie star du jour is Mickey Rourke, 56. Rourke has truly been preparing for this moment [an Oscar nomination] all his life, since thanks to some interesting lifestyle changes, he has looked 56 since around 1987.”

The single redeeming feature of Snark in my own mind is that at one point in the essay he uses the word “sorehead,” a long-forgotten colloquialism that was common in my youth. But that hardly makes up for his savage treatment of the great writer Tom Wolfe, who, because his relatively conservative views don’t mesh with Denby’s, is clumsily belittled as a practitioner of “snark.” This is a little confusing, so bear with me. Denby reconsiders Wolfe’s 1970 classic book Mau-Mauing the Flak Catchers (an expansion of his New York article “Radical Chic”) and now considers the send-up of limo liberals like Leonard Bernstein and Barbara Walters as “fatuous” and the “turning point” of his career.

But then: “After ‘Radical Chic,’ [Wolfe] wrote a fine, ultrasquare book about the American astronauts, The Right Stuff (1979), and a fascinating novel about the fools of eighties finance capitalism, The Bonfire of the Vanities (1987)… Wolfe then became a rather sour neocon, apostle to the op-ed page of The Wall Street Journal [the gall!] and the conservative think tank the Manhattan Institute.” He then suggests Wolfe’s trademark white suit (he was born in Richmond, VA) might be symbolic of the author’s racism rather than a stylistic quirk.

Okay, so Wolfe turned into a “snarky” predecessor to the editors at Spy (also spanked by Denby) and Gawker typists with “Radical Chic,” but still wrote a “fine” book six years later. Also, when Denby refers to the “fools” of 1980s Wall Street, he might’ve had the decency to mention that he himself wrote a book in 2004, American Sucker, about his own “foolish” investments in the dotcom bubble.

Nick Denton is too smart a businessman to let his online cash cow go bust for the sake of Gawker’s “editorial integrity,” such as it is. When, last fall, he predicted a far gloomier revenue stream for websites, he once again demonstrated an uncanny prescience (along with a penchant for attracting publicity) about the communications industry. Denby, like a decreasing number of “notables” in the media, still doesn’t get it, failing to realize the shift in American popular culture.