And what it means for our deepest held beliefs. 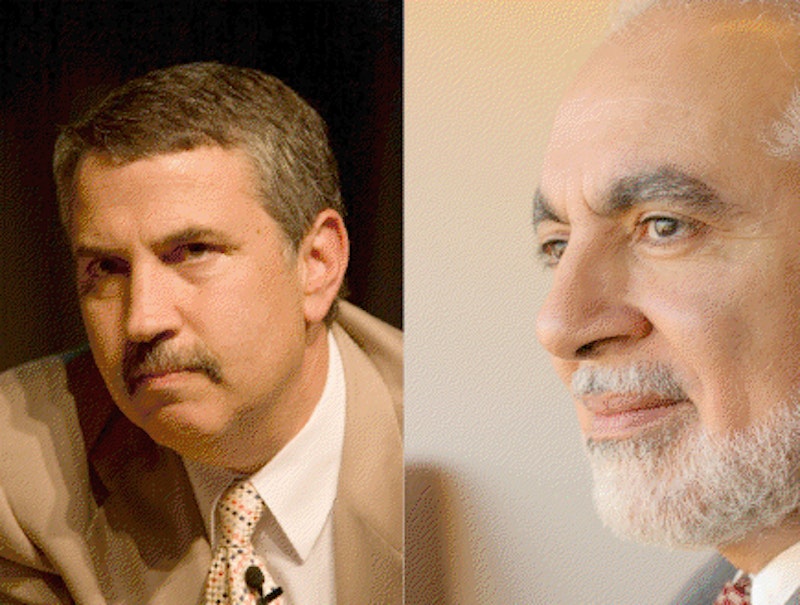 In Demian Kendall’s recent post, Friedman Misses the Point of the Mosque Controversy, he falls into the very trap which Friedman prepares for his readers.

I agree with DK on at least two important claims.  First, that Friedman fails to connect his dots.  The New York Times opinion writer, in fact, wrote a saccharin review of his weekend and threw in a couple provocative lines about a topical controversy.  Don’t worry, though, he linked the two, sort of.

Friedman has long been amongst the most sensitive cultural commentators, but given his wealth of experience in the faceoff between Islamic and Judeo-Christian cultures, it is a wonder that he chose to illustrate his point through “A Broadway Celebration: In Performance at the White House.”  This guy did, after all, spend the 1980s dodging bullets to write home about his front row seats to the First Lebanon War and Intifada.  So yeah, he chose a weird example to make his argument.

As for our other point of agreement, this mosque is a bad idea.  Intentional or not—and I sincerely believe not—its construction offends the sensibilities of many families of victims and many of those individuals who selflessly risked their lives, either on duty or off.  One thing I’ve learned about myself in the last nine years is that, when they’re upset, I’m upset.  And that’s on days when I don’t feel they’re being marginalized or insulted.

Let’s face it, folks, their visceral emotional revulsion to this building is justified on some level.  It’s not justified because evidence that the faithful who will pray at the Cordoba Center are anything other God-fearing Americans.  But it doesn’t need to be.  Given what they’ve gone through, they shouldn’t have to endure further hardship, if that’s what this will be for them.  We have a responsibility to be more considerate around this particular group of people.  That conscientiousness oughtn’t be enshrined in law, but it is good form.  So their opposition may rely on the bigoted presupposition that Islam is synonymous to terrorism, but their pain is real, and needn’t be aggravated.  These people are victims, too.

If there were a dearth a mosque’s in New York City’s Lower East Side, opponents say, maybe we’d understand the choice to build it so close.  This is being built to make a point.  To deliver a message.  But wait!  It’s going to broker interfaith understanding and mutual respect, proponents say.  Besides, we never did anything wrong, and we’ve been targets of discrimination for a decade!

But there’s a more palpable reason it’s a bad idea, one which will be easier to understand by way of a point drawn up in The Economist’s Lexington column.  Lexington takes the stance that “this is hardly rocket science.  America is plainly safer if its Muslims feel part of ‘us’ and not…part of ‘them’.”  In short: build it lest we run the risk of railroading America’s good Muslims into a life of fundamentalist violence directed at the rest of us.  The notion that good Muslims are so much more susceptible to extremist religion is wrong, full-stop.  One might make the argument, rather, that building this mosque invites violence of another sort.  In this case, it might yield violence against those who pray there, or perhaps those responsible for its approval.  Either way, the issue has intensified, and appears to have invoked in many Americans the same pre-intellectual hatred recognizable in our enemy.

DK doesn’t quite come forward and state his position one way or another, but if I had to guess—based on the talk about black lumps of sorrow and inchoate rage—he isn’t any more thrilled about the idea than I am.  Besides, it reflects poorly on Imam Feisal Abdul Rauf, the activist, man of God and public intellectual spearheading the construction of the Cordoba Center, for both the reasons I mention above:

1.     It just seems disrespectful to violate the wishes of those people who continue to suffer as a result of 9/11—even though they incorrectly associate Islam with their suffering.  Awareness-promotion and cross-cultural acceptance requires both recognition and forgiveness of those who fundamentally cannot, or will not, change.  Practically speaking, moreover, pissing off 9/11 victims’ families doesn’t win you many popularity contests across the United States.

2.     The controversy this generates will probably do more harm than good.  What sort of image is Imam Rauf trying to convey?  Using his reputation as a microcosm of the larger issue at hand, he has not received the charitable picture of a compassionate man that his résumé suggests he deserves.  It is, instead, the picture of a man in pursuit of a political agenda at the expense of the devastated, if misguided, victims of 9/11.

There’s also the compounding effect of these thoughts; I believe the mosque’s construction will yield results inconsistent with its stated objectives.  However, there is an even more important issue at stake here, namely the distinction between distaste and disallowance.  We are a great and exceptional nation that provides for citizens’ expressed displeasure at every turn.  Don’t like something?  Tell everyone.  But in order for that to continue to work, rules need to be limited.

By contrast, take what the Anti-Defamation League had to say about the construction proposal: “…this is not a question of rights, but a question of what is right. In our judgment, building an Islamic Center in the shadow of the World Trade Center will cause some victims more pain – unnecessarily – and that is not right.”

Maybe it isn 217;t right, maybe it is.  Thankfully, that sort of judgment call was ironed out of this discussion by our Constitution.  And this is where Friedman, invoking the battle-tried argument about liberty’s slippery slope, does not miss the point, and, where DK does.  Friedman holds that, by allowing the mosque to be built, “we send such a powerful message of openness and inclusion… [that people will continue to say] ‘What a remarkable country! I want to live in that melting pot, even if I have to build a boat from milk cartons to get there!’.”

Leaning into our own discomfort is healthy, though I’ll be the first to admit it’s a difficult thing to choose to do, either as an individual or as a society.  It would be damn difficult to get a majority of Americans to vote in favor of the ‘Ground-Zero Mosque’, given a choice, but that’s precisely why the Founders have taken care to enshrine a defense against de Tocqueville’s ‘tyranny of the majority.’  Except under explicitly legislated circumstances, any one person is free to push the envelope of our collective discomfort alone.  To take away this magnificent power of the one to challenge the many would be, quite simply, un-American.

There is no question, for me, that we are an exceptional country, and if we begin to compromise our most deeply cherished values—even at the most gut-twisting times—we are in danger of conceding that exceptionalism.  It is incumbent upon each one of us to dig deep so our City stays planted upon its Hill.