Bring the Terrorists to Maryland

Someone has to end the ridiculous charade surrounding the placement of Guantanamo detainees. 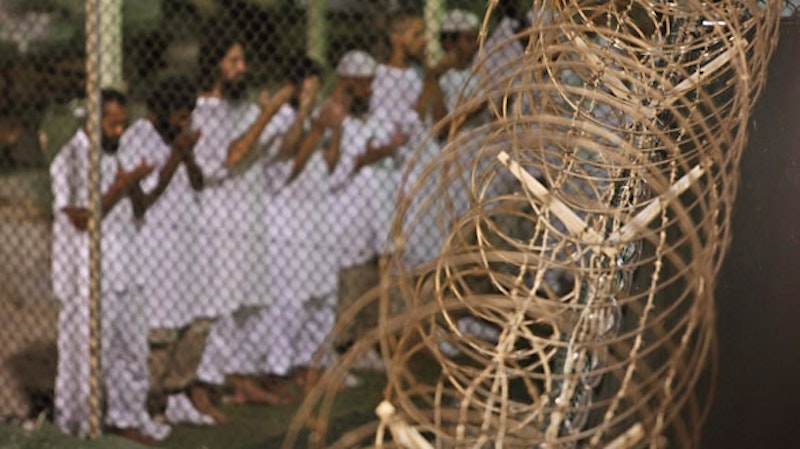 It's disturbing that one of the major difficulties in the struggle to shut down the ongoing national embarrassment at Guantanamo Bay stems from the unwillingness of any local jurisdiction to accept terrorists in their civilian prisons. The fact that this misdiagnosed bout of populist anxiety might actually halt the termination of one of the least attractive chapters in recent U.S. history is as ludicrous as it is discouraging, particularly since any rational assessment reveals these fears are totally baseless.

America is perhaps the most experienced and successful jailer in the history of mankind-at recent count, we have roughly 2.3 million men and women under lock and key within our borders, more than one percent of our total adult population. One wonders, given our long history of success in this field (if success is defined as incarcerating horrifyingly large numbers of the body politic) why at this critical juncture the populace suddenly has come to doubt our well-demonstrated record of excellence in this area? Buck up, America! We may not be able to make cars, balance our debt or conclude wars, but we lock up citizens with the best of them!

Something hot leaps up in my chest at the suggestion that some foreign-born miscreant is to be considered more dangerous than an American thoroughbred. It is understandable that a nation raised on Tom Clancy novels has an inaccurate understanding of the skills and resources of a terrorist operative, but there is no reason to think a transfer from Guantanamo Bay would represent any more substantial an escape risk than the average felon, and many reasons to think they would be less capable than a homegrown rapist, murder or drug dealer. The detainees in question have no special spy skills-they are not masters of Judo, suave double agents, superhuman killers, proficient escape artists, nor any other of the villainous archetypes our fantasists create to bedevil and beguile their square-jawed protagonists. Had these prisoners any extraordinary abilities upon their arrest by U.S. forces, one feels assured that spending a half-decade-plus beneath the tender ministrations of the Bush administration has likely not done wonders for their mental or physical capacities, anymore than it has for the moral standing of the nation.

For the sake of argument let's say that a few of these foreign nationals, using their secret terrorists powers, manage to flee their incarceration-what horrifying calamities does one foresee from the escape of a former-Guantanamo detainee that aren't matched by the theoretical consequences of the escape of the aforementioned American-born sociopath? Do we expect them to set up a doomsday machine in the area using whatever materials are handily available? Again, one would expect an escaped terrorist to be less of a threat than an escaped criminal of another kind, given the limited facility with the language, incomplete knowledge of geography and lack of local support. Or to put it more bluntly, a group of escaped Arabs in orange jump suits would stand out in Leavenworth, Kansas like, well, Arabs in Kansas.

Very few people, participating in an anonymous phone poll, are likely to tell someone at Gallup that they are thrilled at the notion of convicted terrorists living in their backyard, even if "backyard" is defined as the large super-maximum security prison in the outskirts of their state. Equally few politicians, presented with these numbers by their staff, are likely to agree to said proposal in defiance of their constituents' wishes. But, like a great many unpopular things, this needs doing, and should some senator or governor be good enough to shoulder this burden, they could at least rest comfortable in the knowledge that after an initial wave of popular displeasure, the public's memory in this matter would prove as brief as their judgment has proven poor.

As I see it, the price we pay for invading alien countries and abducting foreign nationals is that we have to find a place to put them. Given that housing them extra-judicially in the curious geopolitical appendage of Guantanamo Bay seems finally to be proving objectionable to our legal and moral standards, another option must be found. It's time for some community to step up.

Speaking as an unelected representative, I nominate my home state of Maryland, and more particularly the Maryland Correctional Adjustment Center, a super-maximum security prison. Citizens of the Old Line State, and in particular my fellow Baltimoreans, have fielded in the latter half of the 20th century an extraordinary crew of felons. In exchange for whatever generous federal subsidy the Obama administration is willing to offer, we would be happy to lock up a few dozen terrorists and throw away the key-sort of The Wire vs. 24. If Khalid Sheikh Mohammed tunnels his way out and builds an atomic bomb out of hard-shell crabs, I suppose the Chesapeake area will pay for my foolhardy insistence on upholding the Constitution. But in the interim we'll take what small credit we deserve for maintaining national security in a fashion consistent with history and core principles.