O’Malley’s a Cinch for '10 Reelection

In a less Democratic state, the Governor might get caught in an anti-incumbent whirlwind. 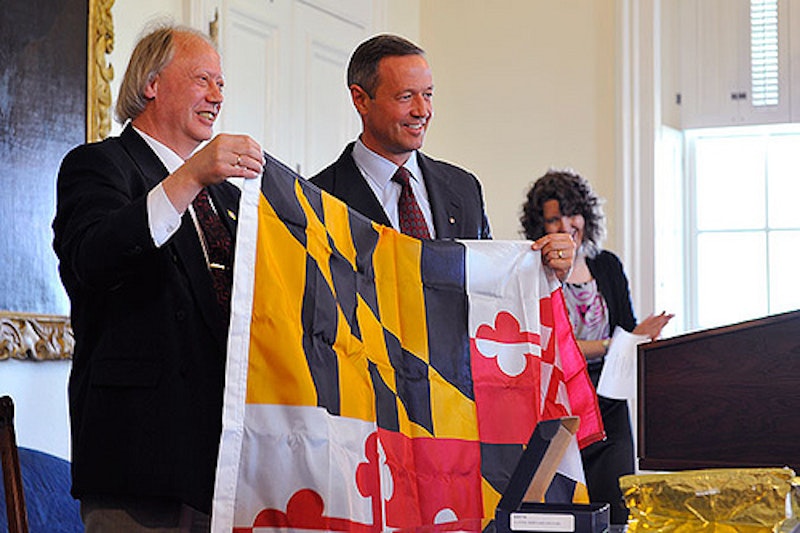 Photo by The National Guard.

Maryland Gov. Martin O’Malley is one lucky guy. No name-brand Democrat will run against him and no Republican can beat him.

Incumbency is a powerful political weapon and, more often than not, a free pass to reelection. With polls in hand and cash in the bank, O’Malley is tooling up for second run even though he’s said to be impatient with the pesky details of administrative office as well as entertaining the itch of ambition to be in Washington.

But in another state with a different set of demographics than ebony-and-ivory Maryland, O’Malley might be hiring a miracle worker instead of a campaign manager. Maryland, to the surprise of no one in the 12,407-square mile blue zone, has just been declared the third most liberal state in the nation. The citizenry is in an ugly and unforgiving mood (just ask Sen. Ben Cardin), demonstrating a public display of flush-faced ignorance and rage not seen in Maryland probably since segregationist Alabama Gov. George C. Wallace (D) campaigned for president on the Eastern Shore in 1964.

It’s a bad time to be governor, even in a state as wealthy as Maryland, buffered as it is against the worst of a recession by a huge government presence—federal, state and local—that employs 26 percent of the state’s workforce. O’Malley’s caught between the devil and the deep. Within a two-year bracket, he’s had to enforce the largest tax increase in Maryland history ($1.5 billion) as well as begin cutting millions upon millions (currently $470 million on the chopping block by Labor Day) from the $33 billion state budget because of declining revenues. The cropper includes a proposed $250 million in aid to local governments, according to news reports.

In many other states those twin scourges alone might augur disaster if not defeat. But in Maryland, governors tend to benefit from voters’ short memories and charitable forgiveness. Remember, Former Gov. Bob Ehrlich (R) was the first Maryland governor in nearly 60 years to be ejected from office when O’Malley defeated him in 2006 and the only sitting governor in the nation to lose that year. (Spiro T. Agnew abandoned the governorship in1969 after two years for a resume upgrade to vice president.)

To be sure, there have been some distant but barely audible rumbles about challenges to O’Malley next year. On the Democratic side, former Montgomery County Executive Doug Duncan, who dropped out of the primary race against O’Malley in 2006, has been kvetching about O’Malley with suggestions that Maryland needs a new governor. And a former legislator from Southern Maryland, George W. Owings III, a Democrat who served as veteran affairs secretary under Ehrlich, says he might consider a run against O’Malley. So far, that’s it. Not much cause for heartburn in the governor’s mansion.

For Republicans, the task is daunting if not downright depressing. Only three fringe figures have timidly stumbled forward—Mike Pappas, an attorney, and Baltimore County Del. Patrick L. McDonough, who bangs the drums against illegal immigrants. And Larry Hogan, Ehrlich’s patronage secretary, is also mumbling about running. Much of the rap sheet on O’Malley is more about personality than performance. He’s viewed as arrogant and snippy, a potty-mouthed rascal, although he’s cleaned up his act considerably since his early days as governor and his years as mayor of Baltimore.

He has, except for special occasions, put away the guitar and muscle shirt of his rock star days for the more sedate tailored look of a chief executive. And the rumors of extra-marital escapades that bedeviled O’Malley during the 2006 campaign have long been discredited and dismissed. There have been no scandals or embarrassments, although there is the risk of O’Malley being dragged into the scheduled trial of Baltimore Mayor Sheila Dixon—if it proceeds that far.

Politically, O’Malley’s a moderate-to-liberal progressive governor who’s had more wins than losses in the General Assembly. In the 2009 session, for example, he pushed hard for his signature issue, the repeal of capital punishment, and in the end had to settle for a compromise, which, nonetheless, makes it difficult if not all but impossible to impose the death penalty in Maryland. But if there is a critical area of vulnerability for O’Malley in a time of recession and angry populism it is this: electricity rates.

O’Malley campaigned at kitchen tables and in backyards against soaring electricity rates and the election-year promise to lower the costs that resulted from deregulation. He blamed Ehrlich and his GOP-controlled Public Service Commission for the increases. O’Malley has made his life’s work as governor the lowering of electricity rates but has failed to produce any significant relief. Mainly because he’s powerless to do anything. In fact, energy costs have continued to soar. Yet O’Malley continues to pound on Constellation Energy Group and BGE (they’re a corporate blur) and their officers, especially CEO Mayo Shattuck. Overreaction on the energy issue could backfire on O’Malley if effectively exploited.

Yet for all of his real or imagined vulnerabilities and shortcomings, O’Malley is the beneficiary of a rock-solid Democratic party structure—one that he helped build. Through O’Malley’s solid organizational skills in 2006, and the added layers of the Democratic State Central Committee and the Obama campaign in 2008, Democratic registration in Maryland is now better than 2-1 at 2.1 million and counting. And in Maryland, at least, the governor is the de facto head of the Democratic party. Black and Hispanic populations continue to grow in Maryland and they tend to vote overwhelmingly Democratic. In 2008, Obama collected 90 percent of the black vote and 70 percent of the Hispanic vote nationwide.

For the 2010 election, the Democratic party will be united across the ballot. Seven of eight Maryland members of Congress are Democrats as are most of the big-county executives, although Jim Smith of Baltimore County and Jack Johnson of Prince George’s County are term-limited. The likelihood of a Republican being elected executive of either county is near zero. In the gestalt of politics, each layer contributes to the whole. A candidate’s voter turnout is the key to primary elections. Primary elections are family affairs. They’re about identifying and organizing the vote and getting it out on election day (or during the early voting period.) General elections are about issues and personalities.

By contrast, the Maryland Republican party is, if this is possible, in worse shape than the national party. It’s broke and in debt, it is bitterly divided between its elected officials and the party chairman, and its registration numbers have actually dwindled to a tad above 800,000, not too many more than the number of registered independent voters who now total about 550,000. There is no GOP organizational structure for candidates to rely on.

Recently, for example, Republicans in the General Assembly expressed a vote of no confidence in the party chairman, veterinarian James Pelura, after he abruptly fired the party’s executive director. Pelura refuses to budge despite calls for his resignation. Because their ranks are thin, they have no reserve system by which to elect and groom candidates for higher office, i.e., the governorship. On that point, Ehrlich’s a tease. He might be giving false hope that he’ll attempt to recapture the office he (and the party) lost. But, in fact, he’s doing the party a disservice by refusing to commit and preventing other candidates from tip-toeing into the competition. In 2006, Ehrlich had a favorability rating of 55 percent but nonetheless lost to O’Malley by six percentage points or about 70,000 votes. Registered independents, because of their growing numbers, have become the new swing vote and they tend to vote heavily Democratic.

Republicans hold only one Congressional seat, that of Roscoe Bartlett of Western Maryland. Not much vote-pulling power there. They lost the First District seat in 2008 when Ehrlich refused to support the incumbent Wayne Gilchrest who, after being defeated in the primary, endorsed the Democrat, Frank Kratovil, who won over Ehrlich’s candidate, State Sen. Andy Harris. So, because of the kind of state Maryland is, and the kind of relentless candidate that O’Malley is, he’s in great position to win a second term as governor.