The President's first month has had too much Pelosi, not enough Obama. 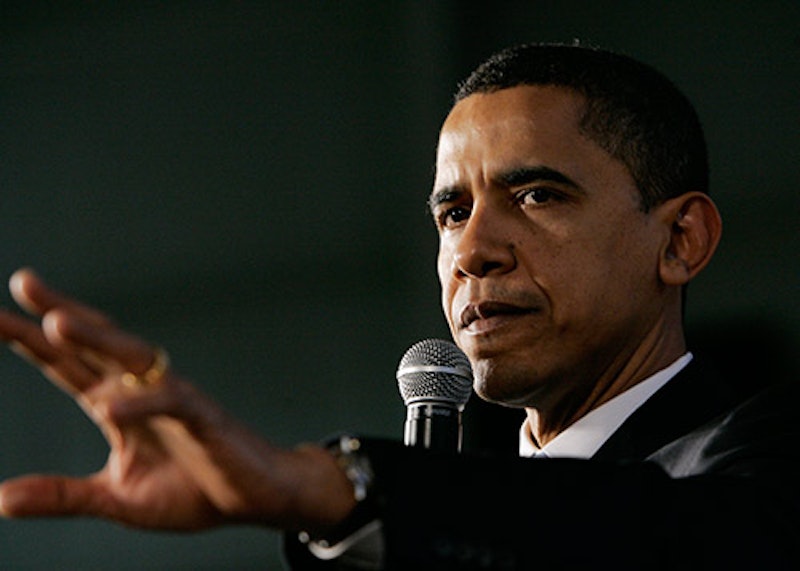 Just a few months ago, Barack Obama and the Democrats were handed the presidency, the House and the Senate, thanks in large part to the missteps and ineptitude of the Republican Party. No one in the GOP was free from blame—certainly not President Bush and particularly not Congressional Republicans. As Obama easily defeated John McCain, most observers believed the Republican Party was headed for an extended stay in political purgatory. While I didn’t like it, I felt that the party was getting what it deserved. One would have thought the Democrats were ready to roll. After all, the electoral preference was clear for most of last year and the November results were never really in doubt. There were months of time for meticulous planning, and if the Obama campaign and its remarkable discipline were any indication, most expected a smooth start. It’s now been a month with the Democrats completely in charge, and it’s been somewhat rocky. If this continues, Obama and his party risk making the Republicans look capable by comparison.

Perhaps the most obvious mistakes the new administration has made have been the cabinet appointments. It’s unclear whether these mistakes resulted from a flawed vetting process, a misguided belief that the appointees’ political baggage would not sink their nomination, or a combination of the two. Nevertheless, the overall impression is one of sloppiness and disorganization. Preceding Treasury Secretary Timothy Geithner’s troubles—due to unpaid taxes—were those of New Mexico Gov. Bill Richardson. On the same morning that Tom Daschle’s cabinet withdrawal was announced, Nancy Killefer, Obama’s choice for the newly created position of Chief White House Performance Officer, announced that she was also stepping aside because of, yet again, tax problems. Rounding out the turbulent appointment process was the withdrawal of New Hampshire Republican Sen. Judd Gregg, whom Obama had appointed as his (second) choice for Commerce Secretary.

Less visible but more significant were the errors Obama and his administration made in the crafting of and justification for the massive economic stimulus package. Put simply, Obama ceded far too much control of the process to House Speaker Nancy Pelosi and Senate Majority Leader Harry Reid. As a result, the bill, which Obama told Americans on numerous occasions was vital to avert a catastrophe, is laden with just the sort of projects and earmarks for which Congress—under Democratic and Republican leadership—has earned record low approval ratings, and against which Obama campaigned. A few examples of the “urgent” measures in the bill include $1 billion for the census, $300 million to buy hybrid cars for the federal government, $50 million for the National Endowment for the Arts, $30 million for salt marsh harvest mice in the San Francisco area and $8 billion for new high-speed railways, including one connecting Los Angeles and Las Vegas.

Not coincidentally, I suspect, the San Francisco area is represented by Pelosi, and Nevada by Reid. Pelosi and Reid had also promised the public 48 hours to review the stimulus bill before putting it to a vote—a reflection, no doubt, of Obama’s promise of unprecedented transparency. Yet when all was said and done, not only did the public not have 48 hours of review, members of Congress, those who were actually voting on the measure, had only a mere 10 hours to review a bill of nearly 1100 pages. Why the rush? While I’m sure Pelosi and other Democrats would point to the urgency of our economic situation as the reason, Obama didn’t seem particularly concerned about the need for immediate action, waiting several days to sign the bill into law. The contradiction between the words and actions of Obama, Pelosi and Reid was striking, and the entire process lacked the discipline for which Obama’s campaign was so often praised. Perhaps this was because Pelosi and Reid were running this show, an ominous sign.

As I watched President Obama speak in Denver ahead of signing the Stimulus Bill, I was struck by the fact that we may be witnessing the beginnings of a permanent campaign on the part of the man who just won the election. Never have I seen any president take a bill signing ceremony “on the road,” yet Obama did. Nor do I recall any president signing a bill in a campaign rally-like setting. Both had the atmosphere of a candidate in the midst of an election and neither seems worthy of the office Obama now holds. Additionally, I can’t think of one day since the inauguration that Obama hasn’t graced the television with his presence, and while the president is certainly the most visible public figure in America and should be seen and heard, there must be such a thing as an Obama-overload. This same campaign-like mentality also seemed to be in effect at the president’s prime time news conference last week. There were multiple times in the course of the hour-long event when Obama made a point of reminding viewers that many of the country’s current problems were ones he had merely “inherited.” While this may be true, it had the unattractive feel of someone trying to shirk the responsibilities of the presidency.

After all, this is the same guy who reportedly gloated, “I won” to justify dismissing concerns about the stimulus bill expressed by members of the House GOP Leadership. Obama can’t have it both ways. He did indeed win, and in choosing to seek the highest office in the land, he tacitly acknowledged that upon victory, he would assume full responsibility for everything. Constantly reminding Americans that he didn’t start the fire won’t effectively avert their nervousness. Blaming Bush was effective during the campaign, but in continuing to do so, Obama again comes across as a permanent candidate rather than a self-assured president. Are we in for four years of the Candidate-in-Chief and a White House in constant campaign mode? I hope not.

President Obama is intelligent and very politically astute. The same can be said of his advisors—many of whom helped run his remarkable campaign. The first month, however, was not a strong one for him or his party, and the heavy involvement of Pelosi, Reid and other Democratic notables played no small part in the bumpy start. The campaign is over now, however, and the real work has begun. The tools for successful campaigning are different from the tools for successful governing.

Will Obama and the Democrats be able to govern as effectively as they raise campaign funds and excite voters? While the first month hasn’t inspired confidence, there is time for improvement. Obama must limit the influence of the Democratic leadership in Congress, and he must approach the presidency with the seriousness and gravity the office and the moment require. If he can do this, he and his party will prosper, and more importantly, so will the country.