What's the Point of College Humanities? 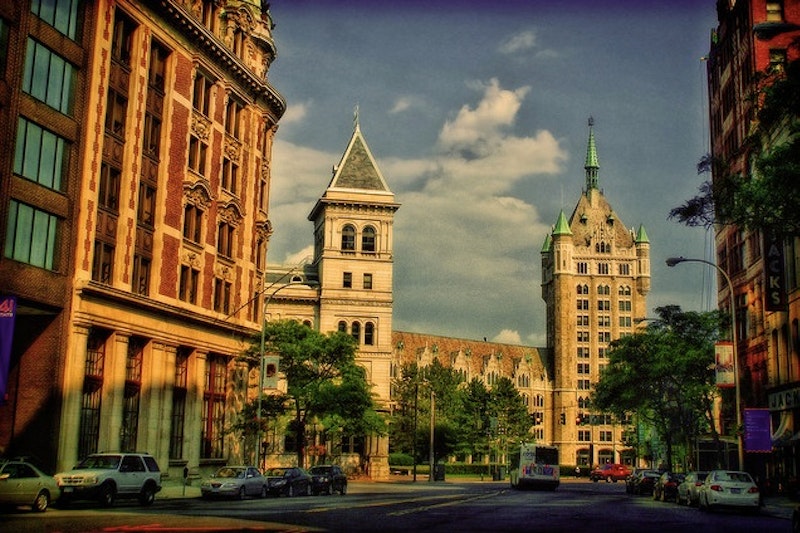 Here at the University of Iowa, which orbits its football program as the moon orbits the earth, a half dozen men and women with Ph.Ds are frowning and shaking their heads. We sit around a conference table in the Dean’s Room, a windowless chamber filled with books on Latin American political strife. In the corner a Keurig coffee maker sits atop a miniature refrigerator. One of the university’s many rules forbids us from using this—our coffee comes from heavy plastic dispensers on the table. They stand like scale model silos.

The chair of our committee has just recounted some news: SUNY Albany has eliminated its French, Italian, theater and classics programs (classics! French!). I am taking notes and frowning along with everyone else. Albany found a way to fire a group of tenured faculty large enough to form a very bad soccer team, and this chills the academic soul.

In this particular room our malaise takes the form of aesthetic distaste. Almost everyone here comes from social science or biomedicine so our fear is theoretical rather than raw. Social science is too weird to be sincerely nervous, and medicine too rich. But I detect a grain of unease. We have all seen portents.

At Iowa clever administrators have moved the language programs around, fusing them into the unwieldy “Division of World Languages, Literatures and Cultures.” At this point “Department of French and Italian” sounds almost musical. The university claims to have slashed $250,000 from the administrative budget with this move—that’s a lot of secretaries, for whom no one seems to be weeping. Creepy. Who will go next? The provosts have blood on their teeth; we picture them rolling their eyes in a lather, pacing the pretty lanes of the Pentacrest, sniffing the air for weakness and disease. We imagine the new Languages, Literatures and Cultures behemoth moving its slow thighs and practicing its blank and pitiless stare. Who might it eat? East Asian studies?

This is all just local color, of course. This kind of administrative chess gambit doesn’t provoke soul-searching like Albany’s more dramatic gesture. Stanley Fish, writing in blogs for The New York Times, has examined the Albany decision as an example of a long, slow assault on the humanities, and on universities in general. He concludes his most recent piece on the issue with a set of questions for policy makers:

Do you know what a university is, and if you don’t, don’t you think you should, since you’re making its funding decisions? Do you want a university—an institution that takes its place in a tradition dating back centuries—or do you want something else, a trade school perhaps? (Nothing wrong with that.) And if you do want a university, are you willing to pay for it, which means not confusing it with a profit center? And if you don’t want a university, will you fess up and tell the citizens of the state that you’re abandoning the academic enterprise, or will you keep on mouthing the pieties while withholding the funds?
Earlier Fish gave his own answer to the first question: universities exist to produce academic knowledge, which in the humanities might be something like a new approach to Hamlet. Although I basically agree with Fish I can see the tautology in the argument—if people (whether they’re student-customers or state legislatures) don’t see the value of this self-declared mission then they will certainly object to funding it with their tax dollars.

For Fish teaching comes second. He demonstrates this in an underdeveloped argument for cross-pollination in both professional scholarship and undergraduate education:

Instead ask what contribution can a knowledge of the Russian language and Russian culture make to our efforts in Far Eastern studies to understand what is going on in China and Japan (the answer is, a big contribution). Ask would it be helpful for students in chemistry to know French or students in architecture and engineering to know the classics (you bet it would). And as for the ins and outs of French theory—casually vilified by so many posters—don’t ask what does it do for the man in the street (precious little); ask if its insights and style of analysis can be applied to the history of science, to the puzzles of theoretical physics, to psychology’s analysis of the human subject. In short, justify yourselves to your colleagues, not to the hundreds of millions of Americans who know nothing of what you do and couldn’t care less and shouldn’t be expected to care; they have enough to worry about.
Fish’s logic here seems convoluted at best—universities should support humanities curricula because they promise an alchemical synthesis with “real” disciplines like politics, chemistry and engineering? Literature and social theory find their justifications in serendipitous connections with brawny disciplines that confront and subdue the real world? Students will somehow benefit from learning both the periodic table and The Canterbury Tales? I don’t buy it, and it makes a poor, secondary justification at any rate. Fish’s argument slipped his grasp here.

But humanities (and in many cases the social sciences) do two things that Fish represents, willy-nilly, in this weird paragraph. The most important thing that the humanities do is to train students to express themselves clearly in writing. Writing well supposedly serves real-world interests (like employment) but also, in an ideal sense, opens up a world of pleasurable self-expression.

George Orwell, in his “Politics and the English Language,” went so far as to argue that writing well prevents disorderly and cruel thinking and encourages clear, rational argumentation. I would emphasize this, were I defending a budget before a dean. Of course very few universities actually teach writing well. It’s one of the hardest things in the world to write clearly—look at Fish, a brilliant and powerful writer who nonetheless occasionally becomes mired in turgidity.

I mentioned two things, and here’s the second. Good humanities courses also expose students to radical difference. They confront students, especially Americans, with the fact that people who believe in the most infuriating and ridiculous things inhabit our world, and that these people often prove vexingly resistant to being told that they are infuriating and ridiculous.

In anthropology this is most of what we do, but the humanities go to the same well. A banal example: the social strata in which Jane Austen or Charles Dickens lived caused them to write characters who behave in baffling ways. For a modern reader puzzling out why it would be advantageous to own a prominent ash-heap or marry an effete horse-fancier becomes an exercise in imagining how things could be otherwise.

For the past two semesters I’ve taught students at the University of Iowa about (among other things) how Sudanese witchcraft beliefs relate to illness and misfortune. Most of these students grew up in Iowa, and some of them have never left the Midwest. They began my courses thinking of “African” witchdoctors as quaint, irrational practitioners of some nonspecific voodoo, gnarled old men who put curses on people and wore ridiculous outfits.

It pleased me to see these students come to grips with the logic of witchcraft. By the end of the course they could interpret their own misfortunes in the context of witchcraft. They could even identify areas where witchcraft might actually provide a more satisfying explanation than, say, a CAT scan. They were excited by the idea that things might be otherwise.

But of course I didn’t ask them to consult the poison oracle or to accuse their classmates of psychic malice. Nor did I require them to approve of or adore the logic of witchcraft. At its worst teaching about other cultures turns into numb and frantic political correctness, in which the mere stamp of foreignness confers an indelible, saintly aura upon any custom or belief, no matter how loathsome. This is not the point of an education that we might very cautiously call “multicultural.” A good multicultural education does not rest on a rote and meaningless promotion of universal tolerance.

The inter-subjective exercise of imagining oneself as a rational human being whose values differ from those of mainstream America is inherently useful, especially as the world globalizes. But it’s a process of thought, not a condescending stamp of Western approval on the quaint beliefs of savages. Learning to see things from the “native’s point of view” does not require unconditional love, but it does require thought. If we accept the pre-postmodern notion that public universities exist to educate the electorate then the responsible teaching of how “things might be otherwise” becomes critical.

Fish builds his argument more carefully and with vastly more attention to the currents of academic politics than I do but ultimately I think my two points are more persuasive. My own education leads me to see the university itself as a site of social reproduction in which the values of the middle class are continually re-affirmed and in which citizens of the plastic monster that is the post-modern state learn to bind their souls and minds with weighty yet invisible chains. But how can we see these chains, and how can we learn to exercise a certain jaded attitude, without our universities? We must suckle from these adders! As Deleuze wrote, “There is no need to fear or hope, but only to look for new weapons.”