What’s the Panic over Test Scores Really About?

Are our students failing tests, or are our tests failing students? 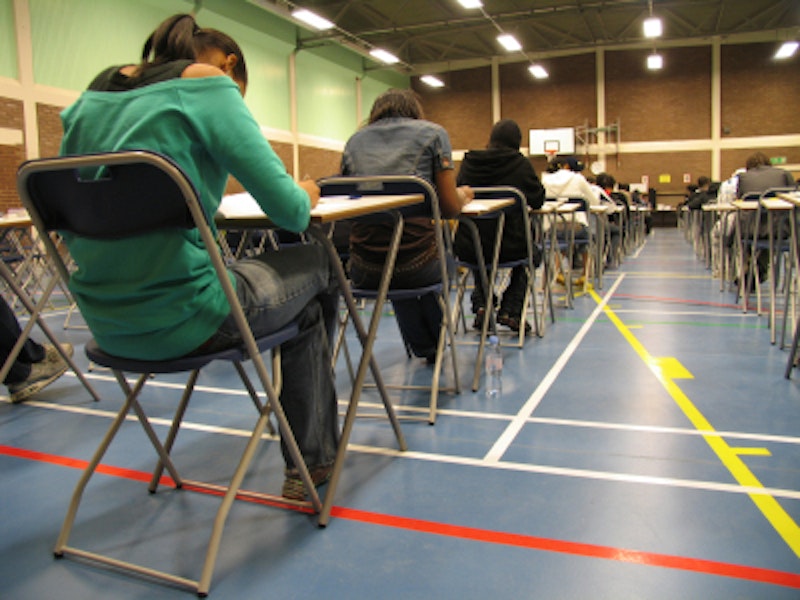 We’ve been hearing recently that American high school students don’t know much about US history. In June, The New York Times published a handful of history multiple choice questions beneath a careful, despairing warning that seniors in our public schools score extremely poorly. The headline asked, “Are you smarter than a 12th grader?” Here’s one of the questions:

“One of the important effects of the Second Great Awakening was:

A)   The weakening of the Methodist Protestant denomination.
B)   The growth of reform movements that addressed issues in many areas of United States society.
C)   A decrease in the participation of women and African-Americans in religious revivals.
D)   The unification of various Protestant denominations in Eastern states.”

It’s as if the figures of history have started forth from the page to march and caper before my very eyes! Like Emerson in the woods I feel my soul overflow my body and join the tidal thrum of the universe—I am one with the wise giants who rendered the brute facts of history down to careful formulations like “movements that addressed issues in many areas of United States society,”! I weep with the “women and African-Americans” as they stand shivering in the rain, the flaps of the Great Awakening’s tents closed to them! On the wings of Time I fly into the meetings of the “various Protestant denominations,” and like Augustine or Savonarola I join the theological debates, the fires of Puritanical zeal belching from my mouth, the smoke of piety rising from my ears!

Or not. Perhaps I am bored almost to tears by this bland, fussy question, and by the vapid minds that employ it as a gauge of “proficiency” in the understanding of US history. Only 12 percent of seniors can answer these questions correctly, the National Assessment of Educational Progress tells us; we are left to conclude that we will soon live in a country in which the young people believe that Lincoln was the first man to walk on the moon and that William Jennings Bryan was the lead singer of the rock band Creed. Or perhaps we should conclude that our high school seniors employ little guile when it comes to standardized tests—I don’t know the Great Awakening from the Bull Moose Party but I guessed the right answer because I know how these stupid questions work.

Anyway, the press appears to be working itself into a moral panic about our allegedly dim-witted high school seniors, who will surely end up working for Chinese or Indian high-school students who do know what the Bull Moose Party was. We accept as a given that it’s a very bad thing that our students can’t tell the difference between the first and second Great Awakenings, and that they may not understand the ineffable beauty of the Teapot Dome scandal. But the critics who lament this ignorance have been reticent to explain exactly why it’s so bad.

Rutgers history professor Jim Livingston wrote a lengthy, achingly highbrow blog post on why the panic over history is actually a class issue, and a failing of professional historians rather than high school students. The great intellectual and Timesman David Brooks put the bad scores in the context of tension between testing and teaching in an op-ed. He argues that really good schools produce better-rounded students and better test scores, a conclusion so shocking that it must have driven many of his readers to the point of waking.

The moralizing hysteria over scores distracts us from the real questions: what do American high schools teach about US history, why do they teach US history, and what do the tests test? The arid, fussy, condescending AP US history textbooks that I recall from high school certainly didn’t teach history in the way that university history courses do—they were broad, shallow, secondary, reductive and insipid. I learned more from Dave Barry Slept Here.

Decent academic history, unlike high school textbooks, is focused, deep, passionate, and theoretically engaged. So what do the tests, which rely on students full to the brim with the heady liquor of textbook scholarship, actually test? Memorization, the ability to reproduce pieces of knowledge in a particular persuasive idiom, as multiple choice or in the blandly responsible language of the five-paragraph essay.

So why are we teaching and testing US history? An astonishingly poorly written editorial from the Lexington Institute suggested that students (especially minorities) who don’t know history won’t understand their political and human rights under the Constitution (they also append a tiresome polemic against “radical” multiculturalism). In a spirit of vitriolic irony one might suggest that minority victims of structural violence who know their rights merely have more to be depressed about.

The Lexington editorial points to the most enduring argument in favor of strong education in US History: that it produces educated and effective citizens. The basic idea is that we learn history so that we may vote wisely.

The argument here turns on utilitarian relevance. Proponents of robust history education explain that US history is valuable because it is useful; it becomes a tool, like calculus or jazz dancing, that students can use in their lives. Knowing the major players in the Shay’s Rebellion, the argument goes, will somehow help American citizens to craft a government that is just, responsible, and humanist, and to lead lives filled with wealth, health and civic generosity. When faced with a decision, like whether they should take Michele Bachmann seriously or not, Americans should be able to think to themselves, “what would John Phillips Shay, who led a rebellion against the notorious poisoner ‘Dread’ Scott, do?” Knowledge becomes the inoffensive power to vote; it is important not as thought but as action.

I see this utilitarian conception of education more and more in public debates about the value of college. I find the insistence on usefulness troubling because it ignores the aesthetic and intellectual appeals of learning; it might simply be interesting to learn about Shay’s Rebellion, and a person who knows all about Shay’s Rebellion might possess a force or beauty greater than that of someone who is ignorant. I think this is an easier case to make than that historical knowledge will help you vote and work more effectively.

The idea of history education directed towards civic responsibility suffers other problems. The philosopher Michel Foucault described a process that he called “discipline,” in which societies concentrated their subjects in sites of cultural reproduction. He gives factories, work camps, hospitals and schools as examples. The disciplinary society, Foucault argued, creates docile and productive subjects, human beings who have “internalized the mechanism of repression” taught to them at sites of discipline. They have learned to be good citizens, to follow the rules of their society, and to act at all times as if they are observed by the repressive powers that shaped their citizen-subjectivity.

It’s not difficult to see US history education in this way, especially when it is imagined as training for voters. Even the current vogue for exposing the cruelty and venality of America’s past reproduces triumphal orthodoxies of American exceptionalism, and reinforces a naïve evolutionary perspective on American power and governance. My high school history education dealt frankly with the abuses of the Gilded Age and the genocidal policies of the US government during the westward expansion, but at the bottom of these sober correctives to American myth I still found the idea that America was steadily getting freer and better and that a neoliberal capitalist democracy was the inevitable destiny of every society around the globe—we used to be a bunch of assholes, but we’re very nice now, and getting nicer. Our nation’s hideous recent adventures in high finance and in the Middle East have disproved this particular idea.

We might argue that history education is discipline, but we certainly can’t argue that it’s effective. Despite the claims of political practicality 88 percent of the students clearly don’t find the material worth studying, perhaps because educators have not made it relevant, either to the students’ civic bildung or to anything else. If learning US History is so useful why do high school seniors reject it?

Irrelevance is only one of the problems here. The conventional AP US history approach to teaching also vastly overemphasizes content; the tests hew to a model of memorization that dates back to the pre-Enlightenment monasteries of Medieval Europe. The main purpose of education, in this conception, is to arm the students with a great arsenal of facts. You’ve got to remember what the Great Awakening was before you can decide what it meant.

The problem with this approach and the kind of teaching that it encourages is that our political economy of knowledge no longer rewards memorization. If I want to know what the Great Awakening is I just look it up on the Internet, and if I’m still interested after that I can find hundreds of peer-reviewed scholarly articles about it almost instantly. If we teach history to educate politically-engaged citizens then wouldn’t we be better off teaching them how to Google, and how to separate objective research from tendentious blather? Education has not caught up with how we reason and research in the information age; I’m reminded of teachers from my past who insisted on hand-written drafts of papers despite the fact that the students all typed faster than they wrote.

This is the central idiocy of the panic over history education: knowing many facts about US history doesn’t make you smart and it doesn’t necessarily teach you how to think or how to persuade. If a student doesn’t know who Lincoln is he can simply search for Lincoln on his cell phone; he cannot search for the ability to think or write.

Deep down, the panic over low test scores is aesthetic: we find something repulsive in the American ignoramus who doesn’t know who Thomas Jefferson was, and something ornamental and delightful in the citizen who can talk cogently on Lincoln’s cabinet. We may have to abandon these dainty prejudices. A while ago Stanley Fish wrote a blog post in which he argued that plagiarism should be understood as a violation of academic rules rather than a moral or ethical failing. We might apply the same interpretation here—is ignorance of history a moral failing, or a lapse in the duties of a good citizen? Or is it simply a sign of the irrelevance of the artificial rules of test-based education?