I don’t have time for your bullshit. 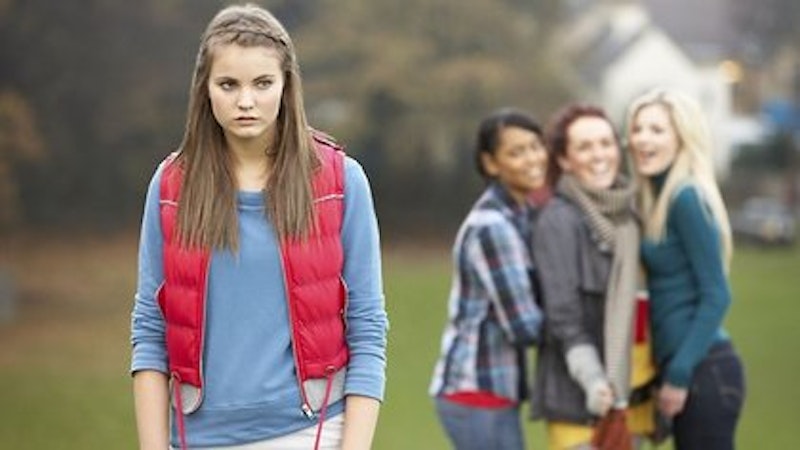 My daughter entered fifth grade this year. As near as I can determine having had two teenage girls survive their tweens, fifth grade is when girls go mean. (It used to be more like seventh grade, but the growth hormones in milk or something made it earlier). What this means is that I’ve been hearing about “the mean girls” in my daughter’s class since she before she even entered the building and the summer rumor mill spread the news.

When your kid is a baby, there is a guidebook for “What to Expect…” when you’re expecting, the toddler years and so on. There is no guidebook for “What To Expect: The Bitchy Hormonal Years.” This means you’re forced to navigate the murkiest of motherhood swamps on your own. Figure out for yourself whether you want to talk your girl about “body changes” before the school year’s main event: “the movie.” Fifth grade is the year they separate the girls from the boys and show the wear deodorant/get your period movie to girls and the… well, I don’t know what’s in the boy movie because my son is only in second grade. I guess it’s “So You Have a Boner” or something. Ick.

When I got the classroom form asking what my child’s educational strengths/weaknesses were, I noted simply under concerns: “the mean girls.” Needless to say, by this grade everyone knows who the mean girls are, and unfortunately my girl ended up with a bad mix of them. With my first two daughters, I used a defensive approach. I figured I couldn’t do anything to change the environment, so my job was to give my kids the skills they need to deal with the mean girls. I don’t drive my kids to school to avoid mean kids on the bus, because I won’t be able to drive them to work someday to avoid getting mugged on the subway. More life lessons are learned on the bus and playground than in the classroom. “There will always be bullies, how can we avoid them?” was kind of my strategy, since unfortunately “Punch them in their fucking faces” is considered poor child-rearing in polite circles. My daughters have had to deal with a few bullies. Normally, I would report the far-and-between incident to the school. I’ve had to intervene and call a parent once, and it didn’t go well. The thing about mean girls is that their moms a.) won’t ever believe their girl is a mean girl; plus, b.) how do you think the mean girl got that way in the first place?

So now I’m facing a school year of potential mean girl interactions and I’m not ready. My third daughter is a sweetheart: she’s like raising Snow White; she comes down in the morning singing while she fills the bird feeders (she’s on a birding team that won the youth division World Series of Birding). I fully expect woodland creatures to show up and make her prom dress someday. She has enormous blue eyes, not a mean bone in her body, and lots of friends at school. She is sensitive. She cannot handle the mean girls. Mean girls know this: they can sniff out the weak ones in the herd. She doesn’t play sports, she isn’t wearing what they’ve decided are the right clothes; they’ll think of a way to make her cry.

I will fly into mamma bear mode in a heartbeat for this one. Ten years ago, on St. Patrick’s Day, she was born completely blue and not breathing, and I will never forget watching the doctors huddle around her, working on her until the pink started at her heart and spread to her limbs. The pink has never stopped pouring from her, and I will not watch those evil little bitches stop it and make her bitter and jaded.

We’ve been talking about ignoring them, etc., but the first day she comes home in tears, and I know it is only a matter of time, I will fly my broomstick over to that school and face her teacher (only in his second year, God help him) and I’ll do whatever I need to do to make it stop. If moving her seat works, fine. If talking to the girls works, great. But if she comes home with tears in those blue eyes a third time, I will pull her out of that classroom and we leave those little brats behind before I show up on the recess blacktop and deal with them myself, old-school Philly-style, and end up in an orange jumpsuit.