You need to care about the first to improve the second. 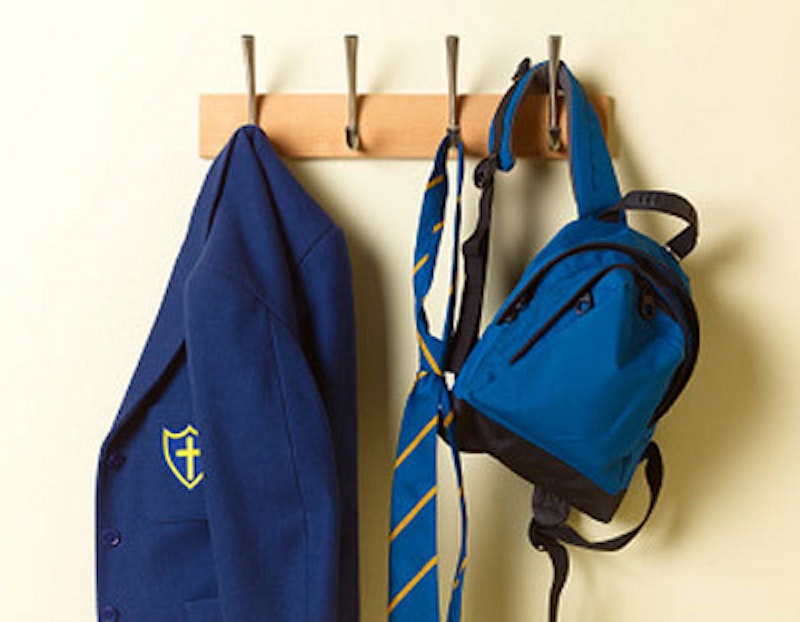 I send my son to a private Waldorf school. This makes me one of the bad parents Allison Benedikt singled out in a controversial post at Slate recently, in which she excoriated (and/or trolled, as Mary McCarthy said) parents of private school kids. According to Benedikt, "[I]f every single parent sent every single child to public school, public schools would improve." Therefore, folks like me are morally evil for sending our kids to a private school and beggaring our neighbors. Benedikt thinks that my kid would probably get a worse education at a public school. However, she tells me:

You want the best for your child, but your child doesn’t need it. If you can afford private school (even if affording means scrimping and saving, or taking out loans), chances are that your spawn will be perfectly fine at a crappy public school. She will have support at home (that’s you!) and all the advantages that go along with being a person whose family can pay for and cares about superior education—the exact kind of family that can help your crappy public school become less crappy. She may not learn as much or be as challenged, but take a deep breath and live with that.

The worst that will happen to my child, Benedikt insists, is that he won't know poetry or the dates of the Civil War. He'll just have fun drinking before football games rather than having fun learning about komodo dragons or drawing. And maybe all of that's true. Maybe I'm hurting the public schools by not sending my son there, and maybe it's all for nothing, since he'd be just as happy filling in test bubbles as he is knitting. But I couldn't help thinking of Benedikt's proscriptions when I read Emily Yoffe's most recent advice column. Yoffe's interlocutor is a member of a religious minority living in the Deep South. The community, and therefore the public school, is deeply Christian, and the separation of Church and State appears to be honored entirely in the breach. There are school-sponsored Bible studies; the choir concert includes little but Christmas songs. And—the one that really matters—the woman's middle-school aged daughter is frequently told by peers that she is going to hell.

Yost's response was long on sympathy and short on actual practical advice.

Being in middle school is for many kids a kind of torture at best, and being told you're going to hell must only add to the fun. But unless your daughter finds her treatment intolerable, you have to help give her some tools to deal with this: "Thanks for thinking about my soul. But my family is happy to be Jewish/Muslim/Hindu.”

Which rather begs the question: what if her daughter does in fact find the treatment intolerable? What do you do then? Benedikt would probably say that the mother should confront the school, and insist that they stop with the Bible studies and that they prevent the harassment. This is, in fact, Benedikt's central argument; active parents need to direct their energy not towards building up some happy Waldorf community, but rather towards improving their local public schools. They should be, as Kim Brooks wrote at Salon, "super-parents who, through tireless volunteering and organizing and advocacy, turned our neighborhood school around." By this reasoning, the questioner here needs to march up to the overly evangelical administration and start doing some transforming.

Brooks, who sends her kids to private school, admitted, with much guilt, that super-parenting wasn't something she could face. For her part, Yost is savvy enough to realize that, for the non-Christian mother, super-parenting could make matters worse, not better. "[B]ringing a complaint," she acknowledges, "might not do much except make school more unpleasant for your kids." And, indeed, schools are often bad at dealing with bullying, especially when the bullying is directed at people who are seen as outsiders by the adults as well as the children. Among the kids profiled in the film Bully, for example, is one girl named Kelby, who is a lesbian. For a while she stays in school because she wants to try to change people's attitudes towards gay people. Eventually, though, her parents, who are afraid for her safety and her mental health, pull her out. By Benedikt's reasoning, that makes them bad people. After all, if your kid isn't in public school, you're part of the problem.

I'm sure Benedikt does not intend to morally condemn the parents of bullied queer youth for trying to prevent their children from killing themselves. And, of course, the young girl whose peers keep telling her she's going to hell may well not be in as dangerous a situation as Kelby. And my son almost certainly wouldn't be in as bad a situation as either if he went to our local public school here in Chicago.

Still, the point is that if you place your moral duty to society over your moral duty to the person in front of you, you can end up with some fairly monstrous conclusions. Benedikt had an okay time in public school experience. So did I, despite some unpleasant brushes with bullying. For that matter, I have friends who did better in public school than in private. But still, some kids who go to public school don't have okay experiences. And if that kid is yours, are you really supposed to tell them that they need to stay in school for the good of the school system as a whole? Do they just have to take it until it becomes "intolerable"—at which point we can give them no advice and no options?

It's true, and tragic, that many people don't have options. But in some cases, at least, the problem is as much a lack of knowledge as a lack of funds. I wish Yoffe had told that family that there are a lot of affordable distance-learning options these days. They might not have wanted to pull their daughter out of school, and she might not have wanted to go. But just knowing that there's an escape hatch if things do become impossible can sometimes make the day-to-day grind a lot more bearable.

Public schools need more money and more resources. But I don't see how we get them those resources if we don't care about kids. If what happens in school doesn't matter, if learning doesn't matter, if we've convinced ourselves that kids are going to be all right no matter what, then where's the incentive to improve things? And if we've decided that the child must stay in that building for the good of society, then what difference is there, finally, between school and prison?