Your iPod Kung-Fu Is Weak

Isn't there a weird kind of loneliness associated with iPods? Headphone wearing souls can seem so isolated in public. Now kids are figuring out how to make everyone's favorite MP3 player more sociable: iPod battles. 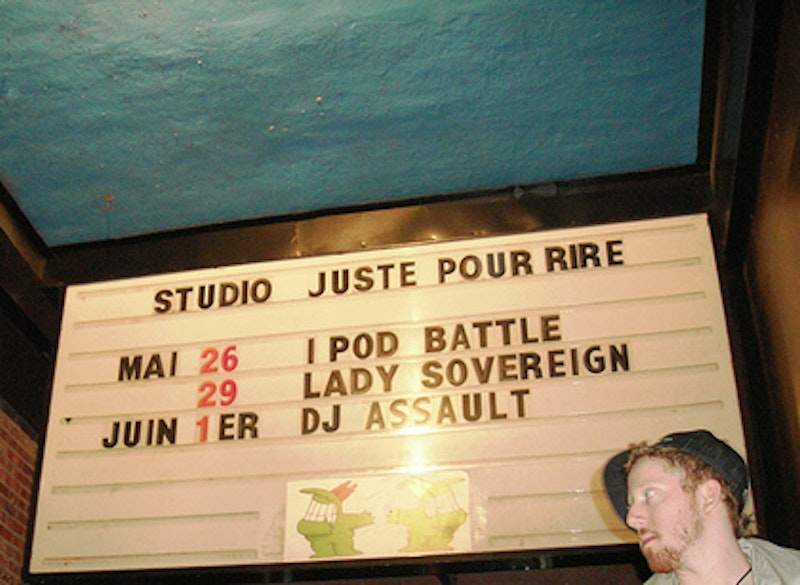 "I enter the boxing ring, sporting a New Kids on the Block style outfit, with my partner in crime at my side. With iPods in both hands and a pink boa around her neck, she looks up at me. I nod my head. Let the battle begin.

Last semester, I took part in a strange cultural phenomenon called an iPod battle. The concept is unusual, but the outcome is surprisingly invigorating. All you need is an MP3 player, a boxing ring, some good speakers, an applause meter and most importantly, a crowd ready to cheer and dance to great music.

iPod battles pit teams of two against each other in a boxing ring, ready to combat with killer songs from their playlists. Tracks are played for 60 to 90 seconds at a time. After each round, a Master of Ceremonies measures applause and cheers from the crowd. Eight teams in all compete, and after three rounds, the two remaining teams face-off in a final music-geek-death-match.

The concept was brought to Montreal by fluke two years ago. Jonathan Maurice was in France when he went to a Parisian iPod battle out of curiosity. It was Teki Latex, member of the French hip-hop group TTC who envisioned this new type of music competition.