Wimping Out at a No Age Show at Baltimore's Floristree

You’ll get no power from me. 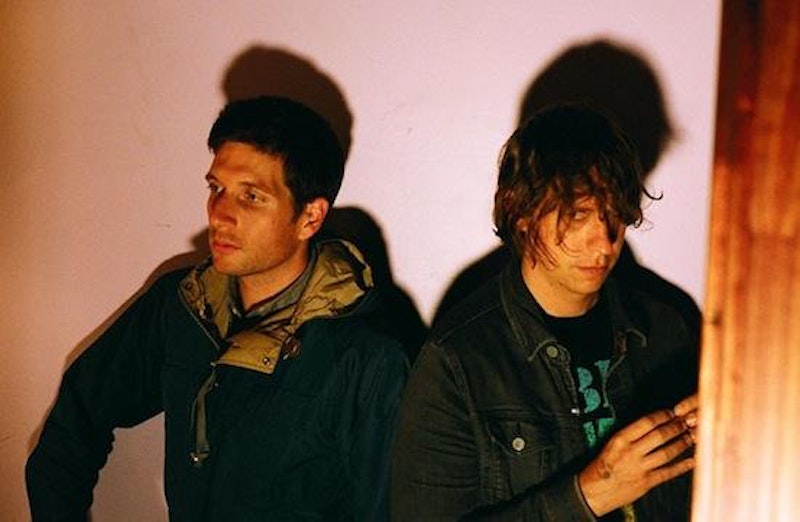 I was really excited to see No Age, Roomrunner, and Oh Hang (featuring members of Thank You and Oxes) play at Baltimore’s Floristree two days ago, despite an equally essential bill happening simultaneously at the Metro Gallery—Wolf Eyes, Horse Lords, and Twig Harper, which was packed, and apparently devastating, the “show of the year.” The vibe at Floristree was more muted, and I was bummed: I just missed Oh Hang, which I think went undocumented. The crowd was thin and mostly stationary, some unfamiliar faces seeming especially listless. Besides a handful of guys eager to bash into each other before Roomrunner’s guitars were plugged in, the manic energy of the last time No Age played here in 2008 was somewhere else.

Like many, I hadn’t been to Floristree in several months, and in the meantime the walls have been whitewashed; grody and non-grody furniture has all been dumped; and yes, you can no longer smoke there. It’s the biggest changes in a space that’s remained remarkably similar and consistent in the last seven years, but obviously any effort to keep the space alive is worth it, even smoking in the cacophonous, chimney-like stairwell with 30 or 40 other people. Still, it was bittersweet seeing this cleared-out version of a space that once felt like the world’s coolest treehouse, on a night when it was clear most people weren’t that excited, for whatever reason.

Roomrunner was great as always, loud as ever, but with all the junk and debris cleared out of the room, everything sounded more “pressurized.” When No Age started churning with “Circling with Dizzy,” I effortlessly walked to the very front, in a crowd of maybe 60. “Dizzy” isn’t an obvious opener, wedged in the middle of side two on their excellent new record An Object. The sort of song you play to rev up or get people the fuck out of the stairwell. In any case, what I saw of No Age’s set on Wednesday was far and away the most painfully loud show experience I’ve ever had. Without earplugs, I enjoyed “C’mon Stimmung” with my fingers in my ears. Even then, the clarion call pitch-damaged sample that propels the song’s chorus into outer space was there, but harshly buried, indecipherable unless you knew it was there.

My whole head was vibrating, I could feel my ear drums practically palpitating, I thought of Pete Townshend, and Jason DiEmilio, and quickly escaped to the stairwell, where I remained for the rest of their set, complaining to my friends about the violent volume while wistfully listening for snatches of favorites like “I Won’t Be Your Generator,” “Brain Burner,” “Boy Void,” “Lock Box,” and “No Ground,” which still sounded volcanic and physically un-endurable in the stairs. In a big empty room like that with a small crowd, Randy Randall’s wall of amps felt like being inside a jet engine. It bothers me when some bands insist on loudness for loudness’ sake, covering up poor songwriting or playing at a hostile volume, but the next morning, I realized that wasn’t the case with No Age at all. The guitar tones and loops and deconstructed bits of sound on An Object sound the way they do—molten—due in large part to that heinous set-up. Even on an off night, Randall and Spunt, who plays drums now with even more of an effortless and playful elasticity, smiling wide, give off such positivity and the relentless optimism and dedication you need to be a rock band these days with any sense of ethics. They won’t be “graduating” to a proper club any time soon: Floristree is where No Age belongs.