A Battle for R&B's Future 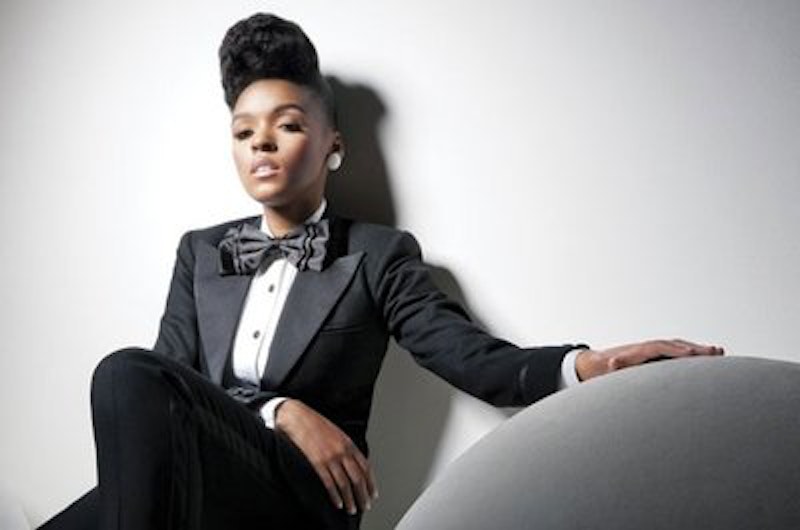 This week brings two new salvoes in the struggle over R&B’s future, both sidestepping the prevailing hip-hop flavored sound of the moment. Janelle Monae’s second album, The Electric Lady, enters into the fray with force and fanfare, as Monae (pictured) marshals a traditional group of singers and a classically-minded sound to state a case for building the genre around its pre-hip-hop pillars. The Weeknd’s Kiss Land offers something else completely—something that largely disregards both R&B’s past and hip-hop’s drive.

Monae’s “We Were Rock & Roll,” is a fast-moving piece of funk that builds to a shout-to-the-skies chorus: “We were unbreakable/we were like rock & roll/we were like the king and queen/I want you to know/no matter how the stories told/ we were like rock and roll.” Ostensibly a reminiscence about a lover from the past—“we were 21/ we thought we owned the sun”— it sounds more like Monae’s plea from R&B to rock. She’s glorifying the good old days, before hip-hop became the most vital sound in pop and stole R&B’s crown.

Team Monae wants to evoke those days, to trigger memories with the sheer weight of their musical references. The Electric Lady is hefty, with 19 album tracks, five high-powered guests, four bonus songs, three interludes, and two “Suite Electric Overtures.” Monae’s collaborators include Erykah Badu, the queen of neo-soul, Solange, who has reinvented herself by mining the shimmer of post-disco 80s R&B, and Miguel, who guns for the rockstar-friendly, stadium-guitar R&B that took root in the 80s when Michael Jackson and Prince topped the charts.

Monae is a black pop synthesist. “Give ‘Em What They Love” features sharp exhalations of “ooh” like those on Sam Cooke’s “Back On The Chain Gang,” and the wah-wah funk and Monae’s vocals in “It’s Code” brings to mind the Jackson 5. “Ghetto Woman” accurately nails the color and sound of early 70s synthesizers, while “Sally Ride” grabs the end of Wilson Pickett’s famous exhortation. Monae doesn’t ignore newer stuff: it’s impossible not to hear the cadence of Outkast in the rapping on “The Electric Lady” (Big Boi, an early Monae fan, also worked on the album), and the horn part on “Q.U.E.E.N.” would have felt at home on any neo-soul record from 2000. The album also pulls from campy musical traditions outside of the temples of soul, funk, and rap. The opener cranks early 60s sounding guitar and ends with a coda that might have appeared in a 60s movie. “Look Into My Eyes,” an over-the-top, vaguely-Latin ballad, could be a Bond theme song.

Prince is also important here—the one musical guest unlike the others, because he looms larger in musical history (though all Prince collaborations must be forever compared to his 1987 duet with Madonna, “Love Song”). While he’s only heard on “Give ‘Em What They Love,” Prince’s unique sounds and carefully cultivated brand of weirdness inspire all that Monae does. The album’s single, “Q.U.E.E.N.”, showcases vintage Prince synthesizer work, and “Dance Apocalyptic” honors him both with its thwacking rockabilly swing and its central conceit: escaping—or causing—cosmic disaster by partying the night away. The repeated appearance of a character named Cindi Mayweather is also a nod toward Prince’s playbook, and unsurprisingly, Prince is a fan of Mayweather, recently tweeting “iF U hAVE aNY IN4MAtION rEGARDiNG tHE wHERABOUTS OF CINDY...hOLLa!”

You could say Prince also influences the Weeknd’s Kiss Land, which comes out the same day as The Electric Lady, but a different part of Prince’s DNA has filtered down to the Weeknd’s Abel Tesfaye: the paranoid, somewhat menacing synth-scapes from 1999, and Prince’s pairing of layered falsetto and cold electronic textures on Sign O’ The Times. The Weeknd also favors an R. Kelly-style speak-sing at times. But while both Prince and R. Kelly maintain connections in their work to classic soul and funk, whether it’s Prince’s zen for Parliament or Kelly’s affinity for Teddy Pendergrass, the Weeknd has shown little or no affinity for pre-electronic black pop since his first releases in 2011. Tesfaye may sing in falsetto, but he is rarely interested in R&B’s two traditional poles, instigating movement or tracing a dramatic balladic arc.

All those genre staples beloved by Monae—chickenscratch guitars, snappy beats, horn sections, warmth—are absent on Kiss Land. In their place are drums programmed to sound thin and hollow, conveying a permanent state of edginess, but not the chattering drive common to today’s hip-hop beats. (Tesfaye has worked with the rapper/singer Drake in the past, and he shows up in “Live For,” but he delivers one of his weakest guest verses in recent memory; the energy required to rap makes the activity seem instantly out of place on the album.) The electronics drift and jab without a gleam of sunshine. There are clicks and clanks that wouldn’t be out of place in a suspense movie’s chase scene, or on a spaceship. Guitars often play a massive chord and leave it hanging to shrivel slowly behind the scenes. When Tesfaye collaborates with Kavinsky, who makes dark electronic pop, for a track, the transition between their sounds is seamless.

And while Prince and R. Kelly are walking, singing advertisements for the joys of sexual entanglement, Tesfaye doesn’t care for palaces of pleasure. The sex that litters Kiss Land isn’t about enjoyment; it’s a compulsion, an irresistible drug, a tool for manipulation. Pick a line. From “Adaptation:” “I lay my head on 1000 beds/it’s been a chance to see how far a man can go without himself.” From “Love In The Sky:” “… I’m always in a rush ain’t no time to fuck slow/and even if I try it’s not something I would know.” “The Town” creates a more violent brand of sexuality: “now I hear that you’re single/I’ll give you something to live for.” Tesfaye gets his thrills from the transactions that relate to sex, not the act itself. In “Belong To The World,” he finds connection with a prostitute: “I know you want your money/cause you do this every day… It’s something I relate to.” And the title track finds him singing “you can meet me in the room but the kisses aren’t free/you got to pay with your body,” each line ending with a sampled scream.

A few songs try a different tone. “Wanderlust” could be from an 80s Jam & Lewis album or an early Madonna record, all synth percolation and flat thwack. This is likely a concession to radio; it sounds like it was made to slot in right after Drake’s straight-out-of-1984 single, “Hold On We’re Going Home.” And “Tears In The Rain” also works more conventionally, employing a repeated piano motif, a hammering beat, and a big chorus. But this sort of stuff isn’t really Tesfaye’s game. “I’m not a fool,” he assures the listener during “Belong To The World,” “I’m just lifeless too.” “Lifeless” doesn’t leave much room for big beats and bursts of pop or R&B energy.

Monae repeatedly thanks listeners on “Dance Apocalyptic” “for dancing to the end,” which she equates with being unafraid and willing “to break out.” Dancers are a notoriously fickle bunch though, they might be moving to Monae’s music one moment, but they’ll dance with just as much vigor to a more modern R&B track that plays next. It’s unlikely they’ll be dancing in the Weeknd’s corner; Tesfaye doesn’t have time for—or interest in—dancing, it’s too pedestrian, or it involves too much fun. R&B’s goal may be to reinstate itself as the dominant form of black pop. But hip-hop can rest easy for a little while longer.