It Definitely Gives Off A Screaming Sort of Sound 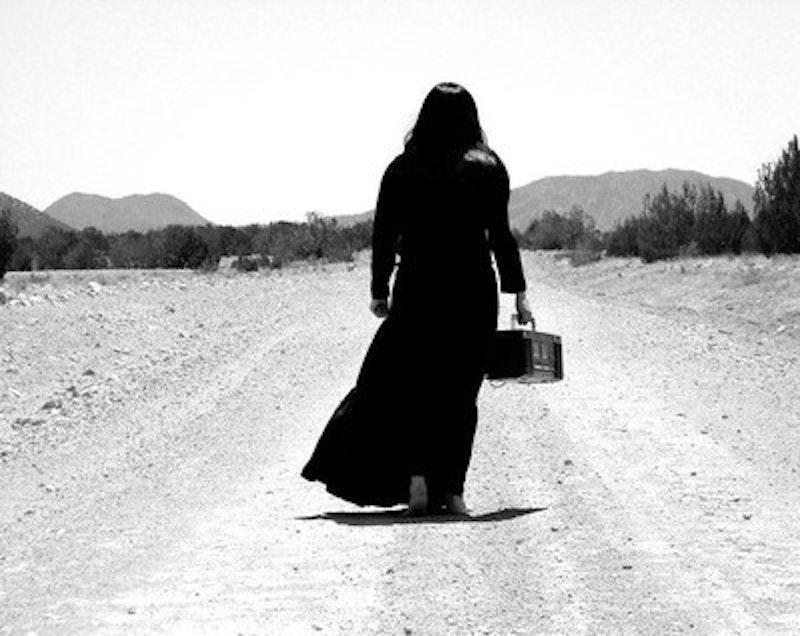 The noise of Tahnee Udero is something you feel in your intestines; it's earthy, shuddering, twitchy. It's the sound of metal detectors scouring layers of irradiated sediment for coins and shrapnel, of thunderstorms in Jupiter's atmosphere, of a dull blade dragged over the surface of a pulsating sheet of aluminum—a sort of tamped-down, consumed-from-within malevolence. New cassette Xila (Sick Sick Sick Distro) offers a potent, concentrated dose of this aesthetic, which marries the furious, fractal infinity of shortwave burr with black metal's dull roar. Sometimes the intensity here is nothing short of suffocating ("Badlands Walk"). At other moments, as on "Year of the Fire," Udero somehow evokes the whine of an F-10 preparing for take off while creating an illusion of sonic spaciousness. There's something distinctly and magnetically anti-temporal about Xila and Udero's burgeoning discography as a whole—a welcome, wholesale elimination of sense and place. Splice Today recently interviewed Udero via email about Xila and how she transitioned from DJing into noise.

SPLICE TODAY: There's a really evocative photo on the cover of Xila: a woman in a serape and a dress, carrying a boombox out into the scrub. Can you tell me a bit about this image, and why you chose it?

TAHNEE UDERO: It's my interpretation of "Mujer Angel" by Graciela Iturbide. Her photograph is of a Seri Indian woman walking in the Sonoran Desert, Mexico, with a boombox in her hand. I drew a lot of inspiration and vision from it. The combination of her look, the landscape (which looks a lot like NM), and a modern boombox is intriguing. It made me want to be like her, to put myself in her place.

I came across the photograph around the time I created my noise persona, la curandera. I was minimalizing the equipment I use to produce noise, experimenting. I was using a pzm (pressure zone microphone) to create feedback and wanted to create a set around that. But I wanted to disguise the microphone in some way. To change the feedback sound, I was moving the mic around, waving it. It made me think of curanderismo rituals. I got the idea to cover the mic with foliage that looked similar to herbs and something a curandera might use.

At about that time, I was going to be performing at a Halloween show and needed a costume. I decided to be a curandera with a darker quality, and dress similar to the woman in "Mujer Angel." I also wanted to age myself with make-up to look as old as I possibly could because my birthday was the same weekend. Along with a rug, a bunch of candles, and my covered mic, I created noise as la curandera.

I would have liked to use "Mujer Angel" as the cover, but I was urged to do my own interpretation. La curandera looks similar, and I often use boomboxes and tape in my sets. I asked a friend to be my photographer and take a drive outside Albuquerque, along the Turquoise Trail. We found two good locations, those shots became the front and the back tape cover.

ST: It's a very powerful, poetic image; it suits the accompanying sound quite well—and communicates to the listener that this is the beginning of a journey, into unfamiliar territory.

TU: Thank you for the compliment. That means a lot, and makes me happy my vision came together well. I appreciate those special details in the work other artists put out; I wanted to have that too. To make it feel like a keepsake.

ST: What led up to you moving away from the "la curandera" persona and to begin performing and recording as "TAHNZZ"? Is there a sonic difference between the two guises?

TU: La curandera is a persona of TAHNZZ. I took on that persona and have performed as her for TAHNZZ sets a few times. I don't want to perform as her exclusively. I will again when I have a specific idea for her next appearance. I like to change up my noise production regularly, so I would want something more or other than the microphone for her performance.

ST: What was your first experience with noise like?

TU: My first experience with noise was at underground DIY space called 1Kind. They had an amazing run of shows while they were around (2009/2010), and hosted quite a few noise artists. These types of spaces can have short life spans, but are a significant part of the music scene here, especially for experimental music.

To be honest, I didn't like noise at all at first. I was confused and annoyed by it; it just felt pretentious. That bothered me, since I considered myself an open-minded music fan and DJ, so I decided I needed to learn more about it and how the genre came into being. As I continued to research and go to noise shows, something clicked. I began to appreciate it, and the creativity involved. Creativity with noise feels boundless—a way to think of sound and how to create it in a totally different way then I was used to. There are no expectations of what it should sound like or needs to sound like. It started to feel like something I could do, a great learning opportunity and outlet for me.

I'm glad the DIY scene was my initial exposure to noise and not through academic channels; DIY is where I want my noise to stay rooted.

ST: That happens to a lot of people, I think. Noise sneaks up on you. Probably four or five years passed between when I heard my first noise promo and the moment where I was like, "Yes, this feels intrinsically right to me." And that's the key thing, the feeling, and the freedom of it—even as a listener that's an amazing thing.

TU: I think that freedom is a perfect word to describe noise. It feels like the definition of noise, essentially. It continues to amaze me that I can approach something knowing that I have freedom, and that accidents and imperfection are integral. That's just not the case for most other things in life.

ST: Xila might be the most elaborately yet sensibly packaged noise cassette I've ever received; the bag is beautiful, kind of mystical, with the turquoise beaded drawstring. It reminds me of when I was a kid and I'd go shopping for polished crystals with my mother, and a little drawstring sack would come with them. The presentation sort of communicates to the listener that this is something special, something precious, to be handled carefully.

TU: It's a bag that the woman on the cover would carry with her. To put something small she needs to keep close while she makes her way to her next destination, and the stamp reminds her to play it. The beads were added to cover up a mistake, which I ended up liking and adding it to all of them.

ST: One of the things I enjoy about Xila is how matte black it sounds, sonically, but in a way that feels organic and artificial at the same time. Like "In Front of the End People"—it sounds like a recording of a very intense electrical storm, but a very intense electrical storm that's taking place inside of a metal filing cabinet within a Quonset hut. There's a self-contained thing that seems to occur in your tracks, like in "Come to Pass," which isn't on this cassette; they're terrestrial but in their realm there's a lot going on there. How do you go about achieving your sounds?

TU: Part of my process is layering sounds and sound sources. I use whatever sounds I've recently come across that are interesting or unique. Then I build loose parameters for each session and just go with it. I like to put it all together and see where it goes, to the point where it becomes something unexpected. It feels like the electronics sort of take over, and you oversee it, and guide it.

ST: Tell me a bit about the Animas Transmission series that's up on your Soundcloud. Those tracks somehow seem more intense, more bloodthirsty, than some of the other material, and I keep thinking I'm hearing voices under the noise.

TU: The Animas Transmission series is four short segments. It was inspired by incompleteness and intermittent windows of transmission. Animas means departed souls. I wanted the pieces to be short random transmissions on their radio channel. I slightly tuned and manipulated the antenna of an AM radio underneath some of the pieces.

ST: Some noise artists side-step the titling of songs; you don't. How important or significant is titling for you?

TU: I want to choose titles that convey a little meaning or imagery. I want the titles to be a slight reference point. A lot of times I get inspiration for names from a book I have about New Mexico places and names. I enjoy learning about the meaning and origin of the unique names here, it's very much a bilingual state.

ST: "Hacheta" makes me think that your electronics are screaming.

TU: Part of what you might be hearing in "Hacheta" is the amplification of a mini-amp I built with a contact mic. It definitely gives off a screaming sort of sound.

ST: What is the New Mexico noise scene like? For some reason I don't hear much about it.

TU: The noise scene isn't huge but it's been steadily growing, in part due to Sicksicksick Distro and Raven Chacon. There is a range, from minimal and ambient to harsh and industrial. It has a doing a lot with a little aesthetic.

ST: When you first started DJing, pre-noise, what kind of material were you spinning?

TU: I was playing quite a bit more hip-hop back then. When searching for music, my focus was somewhat narrow in comparison, especially when digging for records. That's what got me into DJ-ing, hip-hop and samples. I slowly moved away from it and into other genres like soul, funk, disco, and post-punk. That was already naturally happening before I began playing noise, but noise did expand it even more. Now I have to go through every shitty pile of records because that's likely where the interesting and weird ones will be.

ST: That makes me think of Maria Chavez and her vinyl-destruction sound explorations, where any and all records become fuel for the fire. Have you ever heard her material?

TU: Yes, I'm a fan of her work. I discovered her at the end of last year. We were both on the line-up at Ende Tymes Fest this year; that was great. I own her book Of Technique: Chance Procedures on Turntable. Maria Chavez is a favorite noise artist of mine, along with Kevin Shields (Eva Aguila), and Marlo Eggplant.

ST: What do you do for a living, or vocation?

TU: I do administrative and operations work at a Trust Company; I mainly fill in where help is needed. It's a very flexible job, one where I choose which days of each week I work. Having the time available to volunteer at the radio station and work on noise and other projects is important to me. I'm fortunate to be able to do it.