Who's Responsible For Cassie's Albums? 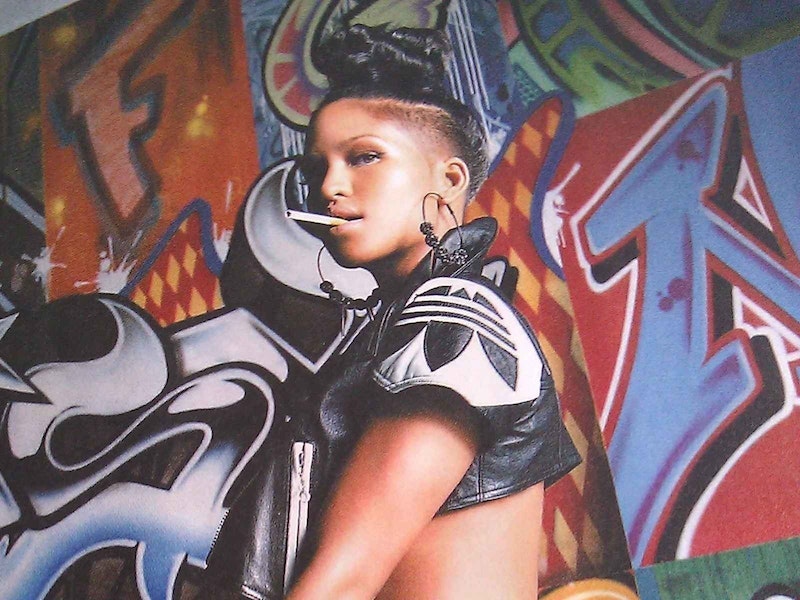 There is no auteur in pop. No one knows who is actually behind Miley Cyrus' image transformation from good girl to twerking, tongue-wagging bad girl, mainly because why would anyone bother to care? It's not like Miley is an artistic genius; whoever was responsible is just a hack. Miley told songwriter Timothy and Theron Thomas, "I want urban, I just want something that just feels black," and they and her producers took those vague, racist instructions and put together indifferent material for her to perform badly. It seems too kind to refer to her role even as inspiration in such a case. Rather, she comes across as a combination figurehead and kibitzer, a prop standing and whining in the middle of the factory while all her employees scurry about carefully ignoring her.

Cassie, too, seems to fit into that niche of artist as irrelevant effect. Her 2006 self-titled debut has her name on it, but that only emphasizes the extent to which it's not about her. The first word of the first song, the massive hit "Me & U," is Cassie provocatively wrapping her little girl voice around the name of the production company, NextSelection, with producer Ryan Leslie adding gratuitous echoes. And that's the album; Cassie's thin, processed voice becomes just another effect in Leslie's towering arsenal of sugar. The whole effort has the cloying, exhilarating effervescence of ABBA, coupled with a smirking horniness. When Cassie famously coos, "I promise to love you all the way down," the oral sex reference sounds like a kids' ditty. On "Just One Nite," the faux-sophisticated electronically simulated guitar strum fits neatly into Cassie's straining multi-track vocals; it's a masterpiece of coy ersatz longing, the message ("I miss the way we made love") virtually disappearing into the bloop und drung. "Miss Your Touch" sounds like Phil Collins, with Cassie's anonymous vocals somehow giving Leslie's deliberately faceless funk a blow-up robot personality that Collins himself never managed.

Cassie, in short, is a triumph of calculated radio street saccharine, ridiculously, smugly irresistible. But it doesn't feel like Cassie's triumph. Leslie's "Ooh Aah," works much the same way as Cassie's album; the substitution of Danity Kane for Cassie is a technicality, not a substantive difference. And, indeed, after breaking up with Leslie, Cassie has struggled to distinguish herself from all the other R&B divas. Various singles have gone nowhere, and her follow-up album has been terminally stalled.

Finally, in 2013, with the album still somewhere on the horizon, Cassie released a free mix-tape, RockaByeBaby. It sounds nothing like her debut. Gone is the inspired audio mugging, replaced with a bass heavy, ominous throb. Practically every track includes guest rappers and flat out filth ("Do my dance on your dick/ooh you know you love that shit" is a representative couplet), rather than Leslie's cutesy single-entendres. Where Leslie made Cassie's sweet, thin singing into another of his sweet, thin effects, the producers here let her flatness sit on top of the throbbing bottom; instead of naïve, she sounds distant and drugged out. On "Numb," produced by Noel Cadastre and Jordan J. Sirhan she repeats, "I'll make music to numb your brain," in a laid back drone, the beats stuttering and slowing down behind her while her vocals stutter too; Rick Ross' verse seems almost too animated in comparison, his personality makes him superfluous. On "Addiction," Cassie runs through her opening vocals hurriedly, making her sound desperate against the slow burping throb. "Heroin and cocaine, I know you're not good for me," she says, the production making her sound like she's singing in another room, weird and distanced. And then there's "Bad Bitches" with producer Aubry Delaine looping tough rock guitar and Cassie and Ester Dean trading rap verses about the joys of making money via sex work.

If you needed any confirmation that Cassie's musical personality is largely dependent on whatever producer she happens to be with, RockaByeBaby provides it. And yet, Cassie's two albums, seven years apart and with two thoroughly different sounds, do have one thing in common. They're both great. Maybe it's just an accident, I guess—but most artists don't ever make one worthwhile album, much less two strikingly different ones. It's hard not to come to the conclusion that, somewhere down there under all the production, Cassie's that thing that's not supposed to exist in pop (or at least not in pop made by female models)—an artist responsible for her own music.