Critics Still Unsure If It's Cool to Like Vampire Weekend

Too much agonizing: this is a band at its peak. 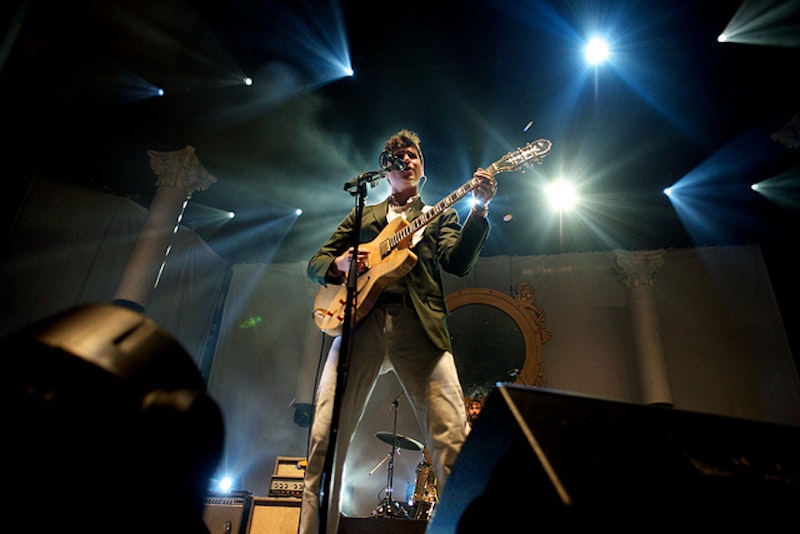 Vampire Weekend’s show at Brooklyn’s Barclays Center last Friday was their first headlining arena gig, but it’s a band at the peak of their powers: finally with a catalogue, not yet 30, well-oiled and ready to rock your local Enormodome after five years of festivals and theaters, beefing up their tight, spare, potentially fragile songs for bigger rooms and crowds. Arguably they made the transition years ago, but with three equally loved and acclaimed albums to make a set from, they can keep a room full of otherwise easily distractible individuals wrapped in a warm embrace, eyes glued to the stage, decorated in glorious floral print and suspended, Spinal Tap-size Roman columns. From their triumphant and blaring horn intro—like walking into Brooks’ Brothers Camelot depot—to “Walcott”’s final chord, Vampire Weekend had the capacity crowd wrapped around its fingers.

Without a word, they ripped into “Cousins,” playing manically and loose, flubbing a few of the first chords. Besides lead singer/guitarist Ezra Koenig missing his cue at the beginning of “Diane Young,” these were the only pockmarks on a stellar big deal rock show for a band that was begging to play in candy stores and dorm halls just seven years ago. With eight songs from their latest Modern Vampires of the City, and six from both their self-titled debut and Contra, there were no lulls, no lapses in attention from the rapt arena, because even their deep cuts—“Campus,” “Blake’s Got a New Face,” “Horchata,” “Everlasting Arms,” “Ya Hey”—are hits, and get just about the same fervent recognition applause as their pop monoliths “A-Punk” and “Cape Cod Kwassa Kwassa.”

Koenig is much more sly and subversive than most have picked up on: “White Sky,” another red-letter song, is a thinly-veiled ode to cocaine (“You’ve waited since lunch/It all comes at once” “A modern piece of glasswork/a pair of mirrors that are facing one another” “The elderly salesclerk won’t ask with suspicion/the whole immortal corporation’s given its permission”) disguised as an innocent piece of pop euphoria, with its ecstatic and wordless chorus of birdlike “ooooweeeooo!”’s. Despite the pomp of VW’s entrance, they didn’t need any pyrotechnics, “HEY-OOOO”’s, or forced sing-alongs to completely level their audience. There’s no massive sore thumb hit they have to save for very last lest everyone leave: Vampire Weekend’s fans respect and adore their albums in totality, a rare achievement, nearly impossible when most of your friends are under 21.

Jon Caramanica’s review in yesterday’s New York Times smells off—it’s a strange, ineffectual hedging of bets, starting with his assessment of Barclays: “That arena in Brooklyn doesn’t feel like the monument it was intended to be, or the rude intrusion it seemed destined to be. It sits there, more or less quietly, taking in several thousand people on game or show nights, then expelling them with little fanfare. Post-event, the crowds tend to dissipate quickly.”

Should they be tap-dancing? What are you even saying? For what it’s worth, I got a chill coming out of the subway and craning my neck to the see Barclays’ massive smooth blue facade hanging over, even though I’d seen it before. “But it is still possible to wring some meaning out of those ruddy steel panels.” Ugh.... okay. Caramanica first says their mega-hits like “Oxford Comma” “often failed to fill the room,” then immediately hedges, “the sweetness of their melodies, which have always trumped whatever archness the lyrics provided, still made an impact.” What does this mean? He also claims the band was “guilty of excess” by performing one verse of Blur’s “Song 2,” a cool bit added at the end of a re-worked “Don’t Lie.”

After spending several hundred words communicating with his teeth closed and his nose raised, Caramanica ends by bizarrely contradicting himself, calling them “a group that had figured out how to make its little songs sound huge.” Obviously, they’re still super polarizing, and even Times writers are running in circles, unsure if liking this band is really cool or reallllllly lame. This is a strain that runs through every segment of people aware of Vampire Weekend: they don’t know if it’s safe to say they’re fans. People that would normally love this band wouldn’t be caught dead in a t-shirt because of a million things: they’re preppy, fey, shamelessly pop, enjoyed by a young, naive audience. So what? They’ve yet to release a weak record, call me when a stepchild shows up.