The Deepest Dankest Past Colliding With The Deeper Danker Future

An interview with Robert Rumrill of 2 Ton Bug. 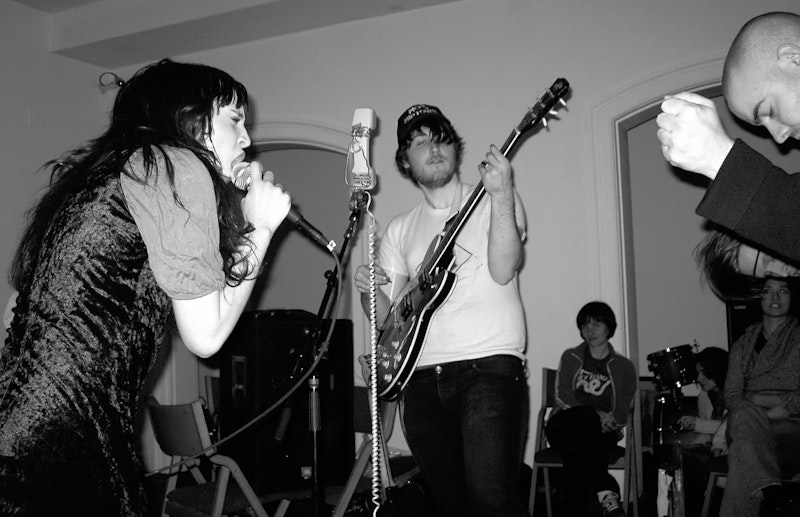 2 Ton Bug is elevating the art of the pun to a new level. The 2 Ton Bug is a band based out of New Haven, CT, and they play the kind of frenetic and blissfully silly thrash rock in the vein of Lightning Bolt or early Black Dice, but what separates them from those bands is an overwhelmingly gleeful and sincere sense of humor, without any of the cynicism and heavy-handedness of other noise acts. Member Robert Rumrill’s Twitter (@2TonBug) is a depository of some real absurdist gems: “If you thought the film proper was droll, you should view the scenes on the faux-pas reel!” “Diseases I don't want: the big brown rash, wrinkle belly, Bowfinger, Rudderman's plight, "???", STS (spontaneous tattoo syndrome), Puffs” “Ways to save the orphanage: ..... (somebody needs to help me save the orphanage)” “Could you read this text and tell me if thems fightin words?”  “hey, what can I say! I play it safe at mealtime! just TRY to de-bib me!” The puns and ridiculous scenarios Rumrill puts out there every day consistently crack me up, and are far more entertaining than any bunk Kanye West whips off. Rumrill’s humor and warm amiability were refreshing, and he’s by no means the typical self-serious experimental musician. He’s perhaps the funniest man on Twitter, and I caught up with him briefly over email recently.

SPLICE TODAY: What is the 2 Ton Bug? Who's in it? Who writes the Twitter?

ROBERT RUMRILL: Here we go: 2 Ton Bug is me and my three very, VERY good friends making space-blues music in and around CT with guitars, telephones, and trash cans. @2tonbug is me making quips with my thoughts and my thinkin, and the 2 Ton Bug is probably a big-ass mantis but I'm very open to other interpretations (within reason).  That's pretty much the 2 Ton Bug disambiguation page.

ST: What are some of your comedic influences?

RR: My comedic influences would definitely have to be the people and things that shape what I find funny! Hahahaha, but for REAL with this comedy stuff I enjoy Andy Kaufman, Norm Macdonald, Steve Martin and things like the golden age of animation, Fluxus, a funny voice, a scary man, a scary beast, or a frightening man...LIFE, Y'KNOW?!

“Gimee any Sports Illustrated swimsuit issue, and I can tell you which pairs are "fake" (some glass eyes are really tough to spot, though)” –Robert Rumrill

RR: The deepest dankest past colliding with the deeper danker future. My personal trinity is Doo Rag, Devo and delta blues (the legends thereof) but everyone in the band listens to all kinds of stuff. We all like: house shows, Coachwhips, the relationship between school/work and stinking, big ol' breakfasts, Dr. Seuss. I am HUGELY influenced by booms, bangs, and dings as well. A funny voice, a scary man...

ST: How would you describe your sense of humor? How do the Twitter jokes connect with the band, if at all?

RR: HMMMM...I guess it's kind of like taking the advanced course in "dumb as hell." Like, mega simple. The jokes and the songs are not truly connected, yet they both come from the same lil’ universe. I actually think it's darn neat that people can like the band but think my tweets suck, BUT ALSO vice versa. All the other band members have top-notch twitters, too!

“My fortune, wasted on the construction of this disgusting leather house.” –Robert Rumrill

ST: Do you incorporate comedy into your live shows? Stand up or otherwise? I get this feeling that you guys would be the crazy house band at some dive comedy bar (I mean that affectionately), playing thrashy rock instead of lounge music.

RR: [Laughs] We're working on it! At shows we're usually playing to a basement or kitchen full of sweaty guys 'n gals who probably don't want to hear my impression of "a guy who has no idea about autumn." We try to crank the songs right out. I did stand-up once, and I'd really like to do it again. If we had the scratch, we'd take 2 Ton Bug peddling around this fine country as one big traveling slop-circus with music and comedy and stunts and sketches. We should shoot what you described in your question as a tv pilot.

“Your favorite toy comes to life, but then turns out he's the type of guy who pulls his pants all the way down at the urinal.” –Robert Rumrill

ST: What are some other jokes or ideas or thinkin’s you've been thinkin’ lately?

RR: Let's see here, I've been working up the gumption to do this joke: "My script for a Twitter movie got rejected for having too many characters in it" but it seems so obvious that I feel like I'm not the first one to think of it!  On the business end of things, I've been trying to book this tour we're going to do in August with Bees (from Binghamton), finishing up album art for pressing Wedding of the Century, I want to get through this ‘zine I'm doing of big pictures of cartoon characters yelling normal things...working on some jokes involving subjects like the song "We Are Family," private eyes, the "original party animal," and a New Haven-only tweet. The guy who has no idea about autumn is a character I do when I did standup. It's a man getting ready to start his day, grabbing his keys, making sure he has his wallet, checking the time...and when he finally opens the door to leave for work, he looks all around him in amazement and goes "...ohhh shit..." he lives in between "the sarcastic kindergarten teacher" and "the newscaster who just got back from lunch."

ST: Your jokes and sensibility feel very much of an era, of our generation.

RR: I don't feel that anything I do can/should be intellectualized to any extent. I'm not trying to be the voice of anyone but lil’ ol' me...it's seriously just all about not boring myself to death. I like young America just as much as old America and ancient America and mid-life America and second-life America...I'm not one to play favorites. Hahaha, maybe I'm just channeling the thoughts of America, and we'll leave it at that.

Wedding of the Century, 2 Ton Bug’s debut album, is available now on Bandcamp (pay what you want).