Nostagia for the win. 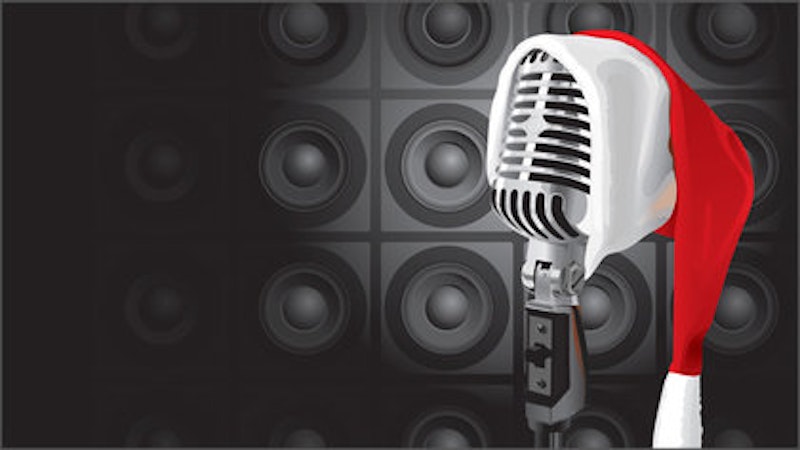 We’re probably all about done with the Christmas music about now, yes?

Since they started playing holiday music the day after Halloween, no matter how much a fan of the birthday of Jesus you are, it is completely annoying to have to hear “White Christmas” for the 367th time. Never mind “All I Want for Christmas is My Two Front Teeth” or “I Saw Mommy Kissing Santa Claus.” I’ve turned to the “Christmas Classical” or “Christmas Jazz” channels on Pandora to avoid "I Want a Hippopotamus for Christmas" and anything by The Chipmunks or Justin Bieber. People I'm old enough to be the mother of shouldn't be allowed to have Christmas albums.

So I was wrapping gifts and listening to non-Mariah Carey Pandora stations, and I thought about what I would put on a Christmas playlist if I were the kind of person who made playlists for things. If you could pick your five favorite Christmas songs, what would they be?

1.) Carol of the Bells—I don't mind a children's choir singing this, though I prefer just the plain old instrumental/orchestral version.

2.) Santa Baby (I know, it's a big change from the symphony choice. Get over it.) by Eartha Kitt. Not by anyone else. There should never be a remake of it. Ever. Not even Madonna, though hers was slightly cute. At least she is sexy. It’s a sexy song, and non-sexy people should never, ever sing and ruin it. Go home, Taylor Swift, and write Christmas songs about who broke up with you today, because your version of Santa Baby sucks compared to Kitt’s.

3.) Canon in D by Pachelbel. I don't give a shit if it is not a Christmas song, it is my favorite classical song and someone like the Trans-Siberian Orchestra or someone did like a Christmas cover of it, so I am happy to hear it this time of year.

4.) Anything by Straight No Chaser because I love them, especially their ironic use of the word “straight” in their band name. My fave is “12 Days” where they mixed the partridge deal with Africa by Toto, because how random is that?

5.) Songs from the Christmas albums of Perry Como, Johnny Mathis, The Beach Boys and Frank Sinatra, because that's what I listened to growing up so there's the whole nostalgia thing.

There's also a song called Breath of Heaven that I like by Amy Grant. No one knows that song, so I won't put it on the official list, but it's about Mary's perspective on the whole “birth of Jesus” deal, and I was named after her (which she would think was really funny if she knew about it) so I thought it was about time there was a song from her allegedly virginal point of view.

Also I love Harry Connick Christmas songs because he is both jazzy and cute. And then there's everything from the Nutcracker, which my mom took me to see in Philadelphia when I was a kid, which was a big deal because we were poor as church mice. Nostalgia strikes again.

—Mary McCarthy (@marymac) blogs at Pajamas and Coffee and would like to wish everyone a very Merry Christmas and a special thank you to all who read her work here at Splice.