The Transcendent Absurdity of R. Kelly

One unforgettable night in Oakland. 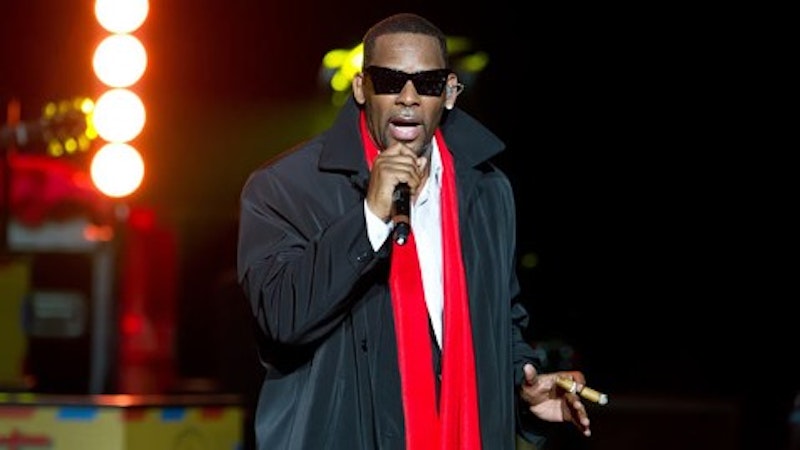 I went to a lot of memorable concerts in 2012, but one stands out so clearly I’m sure I’ll be telling my grandchildren about it as I force them to watch Trapped in The Closet for the 500th time. This show was so indelibly burned into my gray matter that months later I can still put myself back in that moment, and if you’ll allow me, baby, I will take you there.

As the curtain dropped and R Kelly descended down a white staircase onto the stage of the Paramount Theater on a rainy Halloween night in Oakland, the nervous anticipation of a packed house turned into full-bore exhilaration with the first hair-raising note. The moment was the culmination of years of proselytizing for Kellz, defending his shortcomings and continually marveling at the scope of his talent. Still, there was always the chance for a letdown; even tongue-in-cheek hero worship carries that kind of risk. After all, his mastery of production might not translate to the stage, and a recent throat surgery might rob him of his greatest asset. Turns out that if anything I’d underestimated R’s abilities, for his voice was mesmerizing.

Kelly strode around the stage for two hours, playing something like 40 of his hits, medley-style, in a white suit, backed by a band decked in all white and flanked by a pair of bartenders on stage, who were shockingly also decked out in white. The effect was somewhat romantic, semi-religious, but ultimately sparse, so as not to distract from R’s angelic pipes. As famously parodied by Aziz Ansari and Dave Chappelle, he even sang the ad-libbed interludes between songs, only taking a break from vocalizing his desires to get himself a drink or catch a pair of panties, tuck them in his pocket and continue seducing every woman in the building.

This tour, dubbed the Single Ladies tour, isn’t a reference to the Beyonce song. It’s an attempt to bring the women out, because as R adeptly puts it: “Where there are single ladies, men will go.” Real talk. And the crowd did seem to be mostly made up of women, R’s core constituency and most ardent backers. Every new song never failed to induce screaming, and judging by her shrieking, I’m pretty sure the woman next to me had multiple orgasms.

His range was incredible—he sang early hits, he sang Opera in Italian, he sang a cappella, he never strained or missed a cue, and the two perfectly paced hours he spent onstage flew by, with the crowd remaining on their feet the entire time. Even with its technical precision, the show didn’t seem scripted—and if reports from the next nights show are evidence, each show features a new set list and different props.

That’s what R Kelly has proven over the last 20 years: He knows how to entertain. He may not know much else, but he’s a singing savant, and the perception he might go off the rails at any given moment doesn't hurt his allure much either. If R. Kelly and all his trappings seem absurd, it’s because they are. His career is a miracle Hollywood couldn’t script.