Whartscape 2009 was a perfect balance of big crowds and the collective's trademark familial intimacy. 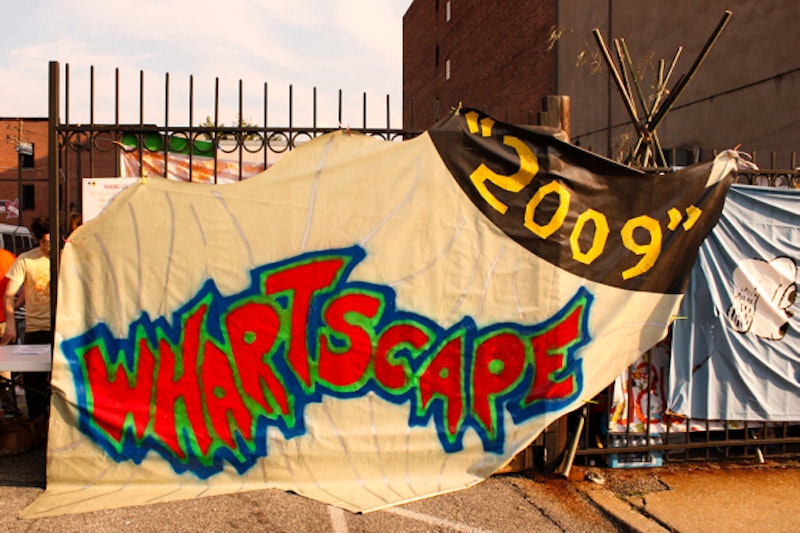 I walked into the first night of this year’s Whartscape music and arts festival feeling a bit uncomfortable. After attending shows hosted by or affiliated with the Wham City collective for a few years, I’ve begun to recognize a lot of the regulars. And yet, I can’t really talk to many of them, so I’m stuck in this weird sort of social gray area, where I recognize and am recognized yet not well known enough to engage or be engaged. It’s pretty intimidating not talking to anyone at shows, so I’ve always kept close friends near.

Wham City has always been about community. The core of the collective consists of a handful of SUNY Purchase alumni who moved to Baltimore because of cheap rent and a promising music scene. The broader Wham City circle is too large to recount in detail, but it’s safe to say that they have friends in just about every niche of Baltimore music, from noise luminaries Twig Harper and Jason Willett, to indie darlings Wye Oak and Celebration, to electronic and glitch pioneers Matmos. It seems some facet of Wham City exists everywhere; so the lineup for this year’s Whartscape was particularly diverse, a sampling of what Baltimore has to offer, as opposed to the lineups of years past, which featured more touring bands with significantly more name recognition.

I missed most of Friday, not entering the Baltimore Museum of Art until 7 p.m. to catch Pierson and Fitzgerald’s The Title Sounded Better in French, which was already in progress. Friday’s acts consisted of mostly theatrical fare and video work, with musical performances mostly relegated to the outdoor portion on the museum’s front steps. I left only two hours later, anticipating a long and exhaustive two days ahead in the MICA parking lot on North Ave. and two nights at the Load of Fun space across the street.

The setup in the MICA lot remained mostly the same from last year, except for the removal of a third stage that sat along the lot’s right wall. A schedule change (another Wham City signature) had The Art Department starting off on Saturday afternoon, with Human Host, The Pleasant Livers, and Weekends soon to follow. Much of Saturday and Sunday afternoon at Whartscape was time for relaxation and observation. People-watching was infinitely entertaining; I saw more types of cutoffs than I thought existed, and learned that a lot of people really do like wearing backpacks. Day turned into night and the optimistic dance pop of the light turned into harsh, uncompromising noise at the Load of Fun. The highlight of the night was easily Needle Gun’s tribute to Billy Mays, a performance art/noise clusterfuck that left me completely dazed. Hair Police and C. Spencer Yeh of Burning Star Core played great sets, but drained as I was by being in a hot parking lot for 12 hours, it was tough to enjoy.

I was back at the MICA lot on Sunday, this time arriving around 5 p.m., hoping to retain some facet of energy by the time the Load of Fun show started that night. I knew the lineup looked a lot more promising: sets from Santa Dads, Teeth Mountain, Double Dagger, Wolf Eyes, and the Dan Deacon Ensemble, all more or less back to back. Double Dagger threw at least 10 plastic inflatable drums into the audience after Wham City made a point of making “no throwing drums into the audience,” a rule after drummer Denny Bowen did just that at last year’s festival, but with a real drum that left someone in the hospital. Nothing that dramatic happened this year (with the exception of Shams lighting a Polaroid and a dead pigeon on fire at Load of Fun later that night), and Double Dagger seemed ecstatic to finally be home after a three-week national tour.

Just two hours or so later, Dan Deacon and his ensemble were preparing, taking their time as they set up an impossible amount of gear onto the tiny “A” stage, eventually leaving to have a “brief meeting.” As Blind Melon’s “No Rain” played over the PA system, one could see the ensemble behind the stage, locked in a huddle, dancing to the music, a pre-performance ritual that doesn’t seem to exist anymore anywhere but in arena dressing rooms and VH1 documentaries. They took the stage just as the song climaxed, launching into a set that was truly legendary. It was not without glitches and blemishes (missed cues, malfunctioning equipment, falling lights), but those imperfections really did seem like virtues. The ensemble’s performance seemed to represent the Whartscape festival as a whole: at any moment, anything could happen, and everyone was happy to embrace it.

Before the set was over, Deacon talked about the decision to make the festival smaller this year, and why they sold only 300 “mega-passes” (tickets that guarantee entry to all shows throughout the weekend). He said that Wham City wanted to make the festival feel more like a gathering of friends than a gigantic press event, and that focusing on good, hard-working local bands was more important than securing big-name headliners as in previous years. This confirmed what I had felt being in that parking lot the last two days; that it really did feel like I knew everyone there. And it wasn’t awkward, or uncomfortable. Everyone just wanted to have a good time.

For a moment during Deacon’s speech, it felt like we were all a part of something great, something important. Everyone was happy, and there were no jerks. For once, Wham City had achieved the equilibrium that they’ve been seeking since moving to Baltimore, between getting good crowds and keeping it personal. Whartscape is possibly the biggest DIY music festival on the East Coast, yet it still just felt like a bunch of friends enjoying something together. The tension that used to pervade big Wham City events was gone, replaced only with optimism and a sense that where you were right then was the most important place in the world, for just a couple nights. That’s a pretty amazing feat for a small art collective in this city.

After his set, the aggravation and stress that Deacon emitted all weekend was gone, his biggest obstacle behind him and the festival that he and a few friends organized almost finished. During DJ Dog Dick’s set at Load of Fun, I saw him at the front of the stage bobbing his head to the music, blending into the crowd and enjoying the fruits of his labor. No one deserved it more than him.