Welcome to Baltimore, It's Not Like This Every Day

Whartscape 2009 provided a great introduction to Baltimore for one newcomer. Maybe too great... 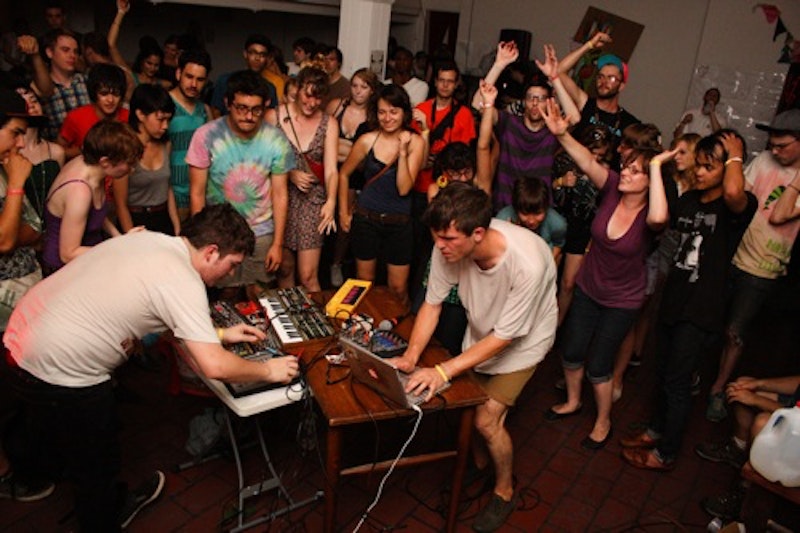 Nestled impressively within a square of janky wire fencing in the MICA parking lot, Whartscape and its bulky roster of musical acts, along with the legions of community supporters and food and craft vendors, partied joyously earlier this month for three days straight, creating a sense of familial bond that's usually reserved for a family reunion or at least transported to a more private setting. This was essentially my introduction to this side of the Baltimore music scene, something I had visited many times through blogs and friends' car stereos, but never in person. I was told that the 2009 edition featured more local bands and capped mega-pass sales at a smaller number than usual, but the open performance sites funneling out to North Ave. and on the steps of the BMA nonetheless gave a sense of openness and connectedness.

Technically you needed a ticket to participate in some of the events, but if you were in the neighborhood you could at least listen to the jams from a close distance. Then a week after Whartscape, with the sights and sounds still fresh in my mind, another campaign of performance art, concerts, and general fanfare swept the city of Baltimore in the guise of Artscape. It was like a double-punch of quirky, city art culture that manages to immediately instill in you a sense of hometown pride, even if, like me, you just moved here four weeks ago and have yet to see Baltimore in hibernation. With one very busy month of Baltimore under my belt, I'm left with a surprisingly familiar dilemma: I've just moved to a city during one of its most joyous times of the year. Am I being set up for disappointment?

I was essentially handed a mission when I first arrived here. My friend Jon and I stopped by True Vine records on Hickory Ave. in an attempt to rid ourselves of some records that had been lying around his parents' basement. It was a sufficiently embarrassing collection of albums with several Bette Midler titles buried inside. After discussing the value of a random Bright Eyes tour-only EP that somehow ranged between $5 and $300 depending on the source, the co-owner and Baltimore music guru, Jason Willett, asked us if we were moving to the city. I replied yes, to which he declared, “Cool, ‘cause we have to un-jade the jaded.” Jon and I nodded without a real good sense of who the jaded were or how we were expected to un-jade them.

That statement lingered in my mind as I entered the MICA lot on Saturday afternoon. Was he referring to the residents who live in Baltimore but work in DC? Or was he talking about scene jumpers who just recently boarded the Wham City bandwagon? In any case, between the alternating stages, spandex get-ups, and unpredictable sets, the lot was hardly a space for private contemplation. The attentive concertgoers vibed to Little Howlin' Wolf's free-jazz, blues numbers and even embraced the hardcore sounds of Brooklyn-based outfit Liturgy.

I'll admit, I found it hard to reconcile the joys and frustration of Whartscape. Clearly, this is a movement built on creativity, participation, and above all, collaboration. Bands share members and organize shows for one another. But it's more than just music. Musicians and artists and entrepreneurs work collectively and support group projects. When I wandered into the newly opened Cyclops bookstore/coffee shop/community center, there were friends and strangers gathered together discussing a fix-up of the ceiling and overall beautification of the space. But despite this positive atmosphere, I felt disconnected. It's hard to swallow the preciousness of Whartscape's eccentricities and the limitless Dan Deacon praise in all Baltimore media outlets when you have no sense of ownership. After all, I have no history here. In my colleague Nicky Smith's pseudo-review of Whartscape 2009, he ends his piece on a sentimental note: "I saw him [Deacon] at the front of the stage bobbing his head to the music, blending into the crowd and enjoying the fruits of his labor. No one deserved it more than him." This echoes the thoughts of most of the city's born and bred. For Nicky and so many others, Wham City and all of its burgeoning performers aren't just isolated musical acts. And their friends and fans aren't simply admirers. They have played a direct role in the development and maturation of the friends they support.

I mentioned earlier that this all feels familiar. Five years ago, during my first visit to Ann Arbor, MI, the city was in full-on celebration mode. Clubs and organizations lined up and down the vast "diag," bands performed impromptu sets, and Frisbees and footballs floated through the air every couple of seconds. The sensation during "welcome week" was extremely stimulating but not without a brief moment of deflation. I knew very few people in the city, which meant that there were not many shared memories, just observations. Knowing that in just one week all of the fanfare and celebration would be traded in for a more mundane routine, I saw my excitement change to anxiety.

The reality however is that while college memories are full of group events and football games, the most valuable moments occur in the quotidian and often by accident. Learning a city and contributing to the community is not accomplished in one swoop, and the same can be said about understanding a particular music culture. I bet many people will point to Whartscape 2009 as their most precious music-themed memory of this past year, and I'm happy knowing that, for me at least, it will probably be overshadowed by something on a much smaller scale but with a lot more invested and lot less notice.